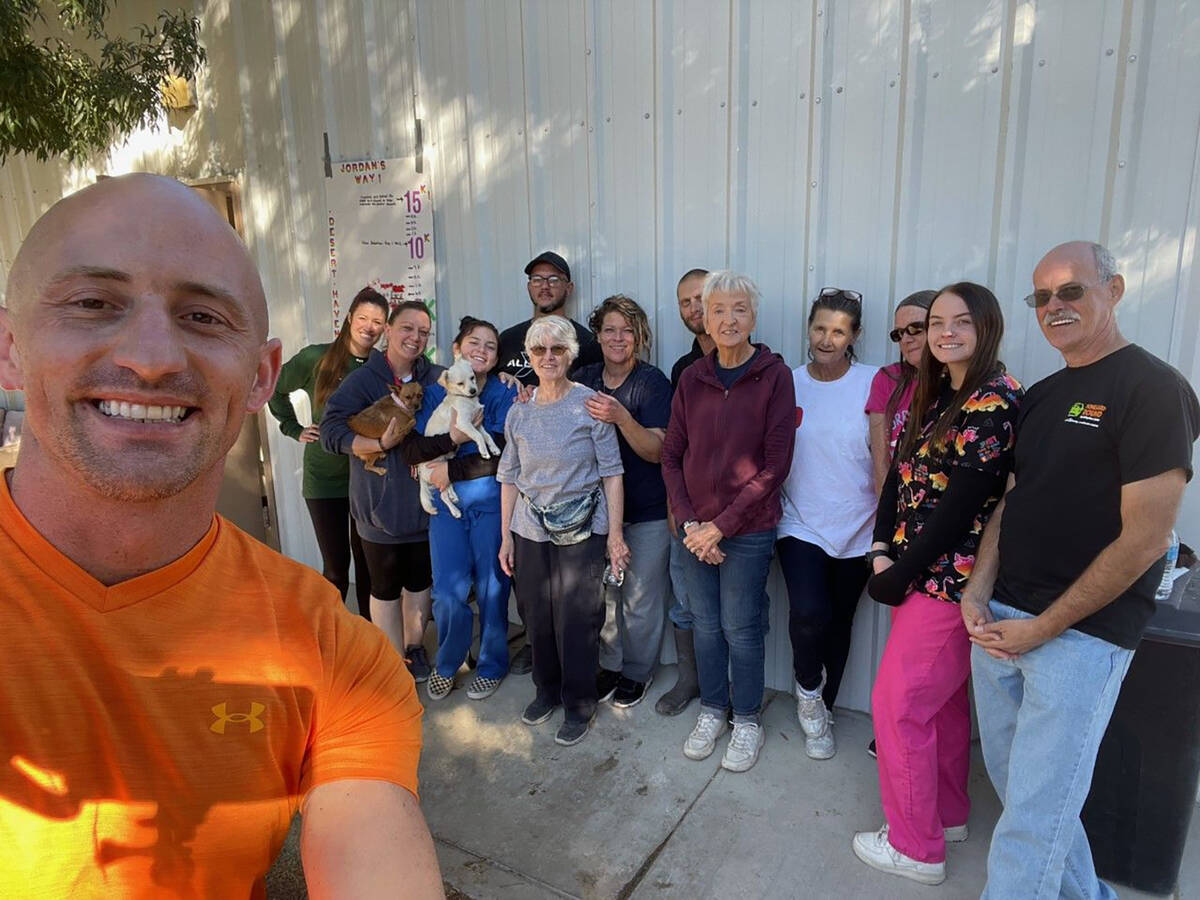 Special to the Pahrump Valley Times Jordan's Way founder Kris Rotonda, far left, poses for a selfie with fellow volunteers and Desert Haven Animal Society staff and volunteers during a fundraiser that raised thousands of dollars for the local shelter. 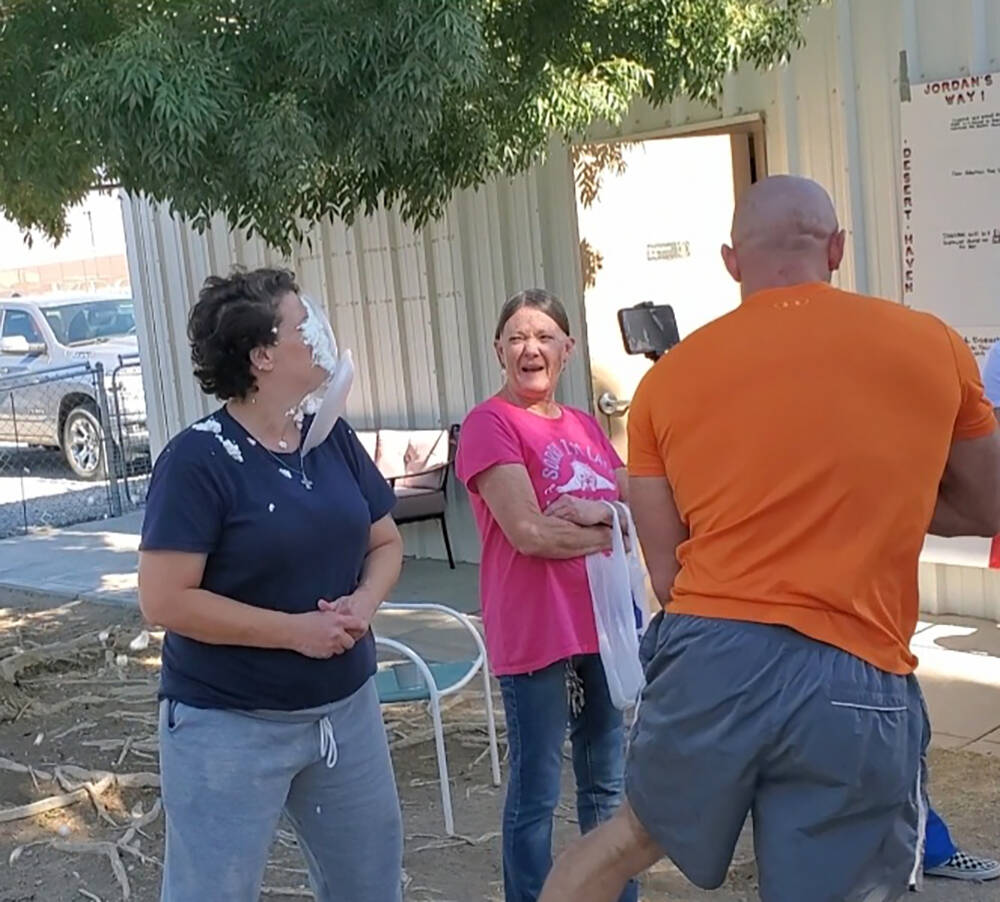 Special to the Pahrump Valley Times A Desert Haven Animal Society representative receives a pie in the face as part of the fun and activities that took place at the Jordan's Way fundraiser earlier this month. 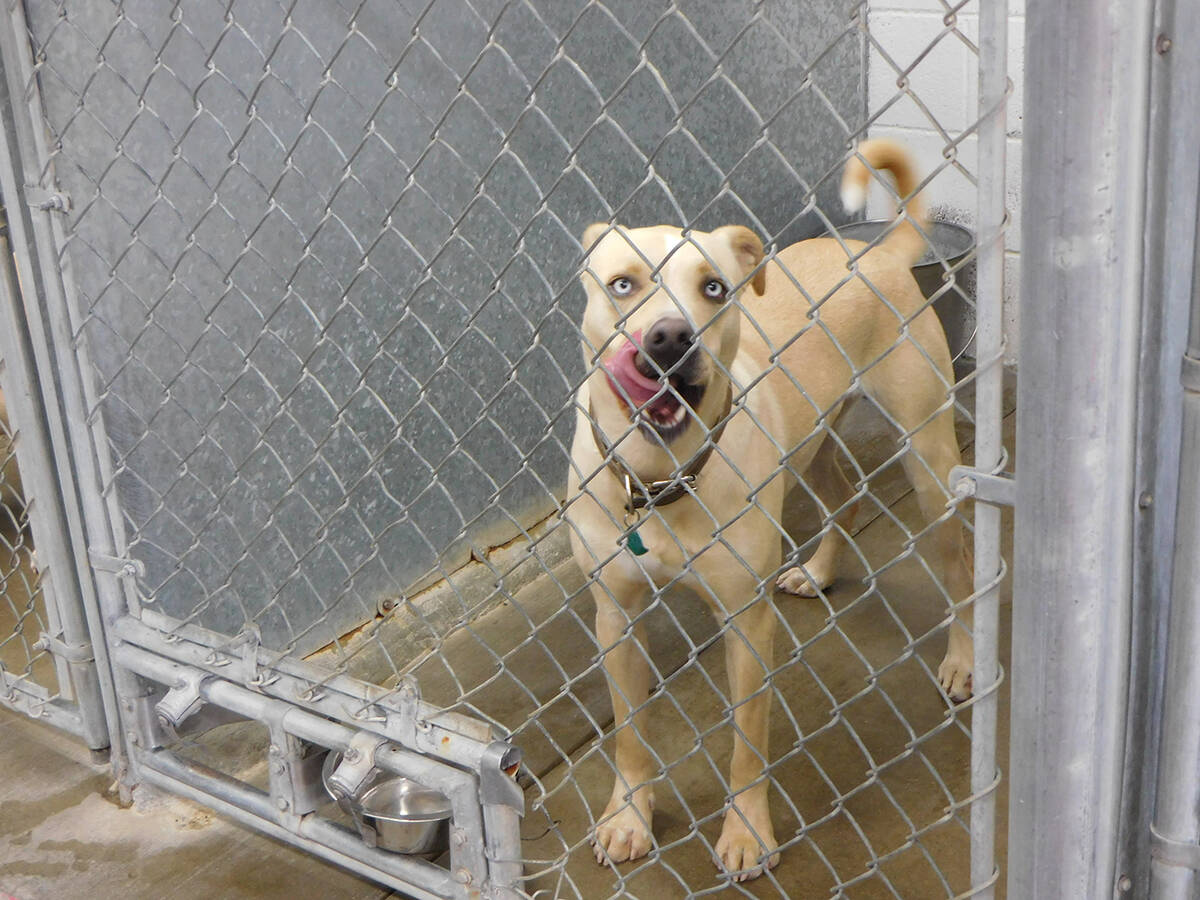 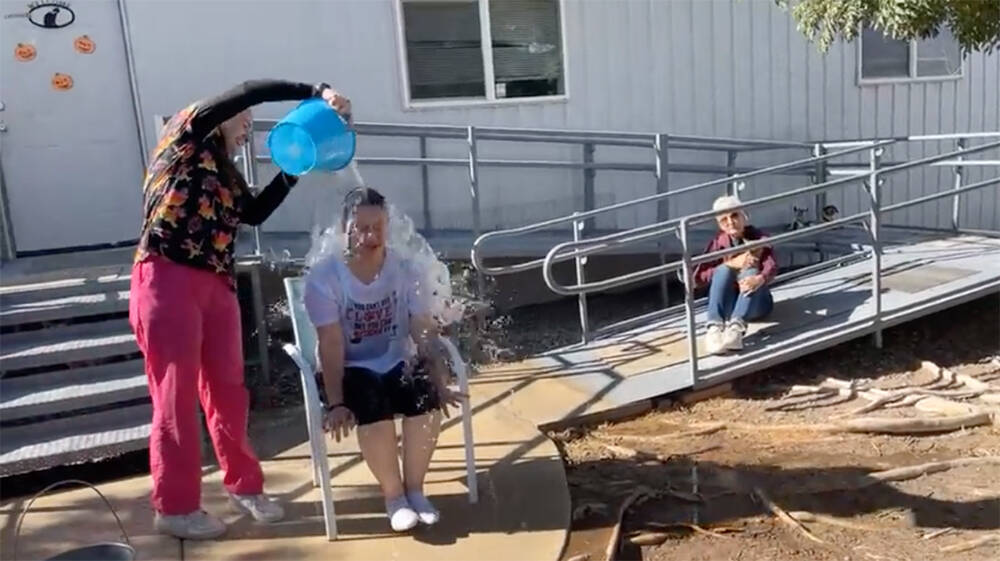 Screenshot This screenshot taken of the Facebook livestream of the Jordan's Way fundraiser shows Desert Haven director Beth Kakavulias being deluged in icy cold water after the event surpassed the $5,000 mark. 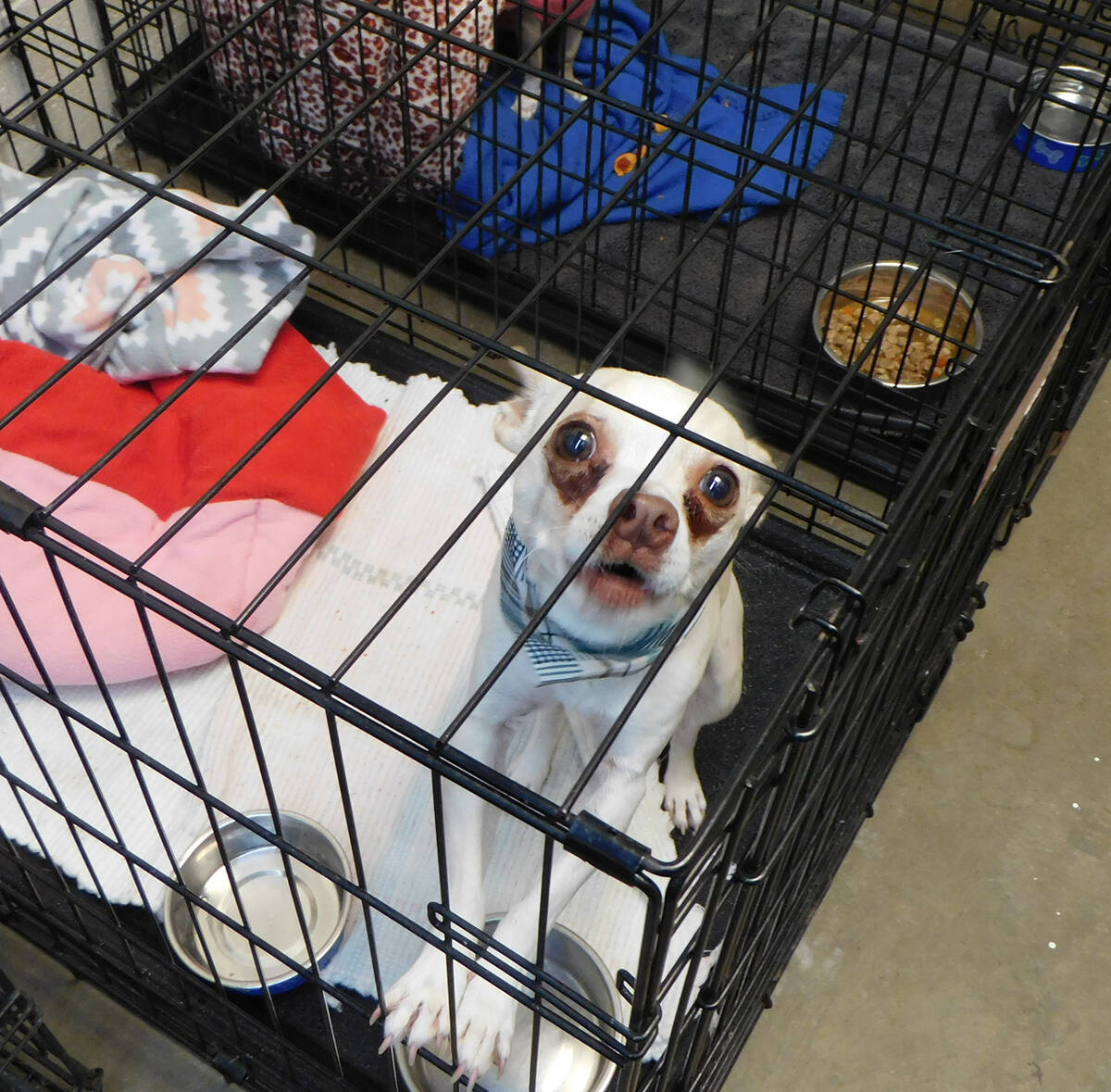 Robin Hebrock/Pahrump Valley Times Desert Haven Animal Society is the temporary home of dozens of furry friends who are looking to be adopted by their fur-ever family. 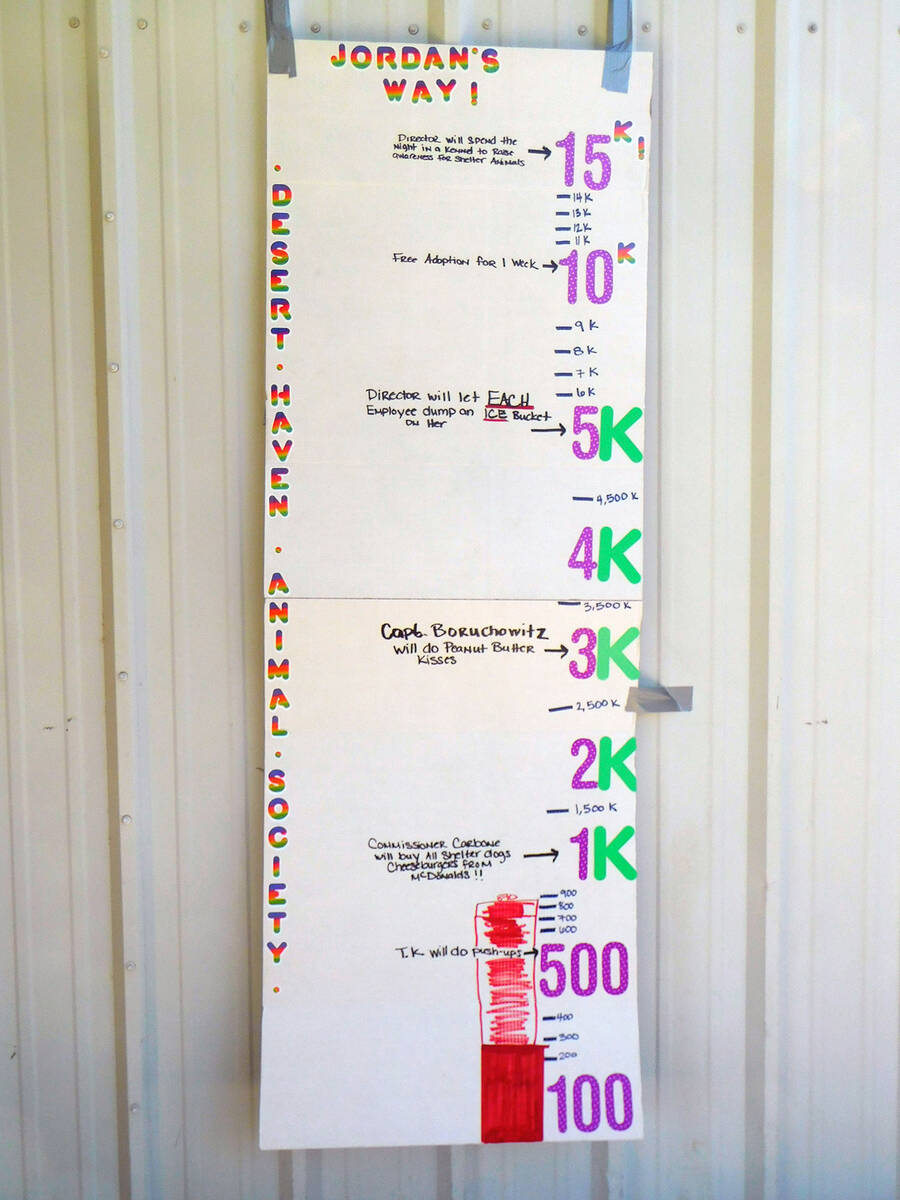 Robin Hebrock/Pahrump Valley Times This photos shows the Jordan's Way goal meter, with each major fundraising goal associated with an activity that would be performed if that goal was met. In total, the event raised over $8,000 for the local shelter. 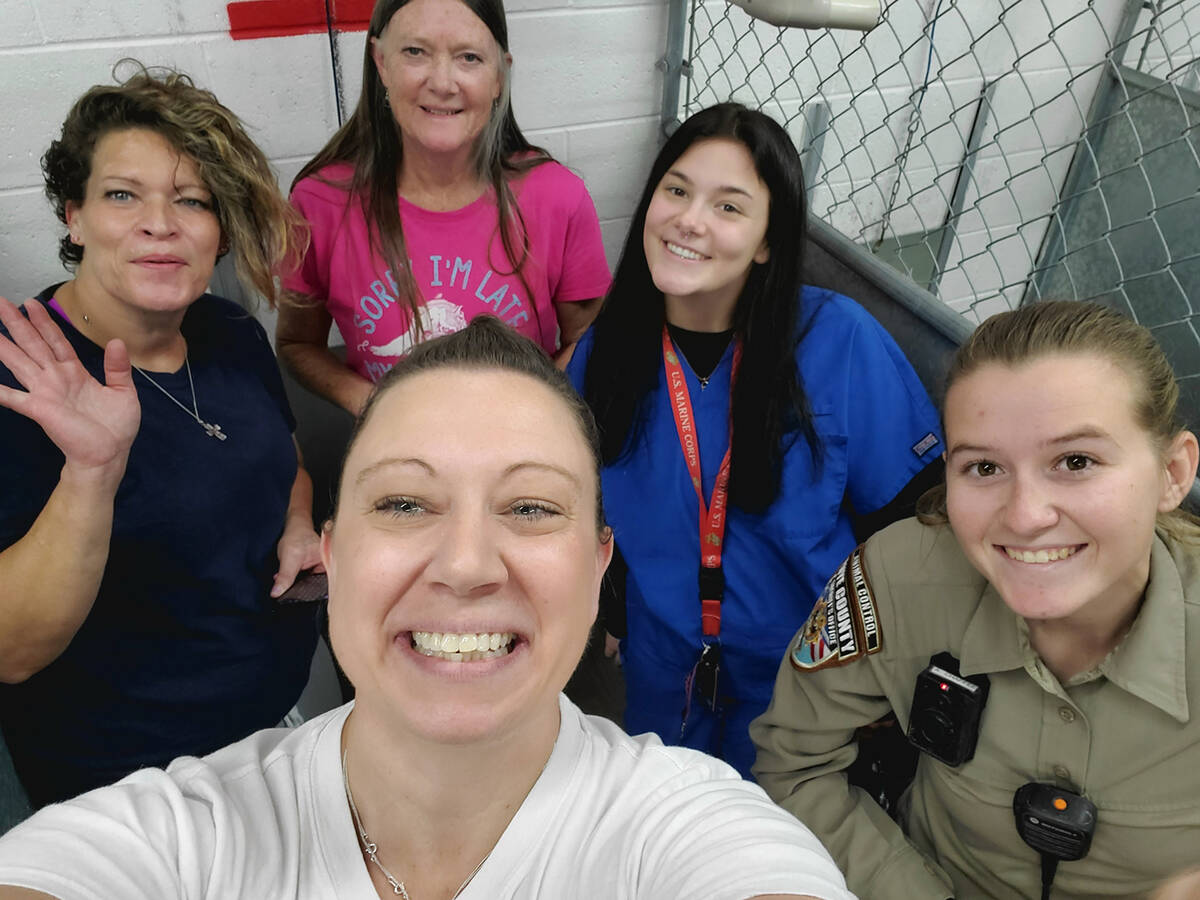 Special to the Pahrump Valley Times Desert Haven Animal Society Director Beth Kakavulias snaps a selfie with fellow Jordan's Way event volunteers, all grinning in delight at the success of the endeavor.

Desert Haven Animal Society got a big boost to its coffers this month, thanks to the effort of a national nonprofit organization dedicated to educating the masses about animal welfare and the need for communities to support their furry friends.

The Jordan’s Way fundraiser kicked off just after 10 a.m. Nov. 8 with a team of staff and volunteers from both Jordan’s Way and Desert Haven, each of whom were eager to do whatever they could to bring in as much cash as possible over the course of the four-hour event.

Livestreamed to Facebook, the fundraiser was able to reach out not just to the local community but to animal lovers all around the country, bringing in more than $8,000 was raised, which surpassed all of the shelter’s previous fundraisers.

As everyone prepared to go live for the event, Jordan’s Way founder Kris Rotonda took a minute to speak with the Pahrump Valley Times.

“The 50-state tour started in January, and it’s been crazy, a lot of traveling,” Rotonda said. “This is my 41st state, and we are almost done with the first round. We plan on doing this many times over.”

Rotonda said when Jordan’s Way began its new endeavor at the beginning of the year, the group had almost no social media followers. But after 10 months of effort, there are now over 330,000 who follow the organization’s activities.

“It’s just been amazing, it’s been so well received across the country, especially by people like you, the media, the newspapers and TV, everyone has just been picking it up,” Rotonda said. “We’re bringing all these people to one platform, and I just know that next year, when we come back here, it’s going to be even better. Every year I want to double and triple the outcome.

“My dog Jordan came from a place like this, a shelter, where she was for three years before I adopted her. And I always said, after I got her, that I wanted to do something to help shelters and rescues, and here we are now.”

He noted that he had started on a much smaller scale, localizing his efforts in his home state of Florida, but it didn’t take long for him to expand his outreach to other states.

Now, with a 50-state tour nearly complete and so much passion and zeal apparent throughout the process, he is optimistic that Jordan’s Way will only continue to grow into the future.

One of main features at each of the Jordan’s Way fundraisers held at various shelters and rescues around the U.S. are the challenges that are created to increase donations. For the Desert Haven Animal Society event, there was a large poster taped to the side of the building denoting each of the financial milestones that were targeted, with associated activities listed.

These included Nye County Commissioner Frank Carbone purchasing cheeseburgers for all the dogs once the $1,000 dollar mark was passed; Nye County Sheriff’s Capt. David Boruchowitz doing “peanut butter kisses” with the canines when the $3,000 goal was reached; and Desert Haven Animal Society Director Beth Kakavulias allowing every shelter employee to dump a large bucket of ice cold water over her head once the $5,000 mark was passed.

All of those goals were reached, and Rotonda is confident that when Jordan’s Way comes back to Desert Haven, the 2022 fundraiser will have an even better result.

“The event was fantastic; we raised over $8,000 in just four hours,” Rotonda said afterward. “My favorite part was getting to know the animals, especially the longer-term dogs like Pete. The staff also might say the highlight was when we hosed them all down in the kennels!”

When asked what he felt was the most important thing for people to understand about animal welfare, Rotonda said: “Don’t judge a book by its cover. The shelters are not dark, ugly places but places where the selfless work to do amazing things to help the animals there. Also, the animals at shelters didn’t put themselves there. Go to your local shelter and give them a chance.”

Rotonda also offered his gratitude to all the staff and volunteers that dedicated their time and energy to ensuring such a successful event.

“First off, I want to give a huge thank you to Beth for allowing my team to come and meet such an amazing group,” he said. “I want to thank the donors who each supported this shelter in a rapid speed of hours with only a week’s notice. Then, a special thank you to my amazing team from the top to the bottom for bringing this all together.”

For more on Desert Haven Animal Society, stop by the shelter at 1511 Siri Lane or visit its Facebook page.