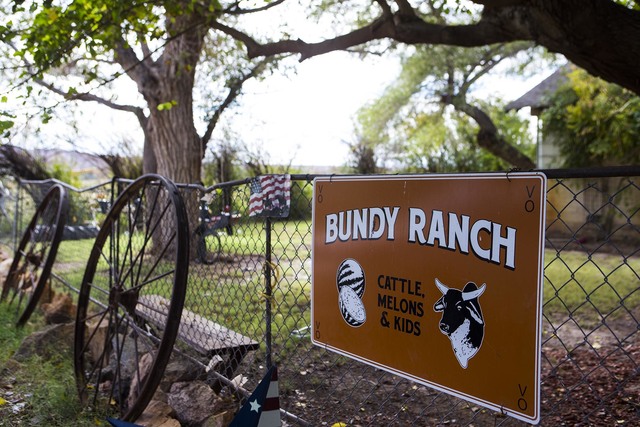 A sign is shown at Bundy Ranch in Bunkerville on Friday, Oct. 28, 2016. A federal judge has ordered three separate trials for the 17 defendants in the armed standoff case involving Nevada rancher Cliven Bundy. Chase Stevens/Special to the Pahrump Valley Times

The order was issued late Monday by U.S. Magistrate Judge Peggy Leen. Under the order, the trials will be grouped based on three separate tiers of defendants.

Under the order, the third tier of defendants who are “least culpable” in the standoff case will be tried first, with the initial trial for six men starting Feb. 6. The defendants in that group are Richard Lovelien, Todd Engel, Gregory Burleson, Eric Parker, O. Scott Drexler and Steven Stewart.

That would have put the 70-year-old rancher up for trial first, along with others in his tier: his sons, Ryan and Ammon Bundy, and Pete Santilli and Ryan Payne.

However, Leen wrote in the order, it seems “more fair” to try the lowest tier of defendants first, adding that their trial likely will be shorter than the other trials for defendants who are in higher tiers.

Under the order, Cliven Bundy and others in his group would be in the second trial, which would start 30 days after the first trial ends.

Santilli’s attorney, Chris Rasmussen, said he plans to file a written objection, adding he wants his client to be tried first. He said it would be more efficient to have two trials, each with eight or nine defendants.

The second tier of “mid-level” defendants would be in the third and final trial. The second-tier defendants are Bundy sons Dave and Mel Bundy, Joseph O’Shaughnessy, Brian Cavalier, Jason Woods and Micah McGuire.

Defendants have requested a variety of arrangements for the trials, with some seeking separate trials. Cliven Bundy previously had requested to be tried last if there are separate trials, saying he wants the other defendants to be able to return to their families and jobs quickly.

All of the defendants are in federal custody.

The defendants face federal charges that include conspiring to assault federal agents on April 12, 2014, several miles from the Bundy ranch near Bunkerville.

Prosecutors allege the armed assault unfolded as the Bundys and their followers moved to take back Bundy cattle that had been impounded by Bureau of Land Management agents.

The impoundment happened after the BLM had obtained court orders to seize the cattle because no grazing fees had been paid to use federal public lands on which the cattle roamed. The events in 2014 drew hundreds to the Bundy ranch, including patriot and militia groups from throughout the West.

Ammon and Ryan Bundy were acquitted in October by a Portland jury after being tried in connection with a 41-day armed takeover of a federal wildlife refuge in Oregon.