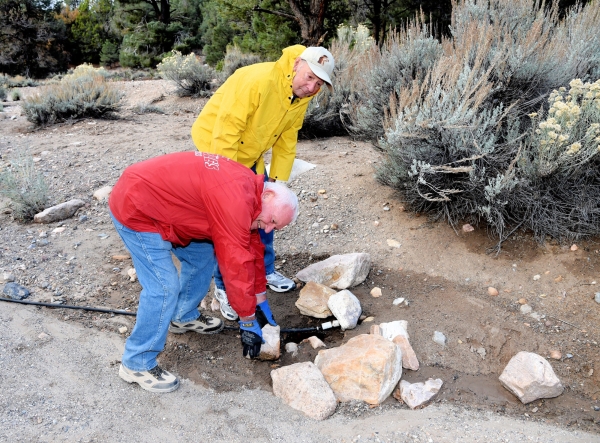 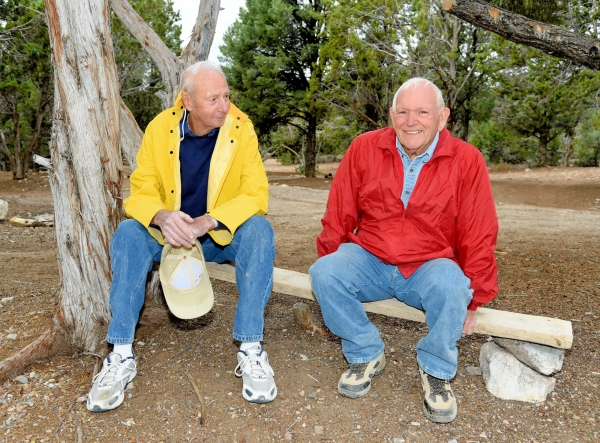 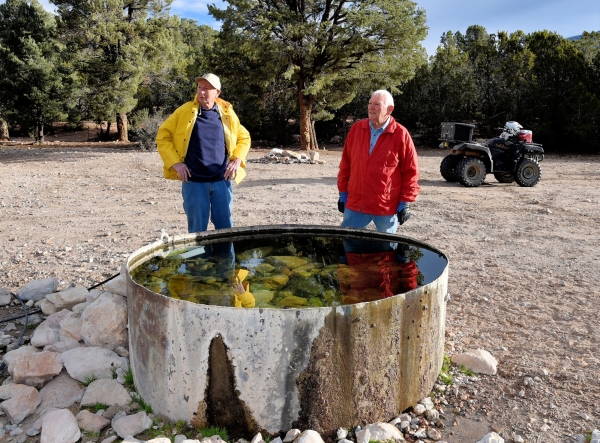 He heard the gurgle of the cool refreshing water of the well for the last time and he said goodbye to all his wildlife friends.

Dick Senior, the longtime “Keeper of Wheeler Well,” made his final journey up the mountain on Wednesday morning.

Senior is retiring from his duties and moving out of state for health reasons.

He is now 87 years old and has decided to move to California to be closer to his daughter.

Senior found the well in disrepair in 2002 and fixed it up for the wild horses and animals in the area.

The well is a 500-gallon tank, in the middle of the Wheeler Wash at an elevation of 6,000 feet in the Spring Mountain Range. It was first started by the Bowman family for their cattle sometime around 1957. The well is fed by a mountain spring.

He has maintained the well at his own cost ever since.

“I really wish I was 15 years younger, but my health is failing and I had to do something about it and so I sold my house and am moving to Banning, California so I can be closer to my daughter,” Senior said. “I think I got something like Valley Fever. I feel terrible and I wish I didn’t have to leave.”

His replacement will be 74-year-old Mike Crouch, who is also a close friend of Senior’s and has helped him fix the well numerous times.

“I have been friends with Senior for about 13 years,” Crouch said. “I have been up here with my friend too many times to count.”

He said he is so sick that his kidneys stopped working and he now does dialysis three times a week.

“The dialysis is only temporary, in fact my kidneys have started working again, and I am still pretty active, but I need to be close to someone in case I get sicker,” he said.

Carol Cantino, president of the Western Branch of the Red Rock Audubon Society, said she has spoken with Senior on numerous occasions.

“I met Dick through Audubon,” Cantino said. “I knew of him before our actual meeting by reading newspaper articles about the Wheeler Well. Besides the well, Dick has built bluebird boxes and installed them up on the mountain.”

Cantino said RRAS has taken on the task of cleaning/repairing his bluebird boxes.

“He selected the location for these boxes with access to water in mind,” she said. “Boxes are placed not too far from water sources that he knows about. I believe he is active with the wild horses and I think the man knows of, and has visited and cared for, every spring/water source on the west side of Mount Charleston.”

This is true. Senior is a resident expert on the wild horse population.

“At one time there were 75 wild horses near the well and now there are only around four,” Senior said. “I had names for nearly all 75 horses and knew them by sight. When the horses were abundant I met a horse that I called Howdy, because he came around so much, that’s what I said every time I saw him. Howdy came to the well one summer and the well was dry. He was with another horse. I was able to take out a container of water and empty it into the well. I went right between the two horses to do it. Within minutes, five to 10 other horses came out of hiding.”

Senior said he grew up with horses as a kid and even owned his own horse in Pennsylvania, where he is from.

He said he the he will miss most the hours he would spend with the wildlife near the well.

“This is probably my last trip up here,” Senior said. “I would come up here at 10 a.m. and spend until 1 p.m. just sitting over there, (he pointed to an old broken sign that had been turned into a bench), watching the deer, elk and horses and even the birds drink.”

Senior said as long as you don’t move much and are quiet, the wildlife just comes out of the trees and you are only sitting some 100 feet from the well.

“The deer will come to the well and most of them will drink from the puddles caused by the overflow,” Senior said. “The deer are just too shy and the water moving in the well from the wind, scares them.”

Senior said the busiest time of year for the well is after spring, when the water starts to dry up. Then in August, the water dries up at the well. In the wintertime, he said there is nothing up here because the well freezes.

He said deer will come from miles away for a drink and sometimes there will be nearly 30 around the well.

Senior has done quite a lot of repairs to the well.

When he first came to it the well was full of holes because it had been shot to pieces by hunters. He repaired them all with nuts and bolts.

He also has repaired the half-inch drip tubing that connects the well with the source. The tubing is drip hose and there is about 500 feet of it that travels up the wash (gravity fed to an underground tank).

“Winters with heavy rains usually wash away the hose,” he said. “One winter I found all 500 feet of it downstream and had to replace the whole line.”

He said one thing that saves him money is that people have donated the tubing to him.

Besides the winter rains, Senior said coyotes also bite the lines and tear them up and there is the occasional vandalism.

The PVT accompanied Dick Senior as he rode his ATV up the mountain for his last visit to Wheeler Well. After the interview, we left him up there with Crouch to enjoy the wildlife one last time.