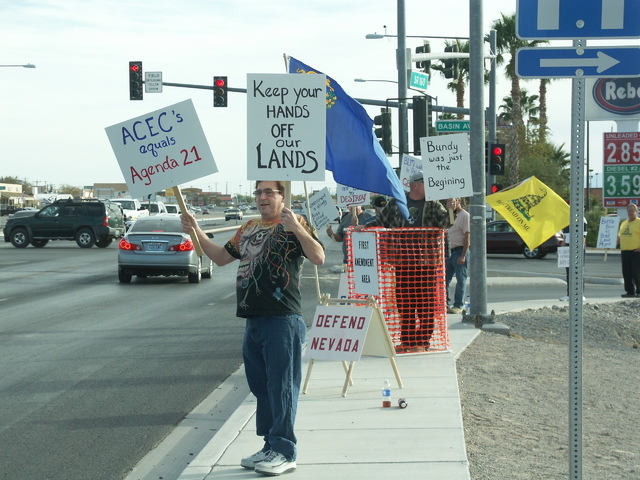 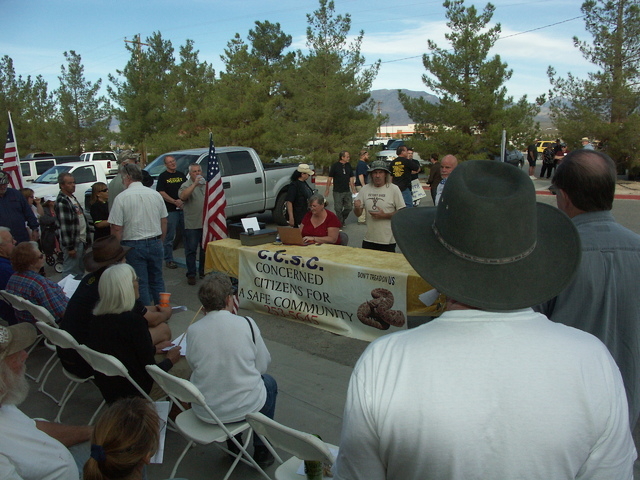 About 100 anti-BLM protesters converged in one of the largest local protests in recent years at the corner of Highway 160 and Basin Avenue to wave signs, fill out comment sheets provided by the Concerned Citizens for a Safe Community in front of the community center, or in general just complain about federal restrictions.

The Bureau said in a late Wednesday statement it postponed the Pahrump meeting to find a larger venue. Bureau spokesman Rudy Evenson said Thursday evening a decision hasn’t been made yet when and where to reschedule the Pahrump meeting.

The meeting was to be the last of five public meetings on the environmental impact statement for the resource management plan.

The preferred alternative in the plan has been criticized by Nye County officials for proposing 20 new Areas of Critical Environmental Concern and limiting development in areas for visual resource management.

Protest organizer Lisa Marie Johnson, who traveled to Bunkerville to protest the BLM seizure of rancher Cliven Bundy’s cattle last summer, sent an email to protesters saying postponing the hearing would leave them more time to organize. She said Nye County Commissioners are planning their own meeting on the resource management plan in mid-December.

Johnson said she’s had calls from around the state, from people in places like Lyon County, wanting to know how they can participate.

“It gives us more time to organize and then of course we knew a lot of people were going to come here today before they ever realized it was canceled so we had to be here and it was a good opportunity to inform them of what was really important today,” Johnson said. “You can come out with your signs and voice your opinion but unless you fill out that comment form and actually reference the particulars in the management plan that you’re talking about, your comment actually is not publicly recorded. So the comment form is really key to all of this.

“I think the BLM is a bureaucratic agency that has gotten way out of control and thinks they are our keepers when they have forgotten they are just our gardener. I think it will probably end up in the courts if the state Legislature does not kick them out of the state first.”

“This is our community and they need to know,” Bent said. “The only reason they bailed out is because they realize the people are aware of what they’re about to do.”

Bent said once an Area of Critical Environmental Concern is designated, the government keeps coming back with more restrictions. On the energy side he said the fluid minerals management plan gives the BLM the green light to allow fracking for oil up north.

“They know exactly they’re not in control so they pulled the plug. What they can’t take is the light of day of public scrutiny,” Bent said. “Everybody got wind last night about the one in Vegas and they showed up.”

He said during the environmental impact statement meetings, “the BLM controls the conversation, they control the outcome. They give you a couple options to choose from, none of which are good.”

“The study they’re using 2,255 pages. The comment forms they want you to spell out the specific page and the thing you’re picking out in their report,” Bent said to protesters.

Sheriff-elect Sharon Wehrly was in attendance, she thought the BLM noticed the big turnout in Las Vegas Wednesday night and got nervous about the Pahrump hearing.

“They’re supposed to maintain it not take it away. It’s our land,” she said. “I used to be president of the Nye County Goldseekers and we got claims up there.”

Houses in the Johnnie area are fed by Grapevine Springs, which is proposed for an ACEC, Ager said.

“We’re going to voice our opinion whether they like it or not. They still got two months to do damage,” said Dave Lass, waving a “Don’t Tread on Me” flag.

“I think that we the people need to speak our mind and try to change this back to where these decisions are made with congressional oversight and the state Legislature. We don’t have any say. This was done at the federal level and they push it upon us,” Lass said.

He said there were reports from the public meeting in Las Vegas Wednesday people weren’t allowed to speak, there were only presentations. The BLM holds meetings in an open house format. Evenson said a stenographer is available to take oral comments for the record.

Mark Stewart held a sign asking for “no ACECs”.

“The ACECs are nothing but land closures and they’re supposed to be public land. I’m a lifelong Nevadan of 49 years and I’ve been watching my hunting grounds get closed down, access to them. In the old days they used to maintain these roads and keep them up and plant juniper for game and now their goal the way I see it is to make these roads go away so you can’t use them,” he said.

Stewart said he contacted the governor’s office but was sent an e-mail by a constituent representative saying it was a federal matter and they wouldn’t intervene on public lands issues.

Terry Lass printed a bunch of signs that read things like “Government is already Area of Critical Economic Concern,” “Bundy was just the beginning” or “this land is our land to love and enjoy not BLM’s to destroy.”

Former Nevada District 36 Assemblyman Ed Goedhart said out of 25,000 acres slated for disposal by the BLM in Amargosa Valley there was only one transfer of land to private hands in the last third of a century. The plan proposes offering 16 sites totaling 42,513 acres of public land in the Pahrump Field Office for disposal. The plan proposes a 9,642- acre Area of Critical Environmental Concern in Amargosa Valley surrounding Ash Meadows National Wildlife Refuge.

Goedhart said he got support from the Amargosa Valley Town Board and Nye County Commission to purchase 40 adjacent acres of public land bounded on two sides by property he owns that were slated for disposal in the 1998 BLM resource management plan. Goedhart said he was told he’d have to pay $40,000 for BLM staff time to review the application and pay fair market value for the property. He agreed to the terms. But after the re-election of U.S. Sen. Harry Reid, D-Nev. in 2010, Goedhart said the BLM told him they didn’t have the money to process the application.

“Here we are today we find out they had too many willing participants and now they decided to close down the hearing and schedule it hopefully for a later time when people are distracted with something else,” Goedhart said.

Jeff Wiest said he thought the Bureau would show up anyway because the meeting had been publicized.

“They backed down because they knew there was going to be a big protest,” Wiest said.

Some people carried signs linking the Bureau’s plans to Agenda 21, a treaty signed by the United States at a United Nations Conference on Environment and Development in Brazil in 1992, in which the U.S. and other countries pledged to adopt the voluntary resolution to combat poverty, pollution and conserve natural resources in the 21st century.

The plan has been criticized by the far-right conservatives and Libertarians as a ploy to erode American sovereignty and deny individuals property rights.