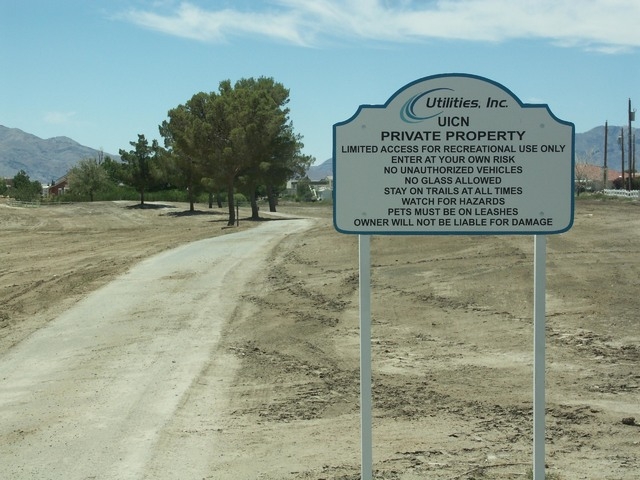 The land remediation effort at Discovery Park (formally Willow Creek Golf Course), is nearly complete as the second phase of the project is expected to get underway.

Crews are now performing some final clean-up work on the project, which included the removal of dead and diseased trees, applying weed abatements and dust palliatives at the site bordering Mt. Charleston Drive, Calvada Boulevard and Red Butte Street.

“I’m not exactly sure how long it would take to remediate the ponds but it’s not going to be long,” she said. “Right now we are preparing plans to submit to the county and after the approval period, I think they have 21 days till we get the documents back from them and get the go-ahead with the pond remediation process.”

Gilmore said crews will install new liners to replace the tattered, weather-beaten liners that have been there since the golf course was first developed.

Much planning went into the creating a concept for the site.

Gilmore said Utilities Inc., formed a stakeholders’ group to help determine which direction they wanted to move, for the benefit of the community.

The idea is to determine what will work and will not work at the park.

“Once all of the land and pond stabilizations are completed we do hope to incorporate a plan for an educational park,” she said. “It’s an ongoing process and we’ve had a couple of meetings with the public to get some ideas for things they would like to see at the park.”

Utilities Inc., officials are now working with a group of landscaping architects to develop a master plan.

Some ideas tossed about include a section for kite flying, a sculpture garden and even an outdoor theatre stage, but nothing has been finalized as of yet.

Gilmore also said she hopes to incorporate various local entities to partner with on the project.

“The Red Rock Audubon Society has taken an area of the park and they will help maintain it,” she said. “It’s similar to adopting a section of the park. Pahrump Valley Disposal has been helping with the mulching of the trees that have been taken down which will be used in future plantings.”

“It will be open to the public but we want to discourage the after-hours activities,” she said. “If we decide to have lighting it would be some solar variety but at this point we are not going to encourage anything after dusk at the park except in some common areas where we plan to have community events. Those areas would have lighting where it would be open to the public for evening-type events.”

Though much work is still required at the site, Gilmore said she’s already looking forward to holding an official ceremony sometime next month.

“We hope to have a groundbreaking ceremony and right now it’s tentatively scheduled for mid-July,” she said. “That’s the time line depending on when we get the plans back and when we can get started on the ponds.”

One resident who is grateful for the project is nine-year resident Joseph Mitchell, whose home sits adjacent to the site.

Mitchell, who moved to his home a little over a year ago said he got tired of looking at all of the dead trees and grasses directly behind his backyard.

“I wish they could restore the golf course but I know that’s not going to happen,” he said. “When it’s finished I think it’ll bring a little life to this neighborhood. I think it’s going to be a very pleasant change and hopefully bring the property values up.”

Gilmore, meanwhile, said there will be additional open meetings where residents can voice their input on the project, and hopefully express interest in becoming a partner on the overall project.

In the meantime, she said local residents can log on to their Facebook page to learn the latest updates on the project.