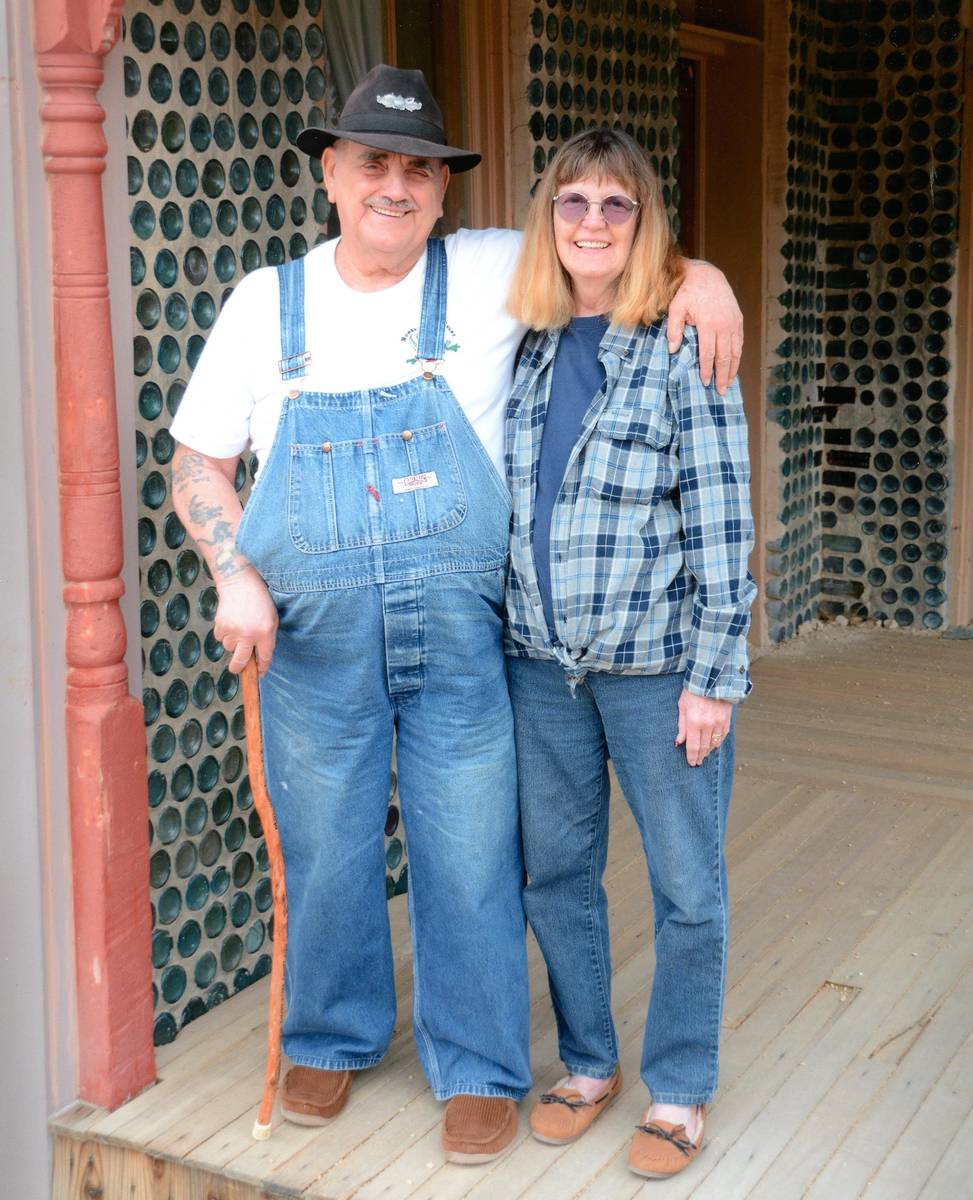 Richard Stephens/Special to the Pahrump Valley Times Evan and Molly Thompson pose for a photo at the Bottle House in 2015. 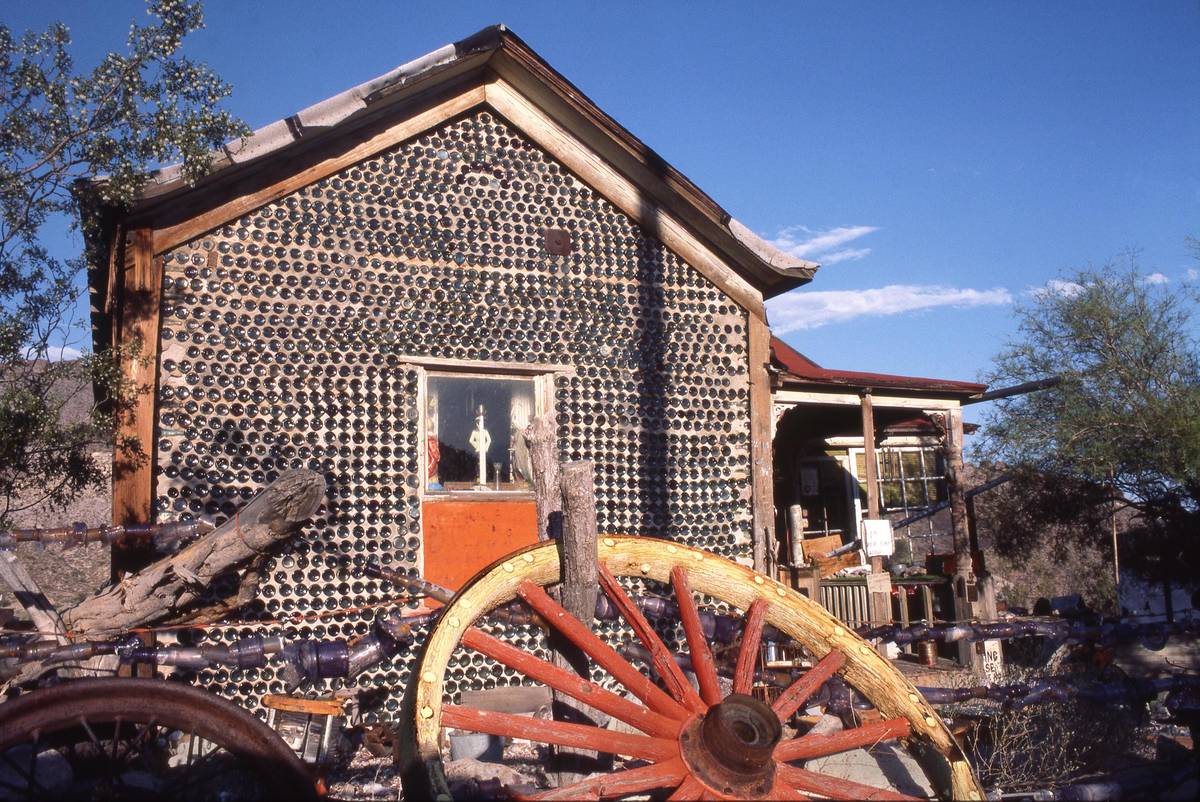 Richard Stephens/Special to the Pahrump Valley Times The Bottle House in Rhyolite as pictured in 1985. The location was being operated as a gift shop at that time.

Evan Thompson III, the last person to have actually lived in the Tom Kelly Bottle House in Rhyolite, passed away Oct. 2 at the age of 83. Most of the information in this article comes from an interview I conducted with him some five years ago.

Evan was raised by his grandparents, Tommy and Mary Thompson. They became his legal guardians after his parents divorced when he was 1 year old.

Before the family moved to Beatty, they moved around a lot. He said he was in 13 schools in eight years. The experience of being the “new boy” in school and having to stand up and introduce himself was something he said always made him uncomfortable.

Perhaps that was why he said he never liked to be on stage, even though the family made their living for years as entertainers.

He remembered being once introduced, at the age of twelve, by his grandfather as “the youngest magician in the world.” He worried, thinking, “What if there’s an 11-year old in the audience who says he can do the same tricks?” When he got on stage, he balked and walked off.

For a time, the family had a one-tent traveling carnival show. He said they had a sign that read “Free to Enter, a Nickel to Get Out.” They also toured with the Mills Brothers Three-Ring Circus and worked with the Kirkwood Carnival. One of Tommy’s most interesting circus gigs was playing the accordion as accompaniment for Big Bertha, the harmonica-playing elephant.

His aunt, Dorothea Benning, who also later lived in Beatty, was featured in their act as “the beautiful head without a body. When performing, she was in a glass case, and Evan says it was incredible that people actually believed the act.

Thompson had plenty of colorful tales about the family’s travels with the show, including times when they were so bad off financially that they had to stuff rolled up blankets in their vehicle’s tires to substitute for inflated inner tubes.

The family moved to Beatty in 1954 to get Mary Thompson, who had asthma and bad lungs after suffering “at least five” bouts with pneumonia, into a drier climate.

When they first got to Beatty, they lived in the one-room stone cabin on Montelius Beatty’s ranch. The ruin of that cabin still stands across the highway from the Stagecoach Hotel and Casino.

The Thompsons moved to Rhyolite when they were given the opportunity by the Beatty Improvement Association to act as caretakers of the Bottle House. “We just moved out there and started to take care of the place,” said Evan.

They had no running water and no electricity, and Tommy hauled water from town or from the Rhyolite Depot in buckets. Things improved in the 60’s when Valley Electric brought electricity to the ghost town.

For living quarters they managed to get a couple of small wooden buildings from the Nevada Test Site. Mary did her cooking in the back room of the Bottle House, which they kept blocked off from tourists, and it was in this room that Evan slept on a cot when he was 17.

He said it was very cold in the winter, and Mary would heat hand irons to put under the bed covers, along with hot water bottles, and he’d also sleep in his clothes and under heavy quilts, “not like the light ones they have today.”

He said the family lived mainly off Social Security, and odd jobs Tommy picked up, including playing accordion for events in Beatty establishments and at Stovepipe Wells in Death Valley. His grandmother sometimes washed dishes at the Exchange Club in Beatty. They also sold a few little little items, like “rocks and purple bottles they dug up” to tourists. Tommy even painted burro droppings with gold paint, mounted them on plaques and sold them.

When Evan was a junior in high school, “I got mad and quit school on May 7th and joined the Navy the next day, and ten days later I was gone.” He served four years on a destroyer, the USS Wadderburn.

Returning to Beatty, he worked “for the state,” then at the 76 gas station. He then worked two years as a miner at the Crowell fluorspar mine, and two more at the Vanderbilt kaolin mine. This gave him the required four years of experience that landed him a job as a miner on the Nevada Test Site, where he worked for seven and a half years.

Late in the 60’s he began to help at the Bottle House, and moved there after grandmother Mary died in 1971. That is where he met his first wife, Kathy.

Evan and Kathy got a catalog for wholesale trinkets and expanded the gift shop operation at the Bottle House. People could also pay to tour through the inside of the house, which now was decorated with various items, including at least one from Tommy’s carnival days—a paper mache skeleton in a coffin that Tommy had concocted some “historical” tale about.

“Oh, he told stories,” said Evan, “and Heisler up on the hill was just as bad.”

Frederica Heisler and her husband, the Reverend Herschel Heisler, operated the Rhyolite Depot as a tourist attraction. She was the creator of “Mona Belle’s Grave,” the fake burial spot of an actual Rhyolite murder victim.

Evan told how a woman once asked Mrs. Heisler if there were any snakes in the area.

“Oh, my,” he said she replied, “There was a snake here the other day as long as the depot.”

Evan said that Mr. Heisler just tapped her on the shoulder and said, “Baby, I don’t think it was quite that long.”

“She always dressed like a bag lady,” he said, and looked as though she hadn’t had anything to eat, “but they had good money.” He said passengers from tour buses would give her groceries.

Besides running the Bottle House gift shop, Evan and Kathy supplemented their income in various ways, including a cleaning business and garbage hauling.

Evan said he started the garbage business in 1974 because there was talk during the oil crisis of instituting gas rationing. He remembered that during the rationing of World War II, people with businesses requiring a truck got extra gas rations, and he reasoned they needed more gas than most people because of their remote location.

He started hauling garbage with a pickup truck, graduating to a larger flat-bed truck, to a small compactor, to a larger compactor before selling the business.

A lot of interesting people visited the Bottle House when Evan was operating it, including a number of celebrities. Two that stuck out in his memory were Mariette Hartley and Marlon Brando.

The first time Hartley visited, Evan said she wanted to see Death Valley, and her kids wanted to play with his kids. So she left her kids with his family for part of the day.

He told the kids, “Let’s play a trick on your mother. When she comes back, everyone ignore her.” So when she returned, everyone acted as though she wasn’t even there.

When she was “nearly in tears,” everyone went over to her and explained, to which she replied, “You really know how to bring a person down,” (as down from being the movie star). He said she was about the sweetest woman he ever met.

Evan, who did beautiful woodwork, made a console for Hartley’s Volkswagen Vanagon and also an oak table like the one he made for the children’s area in the Beatty Library. He said that when Hartley and her husband came back a couple of months later to pick up the table, they said they needed to take a painting that cost $35,000 out of the van before loading the table.

“I didn’t want to touch the thing!” said Evan.

When Brando visited the Bottle House, Evan said he showed up in an ordinary station wagon that would be considered a “grandparent” car today.

“He had three starlets with him, and they went up to the depot and around,” while Brando stayed behind and visited with Evan for about a half hour, asking questions about the Bottle House and Rhyolite.

He said that Brando was a nice guy, nothing like the tough guy roles he played in the movies.

The family lived for years in the old mercantile building, which had been relocated near the Bottle House. They still had no running water. (This building was struck by lightning and burned to the ground on Sept. 20, 2014).

Evan painted an American flag on the awning over the porch of the mercantile building, and whenever military aircraft flew over, he would hurry outside and wave a flag at the pilots.

The pilots came to call him “The Real American,” and showered him with gifts of autographed photos and paraphernalia. He and his wife were hosted as VIP guests at firepower demonstrations at Indian Springs and at a graduation ceremony for Top Gun.

All sorts of military craft participated in the flyovers. “We even had a helicopter land in the yard,” he said. When the A10’s came, he said they always came in threes, and he was told that the third pilot was the rookie and always said the same thing.

In the 1980’s Evan moved north of Beatty on Pioneer Road, and the military flyovers continued at his new residence. His second wife, Martha “Molly” Bailey (Kathy and son Ethan were killed by a drunk driver in 1997) said that, even though Evan’s hearing was failing, he was always the first to hear approaching aircraft.

A service will be held on November 7 at 2:00 p.m. in the Beatty Community Center with Evan’s son, Elan, officiating.