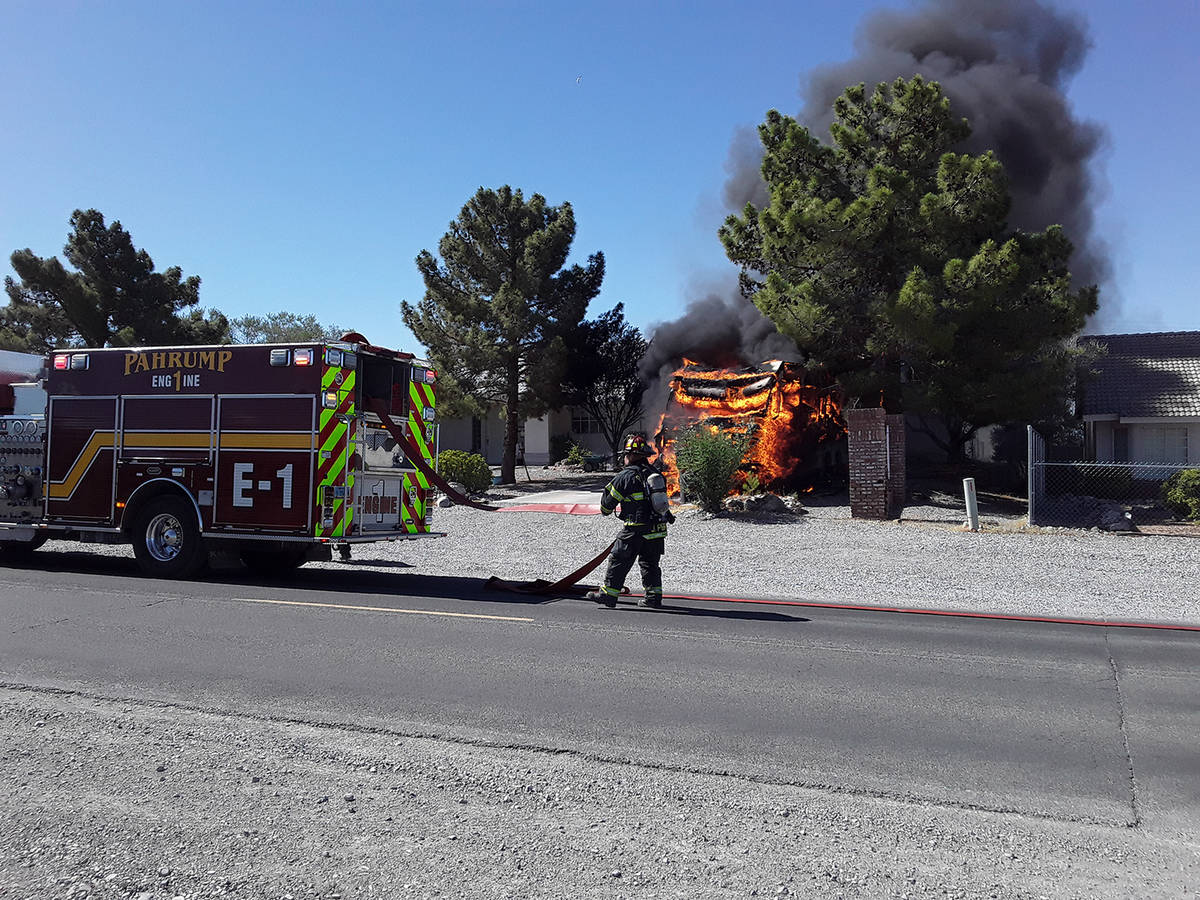 Selwyn Harris/Pahrump Valley Times A motorhome was destroyed during a fire on the 3400 block of East Winery Road just after 9 a.m. on Monday, June 8th. Neighboring homes were briefly evacuated as fire crews quickly extinguished the blaze. The exact cause of the fire is under investigation.

Pahrump Valley Fire and Rescue crews, along with Nye County Sheriff’s Office deputies, responded to a motorhome fire along the 3400 block of Winery Road just after 9:15 a.m. on June 8th.

Pahrump Valley Fire and Rescue Services Chief Scott Lewis said the vehicle was parked in the driveway of the stick-built home when the fire occurred.

“Crews arrived on location to find a well-involved motorhome that was directly up against the one-story single-family dwelling,” he said. “There were windy conditions and the winds were pushing the fire directly into the structure.”

Unlike some recent fires in the valley, Lewis said crews were fortunate to have a fire hydrant available near the scene.

“The crews laid in a supply line and had plenty of water, where they never had to leave the scene to go refill,” he said. “They quickly extinguished the fire with minimal damage to the primary dwelling. Prior to our arrival, the fire broke out two windows and started getting into the attic space and the occupied living space in a bedroom, but crews were able to get additional lines and knocked it down.”

Additionally, Lewis noted that residents living in homes near the fire were evacuated due to the extent of the fire conditions within the motorhome, which had venting propane.

“It was completely involved in fire, but the hydrants allowed us to get the necessary water quantity and pressure that we needed from the moment we arrived, so there was no cessation, and we went right into suppression. There were also mature conifer trees that were well-involved in torching, which added to the dynamics of the incident. There were no injuries and the fire was under control in less than 10 minutes.”