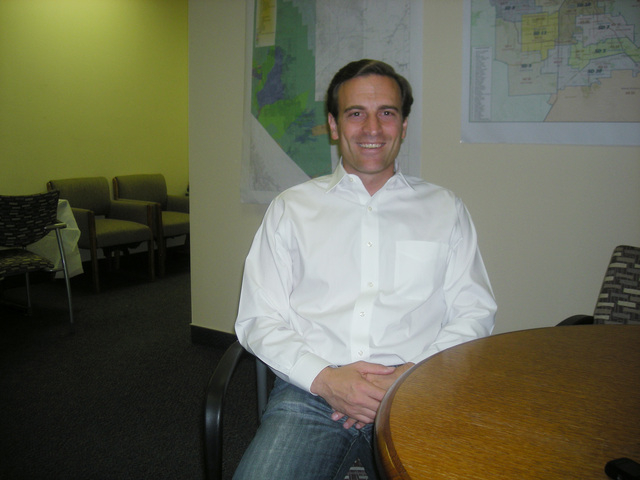 For Republican Nevada attorney general candidate Adam Laxalt, there’s more to his campaign than his last name — as a grandson of Paul Laxalt, the famous former U.S. senator and governor — he pledges if elected to be more active in standing up to the federal government.

“Something that this current attorney general has not had as a priority is to make sure that the state attorney general in Nevada is standing up against the federal government. There are many examples around the country where state attorney generals are suing the Obama administration and suing in particular federal agencies and challenging in many cases their view that they have unlimited power, challenging how far they’re willing to go to regulate our state and I think that is an imperative role for the attorney general’s office,” Laxalt said. He was in town after a visit with a conservative men’s breakfast group at Assemblyman James Oscarson’s office Friday morning.

“We need an attorney general that is willing to stand up for Nevada, Nevada businesses and Nevada individuals as many rights are being trampled by basically unlimited federal government,” he said.

Laxalt said he has the endorsement of the governor who wants him to be a partner. He said they have a similar vision of things they need to fight for to get businesses the freedom they need to grow. He asked a reporter to question his opponent about his support of Obamacare, which he called a regulatory nightmare that hinders businesses from hiring people.

Laxalt preferred to divert his criticism toward his opponent, Democrat Ross Miller, another famous name, the son of former Gov. Bob Miller, rather than the incumbent attorney general Catherine Cortez-Masto who is term limited. Miller is term limited after three terms as Nevada secretary of state. For example, Laxalt applauded the current secretary of state’s fight against human trafficking.

“Nevada has a huge human trafficking problem, in fact we’re one of the worst, we have one of the highest per capita rates in the country,” Laxalt said. It is an issue that requires cooperation between different levels of law enforcement, from federal to local levels, he said. “Human trafficking would be a big priority for me.”

Laxalt listed as his main priorities as top cop for the state making sure local law enforcement and district attorneys have the resources they need; to be in tune to local issues for any systemic problems that may need his platform as AG or new legislation; and dealing with the problem of heroin and prescription drugs.

“Things like prescription drugs and heroin really ruin communities and families and a lot of times they start at the teen level. You’ve got teenagers hooked on heroin and it’s hard for the family to be a full functioning member of the community,” Laxalt said.

Laxalt said he has the support of all but two sheriffs in Nevada.

Laxalt made a statement last week he won’t accept gifts, like $4,000 ringside seats from corporations, a stand the Miller campaign dismissed as a campaign gimmick.

“These are things I will not accept as an attorney general because I need to stay above the law and make sure that there’s no appearance of a conflict of interest and my opponent has taken 70-plus thousand dollars in gifts. It’s something I believe that the Nevada voters would be shocked to know that there’s elected officials taking that volume in gifts in such a short period of time,” he said.

Medical marijuana is in the news, as a crop of applicants travels to Carson City to seek state licenses next month. Laxalt said he will have to see how the situation plays out, with the state legalizing it, while federal law bans possession of marijuana.

“What the Obama administration has done with many areas and our nation’s drug laws are no different. By ignoring Congress and sending mixed signals about what they’re going to enforce and what they’re not going to enforce they leave the states and businesses in the state not knowing what they can do and I think medical marijuana is a perfect example,” Laxalt said.

On public lands, Laxalt said there’s a growing consensus among attorneys general in western states they need to regain public land, like a state task force commissioned at the last state legislative session. As a former naval officer, Laxalt said he’ll look for solutions already out there and not reinvent the wheel, like following Utah’s lead on that issue.

“Another good idea along those lines is the sage grouse. We have a delegation right now that is pretty united that we need to fight against this designation of the sage grouse, since it will take over huge sectors of our economy and as attorney general I want to work to file some lawsuits and challenge the authority to designate the sage grouse as a protected species,” he said.

Laxalt added, “I think it’s very important to have an attorney general who fights for the Second Amendment.”

Laxalt received his law degree from Georgetown University, he is an attorney with the Lewis Rothgerber Roca law firm. He was a judge advocate general in the U.S. Navy, what he calls basically a mini-attorney general, who volunteered and served in Iraq with a military police brigade dealing with detainees.

“I had to work with senior Iraqi officials, so there’s an international law component as well as just a law enforcement component. That experience was 18 hours a day, seven days a week and it was lifetime of experience jammed into a tour of less than a year that you really had to think on your feet and deal with a lot of issues that no one’s thought of before,” he said.