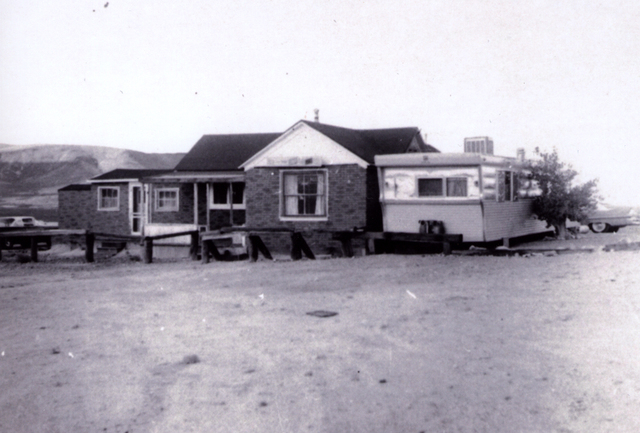 Nevada Rose was born in the early 1950s and grew up in northern Nevada.

She got her first job at a Nevada brothel when she was in her early twenties and worked for about 10 years, from the 1970s into the 1980s. Among the brothels she worked in was Bobbie Duncan’s Buckeye Bar in Tonopah.

I interviewed her in the summer of 2014.

In recent years, Nevada Rose worked as a shift manager at a brothel in northern Nevada.

A shift manager manages the brothel for a set number of hours every day. Typically, shift managers are found in large brothels as opposed to small ones, where the owner usually lives on site and manages the operation. When on duty, the shift manager counsels the women working there as needed, handles business matters as they arise, and collects the money from patrons.

Brothels prefer women as shift managers who know the basics of brothel operation and are a little older than the girls, with a more authoritative bearing. Such women are thought to be less likely to compete in customers’ minds with those women offering their services.

In about 1980, a friend called Nevada Rose and indicated they were short of girls at Bobbie Duncan’s Buckeye Bar in Tonopah. Being familiar with its good reputation, she took a job there.

Nevada Rose described the Buckeye and its operation at that time, saying that a family atmosphere prevailed there. Unlike some brothels, they were not open 24 hours a day. They typically closed about 4 a.m. and if a customer wanted to come in after that hour, he had to make arrangements ahead of time.

One of the things Nevada Rose remembered about the Buckeye was its fancy bar. It gave the place a kind of old Western feel. Off the bar were four or five rooms for the girls, with a big lounge area with a fireplace where the girls could play cards and socialize among themselves.

The customers were not allowed in the lounge. Bobbie Duncan’s private quarters were located behind the lounge. Most of the time Nevada Rose was at the Buckeye, there were three girls working there.

Bobbie Duncan had suffered from diabetes, and by the time Nevada Rose was there, her diabetes had worsened. She had to use a walker to get around.

Nevada Rose recalled that at one point when she worked at the Buckeye, it would have been in June, a helicopter flew over and hovered above the parking lot just in front of the front door. Over a loudspeaker, the helicopter played “Happy Birthday” for Duncan. At that time, military personnel frequented the brothel but the girls were cautioned not to talk about it. There was a sign in the brothel, not readily visible to the customers, cautioning it would be treason if the girls talked about military personnel visits.

It is Nevada Rose’s belief that one thing a working girl should never do is reveal her real name to anyone, including the women she’s working with.

Nevada Rose was her working name and very much represented a separate persona from her real self.

“Nevada Rose was a working girl who got good at her craft,” she said. “When I talked to customers, I never told them about my personal life, ever. Everything I did was a manufactured person, kind of like acting. And when I wasn’t working, then I was myself.”

Thus, there was a sense in which the woman known as Nevada Rose had a dual existence—that of an actress playing a role and another, her real self. Having worked some in the theater, she believes this is true for many actors.

Once a customer chooses a girl, the two of them walk back to her room and discuss what kind of a party he wants and how much he is willing to pay.

“Each girl has her own style and what she does depends on the customer,” Nevada Rose said.

After a while, a girl learns “that the game is more psychological than anything else … What you want to do is more or less get into the customer’s head.” Most customers, she said, “are very, very, very hesitant to tell you exactly what they want.”

From the moment a guy picks a girl out of the lineup, she’s trying to determine what he might want, how fast she can complete the negotiations, and how much money she can get for what he wants. In her own mind, she’s not thinking about sex itself at that time.

“Basically I would be trying very, very hard in a very short period of time to figure him out,” she said. “Trying to see what I could best do for him that would elicit the most money.”

When asked what pleasure she got out of the whole process, including the sex, Nevada Rose answered, “Going to the bank.” As far as getting turned on by the sex, she said, “You can’t say that you never get turned on or anything, because it happens.” But not very often; a few times a year, she said.

“Sometimes you meet somebody that has a kind of special personality or something,” she said. “I never really could figure out exactly where it tips over.”

Some customers are known as PTs, or professional tricks. They frequent brothels and can tell a girl pretty much exactly what they want. Often, customers go to brothels because they have a special party in mind. But with a run-of-the-mill customer, “It’s a game of psychology—trying to find out what he’s comfortable with, what he’s wanting, what kind of a person he wants to be around. So you mold yourself; you become that person.”

Nevada Rose remembered a regular customer she had at one brothel. He was an older gentleman who had a colostomy bag. A lot of the girls didn’t want to deal with him because they thought it was odd. Nevada Rose said she liked it because he was very clean; everything was going into the colostomy bag. This man had lost his wife and was very lonely. He was willing to pay for the time, yes, to have sex, but not just sex.

“He wanted to have an encounter, somebody to talk to, somebody that was nice to him,” she said.

He came to see her twice a week and she was always glad to see him. It made her feel good that she was making him “feel like a man.”

Nevada Rose said that with her, acting was a part of the experience for the customer.

After 10 years, she burned out. During the last four years of her career as a prostitute, she worked part-time and put herself through college, bought herself a car, and other items.

She’d come back to the brothel whenever she could during that time.