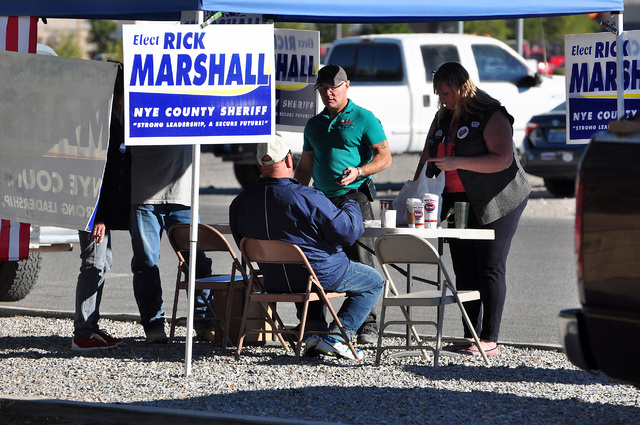 The hotly-contested Nye County sheriff’s race generated $118,336 in spending from the start of the year through the latest reporting period which ended Friday, with Assistant Sheriff Rick Marshall outspending his opponent Sharon Wehrly $68,259.47 to $50,077.06.

During the fourth reporting period, which covers only 17 days from Oct. 14 through Oct. 31, Marshall reported raising another $4,201 in monetary contributions and $7,549 of in-kind contributions. He spent another $14,840 in that period.

Marshall donated another $2,301 to his own campaign in the latest reporting period, he has spent $27,052 of his own money in his run for sheriff as of Friday. Other recent contributors include Gary Johnson of Camarillo, Calif., with a $750 contribution and First Leasing Inc.,which lists Las Vegas car dealer and rural Nevada hotel owner Jim Marsh as president, gave $500.

Armscor Precision International No. 1, a Pahrump company manufacturing ammunition which has embarked on an expansion project, donated $500 to both sheriff’s candidates.

Marshall has accumulated $64,161 in total contributions to this campaign as of Friday, but that includes his own $27,052 contributions. Wehrly lists $23,186 in total donations as of Oct. 31.

Schinhofen’s opponent, Independent American Party candidate Rick Osborne, reported another $1,724 in contributions, bringing his total to $6,626 for the campaign, and another $599 in expenses, for $4,023 in total expenditures. Osborne received $525 from Pahrump Justice of the Peace Ron Kent, $500 from Saitta Trudeau car dealership and $500 from Creekside Investment in the latest report.

The final candidate in the District 5 race, Democrat Bob Howard, didn’t list any donations or expenses.

District Attorney Brian Kunzi reported a $250 contribution from former County Commissioner and Assistant County Manager Joni Eastley in his latest report, that brings his total contributions to $41,742. He spent $5,331 on his campaign in the latest reporting period, bringing his total expenditures to $39,152.

Kunzi’s opponent, Angela Bello, also received a $500 contribution from Armscor Precision International, she added $623 to her campaign in the latest reporting period, bringing her total donations to $24,015. She spent $1,141 over the 17-day reporting period, with a total of $15,340 spent on the campaign.

Fifth District Judge Robert Lane reporting receiving another $750 in the latest reporting period, $500 of it came from Nye County Chief Prosecutor Kirk Vitto. He lists $17,315 in donations since the start of the campaign. Lane spent another $1,052, bringing his total expenses up to $24,726.

Lane’s challenger, Lillian “Lil” Donohue, didn’t report any more contributions or expenses in the latest report, her total donations add up to $9,485, her total expenses $8,823.

Nye County Clerk Sam Merlino didn’t report any additional contributions this reporting period, she received $2,920 so far in the campaign. She spent another $1,212 in the latest report, adding up to $9,294 in expenditures.

Merlino’s opponent, Sheila Winn, didn’t receive any more contributions either, she reported raising only $126.14 in the campaign through Friday. Winn reported spending another $100 in the latest report, raising her total expenses to $5,516.

Nye County Assessor Shirley Matson received a $500 contribution from Red Rock Leasing Inc., her only listed donation of the entire campaign. She spent another $1,000 in the latest reporting period, bringing her expenses up to $3,500 for the campaign.

Deputy Public Administrator Robin Dorand-Rudolf didn’t report any donations or expenses this period. She lists $2,061 in contributions for the entire campaign through Friday and only $811.70 in expenses.

Her opponent, Bob Pilkington, listed a $210 donation to his campaign in the latest reporting period, his only donation and expense of the campaign.

Nevada District 36 Assemblyman James Oscarson, R-Pahrump, who is unopposed, reported no additional contributions, bringing his campaign war chest up to $49,394 in donations. He spent $93,85 in the last 17 days, bringing his total expenses up to $41,159.