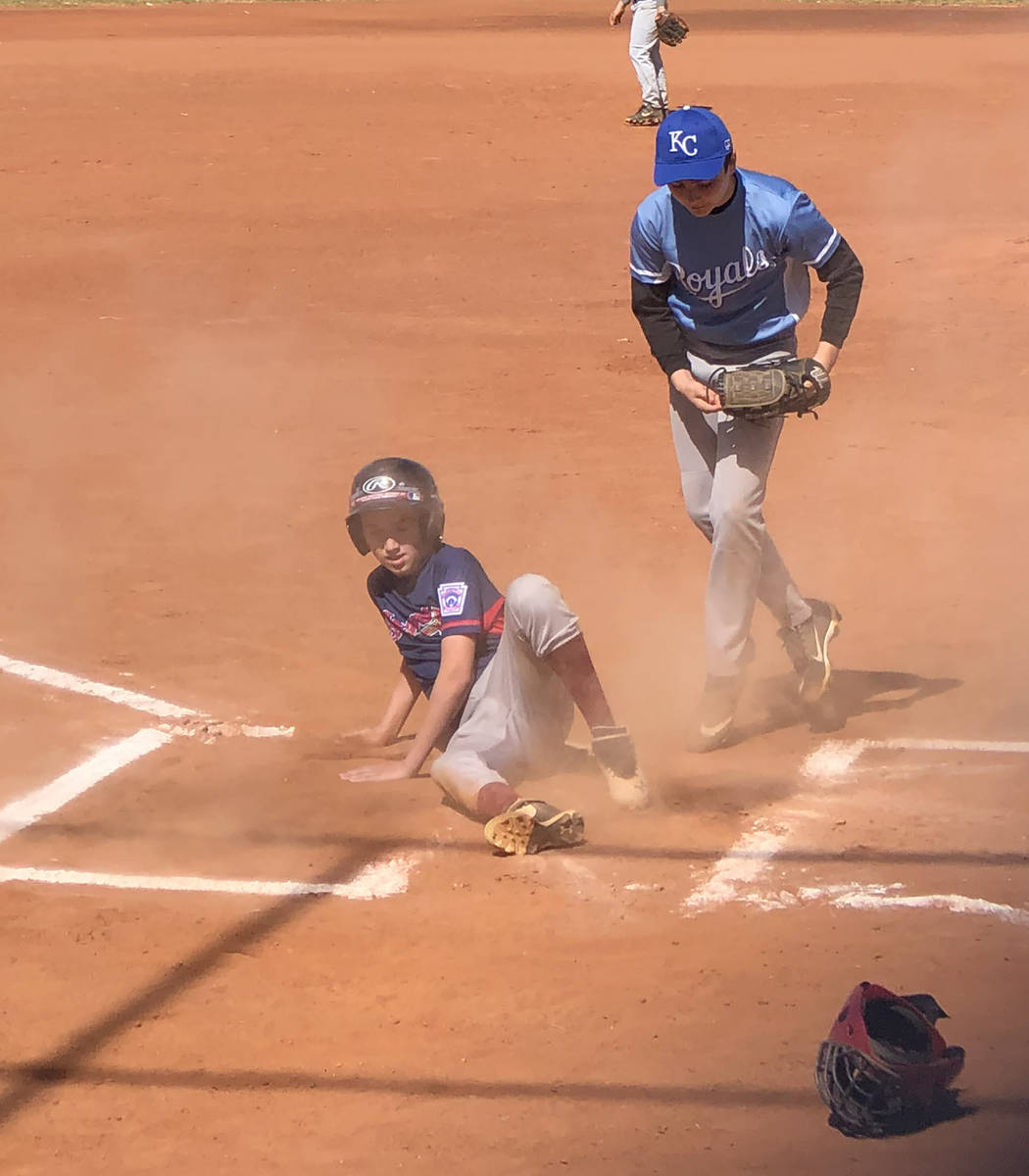 So one would naturally expect that if anything was going to force PVLL off of its own fields that league officials would be in on the plans.

So imagine Mark Broedling’s surprise when the league’s umpire-in-chief learned of plans to push a few hundred kids off of their baseball fields on the morning of the Nye County Commission’s meeting to approve those very plans.

“That’s our biggest complaint, the communication,” Broedling said three days after the Commission voted 5-0 to move the Pahrump Valley Balloon Festival from its traditional location at Petrack Park to Ian Deutch and scheduled it for April 29-May 2. “There’s been zero, and there’s still been zero after the meeting.”

Broedling said there are multiple issues at play, from the costs of this to PVLL to how much time the Chamber of Commerce will need to set up for the balloon festival to parking to what condition the fields will be in after the festival is over. And, according to Broedling, none of that was discussed with PVLL before the vote.

“The thing driving me the most nuts is it’s the Pahrump Valley Chamber of Commerce pushing the agenda item and not communicating,” he said. “Last I checked, a chamber of commerce is supposed to be a community organization. I found out hours before the meeting by having breakfast with someone who knew that this was even on the agenda.”

The first issue was moving the festival to Ian Deutch. According to Jenney Sartin, CEO of the PV Chamber of Commerce, COVID-19 restrictions made that necessary.

“The reason we moved the field is because of the state criteria in order to meet the requirements that are set by the state in order to get our large gathering plan approved,” Sartin said at the meeting. “We have to be able to be inside a fenced facility so that we can monitor the number of people coming in.”

Coincidentally, a fence is part of the commission’s solution, as a temporary fence will be put up at Petrack Park for PVLL games with the county’s assistance through COVID-19 funds. This was news to PVLL officials, although Sartin suggested there was discussion about it somewhere.

“It was not a random decision,” she said before the vote. “This is something that’s been in the works for months.”

Perhaps, but during those months PVLL was kept in the dark about being exiled from its own fields.

“We were given the field at a meeting in early February,” Broedling said. “We got our official calendar Feb. 24, and that had everything in the park on it. There’s one little line item that says all reservations are subject to cancellation for special events. That’s the only place that’s ever been talked about.”

Sartin acknowledged that the size of the balloon festival required a plan submitted to the state 30 days before the event. Broedling is astonished that a plan had to be submitted before any information was provided to the PVLL.

“We got our official email from the town about this event on Monday, April 5 at 2:17 p.m.,” Broedling said. And to him, timing is if not everything, a major problem he has with the entire procedure.

“And the part that drives me crazy about this is, at the same time they were talking with the state was the same item we were working on our opening day ceremonies for March 20 at that same park,” he said. “The information I was asking for to submit my COVID plans I couldn’t easily get from the county. Obviously, they gave them the information at the C of C quite easily.”

“Decent-sized” in this case, Broedling said, was 260 children, 780 people if two parents per kid came to opening day. He said that with 154 spaces around the park, double-parking is necessary on game days. That brings up another issue.

“On a piece of paper I received from Nye County, I’ve got a 100-person max per playing field,” he said, noting there are four full-sized Little League fields at Ian Deutch. “When March 15 came we were permitted to go up to 250 occupancy, which is why we were able to do our opening day ceremony.

“From their plan, they’re expecting 3,000 people at one time, which is what they told the state of Nevada. There is not parking for that in that area. They are going to be encouraging people to park on private land.”

But issues will arise even before the balloon festival is scheduled to begin.

“The Chamber of Commerce gets the field Thursday, and the event starts at 4 p.m. that day,” Broedling said. “There’s not really much set-up time, unless they’re planning to bully us out for more days, which they did not disclose in the public record. According to the permit from the state, they say they’re moving in on Monday. The paperwork that they gave the state says their set-up days are the 26th, 27th, 28th and 29th, with the event starting the 29th.

“If that happens, the cancellation of games could make the children ineligible to play in all-stars. The long-term goal for all-stars is eventually the Little League World Series.”

PVLL plays games every day but Friday and Sunday, Broedling said. “Between games and practices, we’re on all eight of the fields.

“Our biggest impact is going to be on our littlest kids, the T-ball and rookie divisions, because the only fields in the county for them to play on that they know of are at Ian Deutch Park,” he added. “There are more than 100 kids in those divisions.”

Then there is the bottom line. Unlike some Little League organizations, PVLL did not charge players who had registered for the 2020 season, which was not played because of the pandemic. The concession stand at Ian Deutch is an important revenue generator for the league, and losing several days of games would hurt financially. And moving everything to keep that revenue flowing will be a major cost.

“No matter what, Pahrump Valley Little League is going to be out quite a bit of money,” Broedling said. “The rough estimate is $5,000 to $20,000 to move to another park, and that’s everything from concession stands, time and labor, certifying the field. The county probably does not realize the financial burden to the league from moving us. Anywhere we go it’s going to cost the league money.”

But all of that could have been figured out in advance, Broedling said, if PVLL was involved from the start of planning for the balloon festival.

“Looking at the paperwork, they’ve known about this for over 30 days, probably closer to 60 days, and we got hours of notice (before the vote),” he said. “It’s all still developing, even today. If I didn’t have any investigative skills, half of this we still wouldn’t know.”

The conversation about the impact of the decision on youth baseball carried over to the Chamber of Commerce’s Facebook page, where Broedling said one of his comments was deleted within 30 minutes. But not deleted was a comment by Deanna Flores, PVLL’s sponsorship and fundraising manager.

“This really makes me sad for our kids of our Pahrump Little League baseball, especially right before their playoffs, that they play on those fields and already had games and practices scheduled that weekend,” Flores posted. “Communication should have been key in the decision-making process. I do hope the best for the event, (it’s) just saddening.”

The Chamber responded to Flores with the rationale for the decision, noting that even with a temporary fence Petrack Park does not meet the criteria for an event the size of the balloon festival under pandemic restrictions and that the festival already had been postponed. While noting the positive economic impact of the balloon festival, the response also pointed out something else.

“This shines a light on a clear need,” the response read. “We need the fairgrounds, and we need fenced parks with adequate parking.”

Flores responded by agreeing the event was good for the community and that she looks forward to it every year. But, like Broedling, she also reminded the Chamber of the real issue.

“Communication should have been key in the whole process, not until word of mouth went around the town and not three weeks before the event,” she posted. “But again, I do hope the best for this event.”