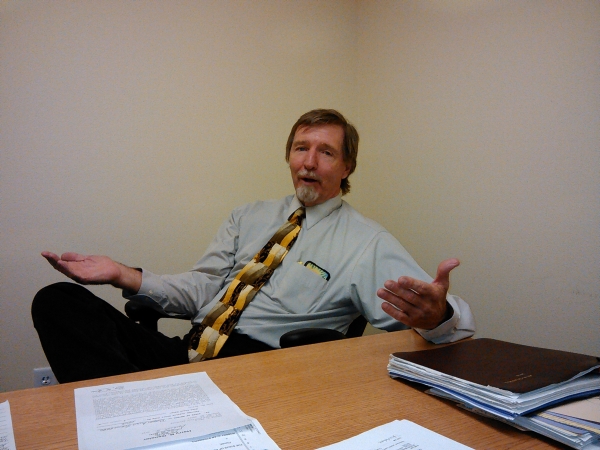 Local attorney Harry Gensler calls it one of the craziest court cases he’s ever seen in his 30-plus years practicing law, and it all originated on April Fool’s Day last year.

The case involves a local man arrested on domestic battery charges and what occurred after Nye County Sheriff’s deputies arrived at his residence to investigate.

Gensler said his client, David Turner, was living with a woman at the time but the relationship had turned sour and Turner was trying to get the woman out of his home.

“He said it wasn’t even a dating relationship but he was helping her out and she was staying at his place and overextended her welcome,” Gensler said. “She called the police and started accusing him of things and the Sheriff’s deputies came in and arrested him.”

During the domestic battery investigation, more than one of Turner’s pit bull dogs got loose and subsequently killed two dogs belonging to a neighbor.

Gensler noted that’s where the case turned bizarre in relation to his client’s arrest.

Gensler said when police arrived at the home to investigate the domestic battery allegations, they left the property’s gate unsecured, thus freeing the pit bulls.

“My client has double gates and double fencing on his property and he was in his house while the dogs were secured behind the fence,” Gensler said. “The police came to see him about a domestic battery and arrested him for domestic battery, but it turns out that it was the police who let the dogs out. That was my client’s defense.”

Gensler said because he thought the case involving the dog attack was pretty straightforward especially with all the facts presented, he and his client agreed with the testimony that the dogs got out and killed the neighbor’s dog, which eventually had to be euthanized.

“The domestic battery was dismissed,” he said. “We went to bench trial on the dog case and the judge found him guilty of allowing an animal to attack another animal, but they found him not guilty of dogs running at large. I thought that was pretty interesting. I think it was the best case I ever had for a fact pattern and my client still was found guilty.”

Gensler noted that prosecutors also called in a deputy to testify on the state’s behalf.

The deputy was one of the responding officers who arrived on scene at the property.

“The deputy testified that when he got there, the gates were wide open and there were several officers on the scene,” he said. “My client was already under arrest and the deputy testified that the officers turned the suspect over to him where he led my client through the yard to the patrol car. That’s when my client asked the deputy where his dogs were. The deputy basically corroborated what my client said. I anticipated the state would bring an officer to testify that they didn’t let the dogs out. I thought the whole thing was just crazy.”

Gensler also said judge, Jasperson, was bound by local codes, when he issued his guilty verdict.

Additionally, Gensler made sure to mention that he’s not faulting the judge who presided over the case, as the judge’s hands were essentially tied.

Gensler, during testimony, said he put the judge in Turner’s predicament when explaining why he believes his client was not responsible for allowing the pit bulls to attack and kill another animal.

“I argued that if I came to his house, opened his gate and let his dogs out and the dogs went out and attacked somebody or another animal, would he be responsible?” Gensler questioned. “The judge said my client created this situation with the initial domestic battery investigation.”

Gensler also noted that the judge’s decision can be appealed.

“The question is, is it worthwhile?” he said. “My client would have to fork out the money to appeal it and pay an attorney to handle it. What was interesting was, he hired me to represent him for his domestic battery case. I got his domestic battery dismissed and then I got to do a bench trial on his animal citation.”

Guilty ruling aside, Gensler said he believes there were no winners as a result of the situation and verdict.

Turner is scheduled for sentencing in September.

Gensler said the issue of restitution will be discussed at that time.

“My client was kind of incredulous,” he said. “The judge set it for sentencing so the people could come in and talk about how much money they are out in reference to their deceased dogs. My take on the whole thing is the judge felt that the defendant was responsible for his dogs regardless, and the people are entitled to compensation for their dogs being killed so that’s the way I took it. I am not criticizing the decision of the judge. It was what it was and we argued it and the judge made his best decision.”