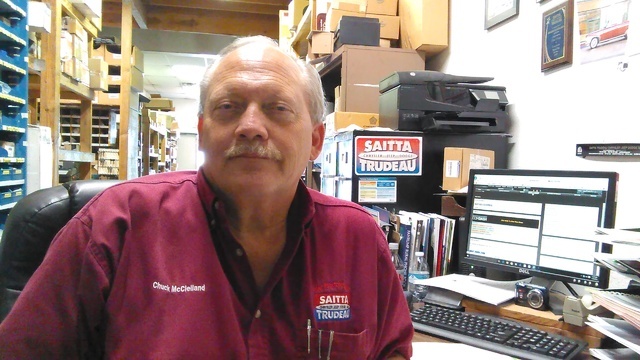 Saitta Trudeau Auto Service Manager Chuck McClelland advises area motorists can save much time, money and headaches by simply having their vehicle serviced on a regular basis throughout the year. He noted that summer driving in Southern Nevada can take its toll on unmaintained vehicles due to the extreme heat. Selwyn Harris / Pahrump Valley Times

A series of recent vehicle fires in the valley should be a cause of concern for all area motorists.

Risks for vehicle fires can be higher in the desert climate, due to several reasons.

As such, Pahrumps Saitta Trudeau Jeep, Chrysler, Dodge Service Manager Chuck McClelland said all vehicle owners should be aware of the risks of vehicle fires and how to prevent them.

He noted that car fires are usually related to problems associated with fuel, electrical systems, as well as the cars exhaust system.

Additionally, the most common causes of vehicle fires are related to fuel and oil-based products within the vehicle.

To minimize risks for vehicle fires, you should have your car checked out at every oil service, McClelland said. Every vehicle has a maintenance service schedule that is recommended by the vehicles manufacturer. By doing that, it can help to lower the risk for vehicle fires.

A cars electrical system is also a common cause of vehicle fires.

Car owners should make sure the battery and starter are installed correctly if they choose to do it themselves.

A missing heat shield or loose wiring on the starter should be remedied immediately.

Improperly installed after-market equipment, such as stereos and off-road lighting pose a real threat for fires.

McClelland also said even a vehicles tires and rims can cause a fire.

Tires are very important, especially in our hot climate, he said. Sometimes people will get a flat tire and they dont realize how hot the pavement is. The metal rim can actually spark up if the tire is flat, and it could catch some of the insulation on fire. Then youve got a real problem because our temperatures are anywhere from 170 – 200 degrees on the pavement. You really have to keep an eye on your tires.

A vehicles exhaust system is often the culprit of vehicle fires in the desert.

McClelland said parking a car on overly dry grass or brush is a very common cause of fires.

You want to try to stay on the pavement if you safely can do so, he said. You would be better off finding a gravel area with dirt. You dont want to be anywhere where theres grass or brush because that will catch fire right away from the heat of the exhaust system.

As the summer driving season is now in full swing, McClelland also offered a few tips on maximizing a cars defenses against the brutal Southern Nevada heat.

You want to check on your coolant to see if the level is where it should be, he said. If you havent had your coolant serviced, especially in older vehicles, youll really want to get that done before hitting the road. It helps to lubricate the water pump and it also keeps the thermostat from sticking closed, which will then stop the circulation and will give you a problem with overheating. So you should have your radiator flushed.

Making sure a cars air conditioning is working properly is a must, especially for drivers traveling long distances.

McClelland said motorists should rely on an authorized service technician when it comes to adding refrigerant to the A/C system, rather than doing it themselves.

I know there are places in town where you can buy the refrigerant and do it yourself, but people shouldnt use that, he said. The problem is not knowing whether the refrigerant in the air-conditioning system is full. At times people can overfill the system. That will definitely blow the seals and it can also blow the refrigerant out and damage the compressor. Thats when it starts getting expensive.

Topping off all of the fluids underneath the hood and making sure hoses and belts are in good shape is also critical, as proper maintenance can reduce the chance of an expensive repair.

We recently had one person come in who had some overheating problems, he said. If youre beginning to overheat, you want to pull over and shut down the engine as soon as you can. We had one driver who did not stop and the problem could have been repaired easily with a $50 hose, but it turned into a new engine for that vehicle. It just became overheated so bad that it melted everything.