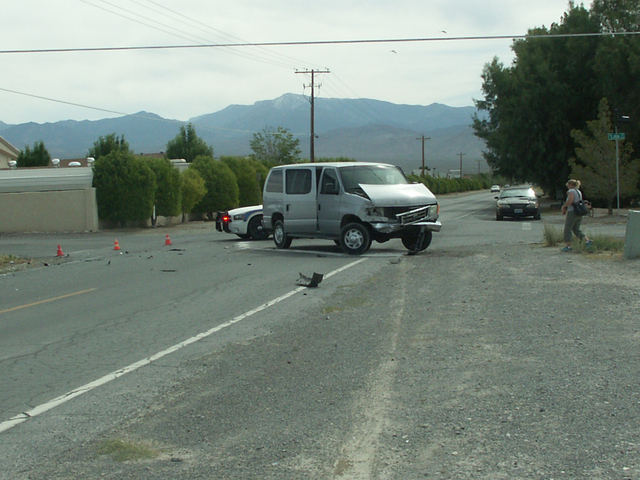 A local family escaped serious injuries after their minivan was broadsided by a vehicle at the intersection of Lola Lane and Wilson Road just after 10 a.m. on Thursday.

An eyewitness said the driver of a silver Ford panel van heading northbound on Lola Lane, broadsided a gold Nissan minivan traveling westbound on Wilson Road after blowing through the intersection’s stop sign.

Witness Mary French told deputies that the female driver of the Ford van did not appear to brake as she approached the intersection.

“The lady in the gray van didn’t even stop because she said she was in a hurry to get to an appointment,” French said.

The vehicle which was struck had three occupants, two adults and one child.

The van ended up careening into the desert roughly 45 yards from the intersection.

“She handled that van like a pro,” French said. “She kept that van from turning over with the baby inside and everything.”

After learning everyone was okay, French said she spoke to the driver of the panel van, who allegedly blew through the intersection.

“That baby was lucky she did not get hurt,” she said. “I asked the woman if the appointment was worth risking killing that baby or the other passengers in the van. I was looking right at the intersection when the silver van hit the gold van. Thank God everybody’s going to be fine.”