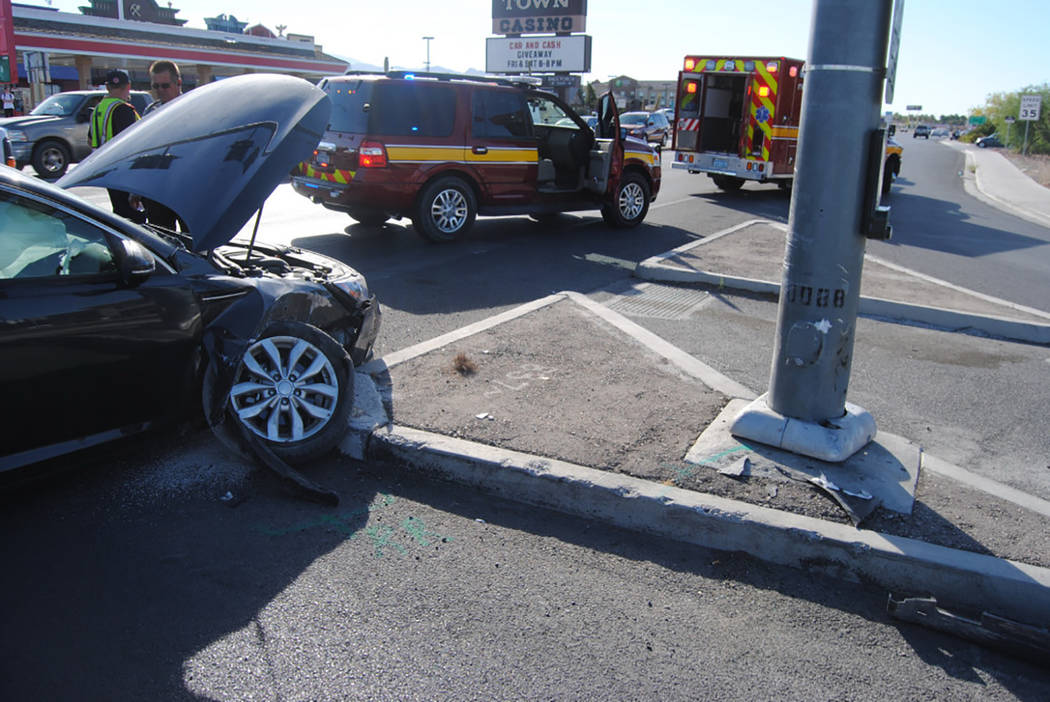 Special to the Pahrump Valley Times One person was transported to Desert View Hospital following a collision with a traffic-light pole on Monday at Highway 372 and 160 just before 8 a.m. The car sustained significant front-end damage to the passenger side and undercarriage. 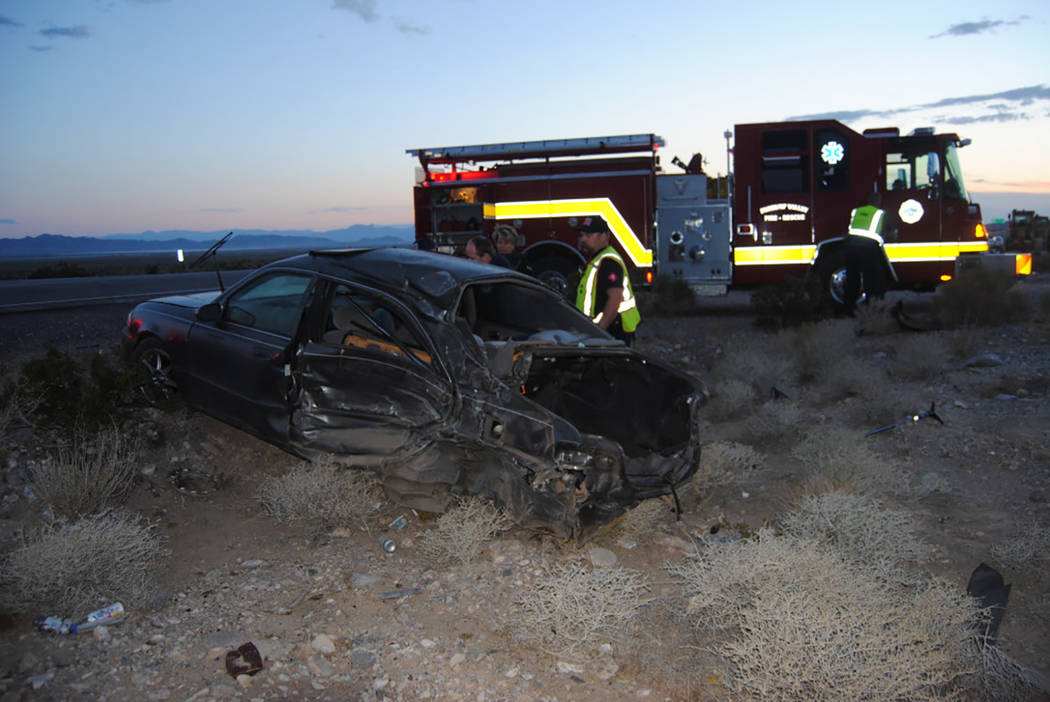 Special to the Pahrump Valley Times The driver of a black sedan was flown to UMC Trauma in Las Vegas following a two-vehicle collision in the area of Highway’s 160 and 95 last Monday, May 15, just after 7 p.m. First responders were forced to remove the driver who was mechanically trapped inside the vehicle. That driver was flown by Mercy Air 21 to UMC Trauma in Las Vegas.

Local emergency crews were met with numerous, diverse calls for service during the past week.

Pahrump Valley Fire and Rescue Chief Scott Lewis said crews responded to a serious two-vehicle accident involving a semi-truck and passenger vehicle in the area of Highway 160 and U.S. Highway 95 on Monday, May 15, just after 7 p.m.

“Upon arrival, we found the accident as described, where the driver of the car was mechanically entrapped,” he said. “We quickly extricated that patient and transferred care to Mercy Air 21, which landed at the scene. That patient was subsequently flown to UMC Trauma in Las Vegas.”

On Tuesday, fire crews were summoned to the 1300 block of West Basin Avenue for a single-vehicle rollover accident just after 6 p.m.

On Wednesday, crews responded to the 2000 block of North Jims Court for a structure fire just after 12:30 p.m.

“Upon arrival, we found an accessory building at the rear of the property that was well involved,” Lewis said. “There were two immediate exposures. Crews quickly extinguished the fire with no extension to those exposures. One person had sustained a small laceration to their hand, however, they refused medical treatment.”

Lewis noted that the initial investigation determined the fire was apparently related to a controlled burn earlier in the day that was left unattended.

Roughly two hours later, crews were dispatched to the 900 block of East Long Street for an unknown type of fire.

“Upon arrival, we found a makeshift structure at the rear of the property consistent with that used by a homeless camp,” Lewis said. “That fire had extended to several very large mature trees as well as the grounds cover. There were immediate trailer exposures and crews did an excellent job accessing and extinguishing that fire without incident. We were called back several times for spot fires that had also developed in the area.”

“Upon arrival, we found an accessory building at the rear of the property that had extended to a camper and travel trailer,” Lewis said. “Crews came in and controlled that fire with no further extensions past the point of where we found it. There were no injuries reported, but the investigation revealed that it was apparently related to a controlled burn on the property.”

At 5:30 p.m., on Wednesday, crews were dispatched for what could be considered an unusual service call involving a swarm of bees.

“We were dispatched for an investigation into an environmental issue regarding bees,” Lewis said. “We have had several calls in the area for swarming bees, which are transient, so they are moving to local properties around the valley. There was no evidence of (a hive) “but they were actually moving around and the size of the swarms were pretty impressive. This would be a good time to remind folks to just protect their animals, notify their neighbors and don’t disturb the bees.”

Additionally, Lewis said depending on the temperatures, the bees will disperse and become less active.

“Usually if the swarms are left alone, they will move on,” he noted. “If you see evidence of a hive, it’s a different story. If it’s on private property, you would need to summon an exterminator if you feel it’s necessary. If not, then it’s their call. We can only do something if there is an immediate life-threatening situation.”

On Thursday, May 18, crews were dispatched for a structure fire on the 4300 block of West Gerald at approximately 7:30 p.m.

“Upon arrival, we found a doublewide manufactured dwelling with light smoke showing,” Lewis said. “It was a mostly extinguished structure fire and the structural elements of that particular building were traced back to an electrical origin. There were no injuries.”

On Friday, crews were dispatched for an injury motor vehicle accident on Pahrump Valley Boulevard at Highway 372.

Upon arrival, crews found a quad accident where the rider sustained significant injuries to their lower extremities.

“We had wanted to transport that person to Mercy Air, however, they were unavailable due to being on another flight,” Lewis said. “That patient ultimately was transported Level 1 to Desert View Hospital.”

On Saturday, May 20, crews were summoned to the 800 block of South Margaret Street just after 1 a.m. for a utility-related fire.

“Upon arrival, we found a power pole on fire and also found two transformers that were burning,” Lewis said. “Crews created a safe area, where they awaited the arrival of Valley Electric Association crews, where the scene was transferred to them.”

Later that afternoon, crews were dispatched to the Walmart parking lot for a reported vehicle fire just before 4 p.m.

“Upon arrival crews found the vehicle with fire showing from both the passenger and engine compartments,” Lewis said. “The area of origin was traced back to a probable area within the dashboard of the vehicle. There were no injuries or extensions.”

A 6:50 p.m. police pursuit prompted the response of fire crews at Lola Lane and Black Street just before 7 p.m.

“Upon arrival, crews found one vehicle in the middle of the roadway,” Lewis said. “There were several people lying prone on the ground, apparently in the care and custody of Nye County Sheriff’s deputies. All declined medical treatment and they were subsequently transported from the scene by sheriff’s deputies.”

On Monday of this week, crews were dispatched for an injury motor vehicle accident at Highway 372 and 160 just before 8 a.m.

“It was a single-vehicle accident and upon arrival, we found that vehicle ran into the median of a light standard fixture,” Lewis said. “The car sustained significant front-end damage to the passenger side and undercarriage. While the occupant was not entrapped, they were still in their vehicle, where they were medically assessed. That patient was ultimately transported to Desert View Hospital.”