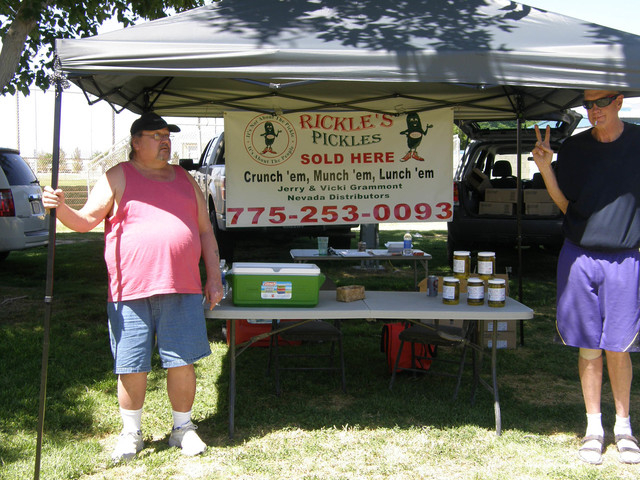 After missing a specialized pickle from his home area, a local business man took matters into his own hands and brought the business to Pahrump.

Jerry Grammont and his wife Vicky started selling Rickle’s Pickles in town in 2013 after Jerry grew a liking for the pickles while living in the Midwest.

“I was living in Michigan for awhile, and we were coming back here to Nevada, where she’d (Vicky) been living for 25 years, and I stocked up on them before we left,” Grammont said. “I wanted a couple of cases and they offered me a chance to be a distributor for them in Nevada.”

One of Rickle’s Pickles slogans is, “Once you go Rickle, you’ll never go pickle,” and for Grammont the unique taste of the pickled delight did just that.

“Rickle’s Pickles are always crunchy, that are in a brine of garlic and jalapeno, that start out a little sweet, and has a little zing at the end with the jalapeno,” he said.

Rickle’s Pickles originated in Indiana by its creator, Rick Corcimiglia, in 2008 and since have steadily expanded their business to 20 states across the United States.

Pahrump marks the furthest west that Rickel’s is sold, and are sold as far east as New York and Florida. They’ve also added to the single pickle product line, as they’ve started selling their own mustard and will debut a new horseradish flavored pickle and a pickled asparagus this summer.

Grammont has one business where Rickle’s Pickles is sold out of regularly in town at Liquor and Tobacco Express, but sells a lot of the product as a vendor at various events around town.

“I do the Fall Festival, the Wild West Extravaganza and pretty much everything,” Grammont said.

Grammont has heard positive reaction so far from customers, that were tentative about trying the pickles because of their ingredients.

“Very well,” he said. “Sometimes we get people saying they don’t like jalapenos, or they don’t like one portion of another, and I give them samples and they fall in love with them.”

Once Grammont gives those customers that initial taste, he said they often order from him in bulk thereafter.

“Once they taste them, they’ll buy a jar,” Grammont said. “And before the end of the festival, they buy six jars.”

Grammont has built up a steady customer base from doing special events, as he hands out his business card and tells the customer he will deliver them anywhere in town. They take him up on the offer, as many of them buy large quantities from him regularly.

To find out more information about Rickle’s Pickles go to www.ricklespickles.com or to inquire about carrying or ordering them direct give Jerry Grammont a call at 775-253-0093.