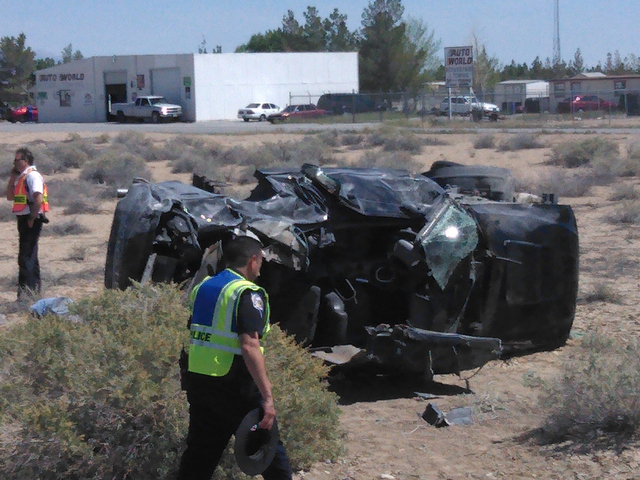 A local man is dead while four Pahrump Valley High students are recovering from a single-vehicle rollover crash along Highway 372 just west of Linda Street on Wednesday.

The Clark County Coroner’s office on Thursday identified the deceased man as Jason Trenkle, 38, of Pahrump.

The cause of death has not been determined.

Trenkle was driving his high-performance 2001 Ford Mustang GT which was posted for sale on Craigslist at the time of the rollover. According to multiple Facebook posts by family and friends of the students, one of the students was interested in purchasing the car.

Rivera said that according to the four passangers and another witness, the Mustang passed a vehicle at a very high rate of speed.

“Unfortunately the driver failed to maintain control and went off the roadway, which resulted in several of the occupants being ejected from the vehicle,” Rivera said.

Witnesses said the car rolled over multiple times traveling more than 100 feet before coming to a rest on its side.

Investigators have not yet determined whether all occupants were wearing seatbelts or whether alcohol or drugs played a factor.

The four male teenage passengers were initially transported to Desert View Hospital in Pahrump, while the driver was air-lifted to University Medical Center in Las Vegas, where he would later succumb to his injuries.

The boys were then transported to Sunrise Hospital in Las Vegas with varying degrees of injuries, according to Facebook posts by family and friends.

Trenkle was president of the Pahrump Gunfighters, who are scheduled to take part in the annual Wild West Extravaganza, which kicks off today at Petrack Park.

As west Highway 372 is notorious for rollover crashes, Rivera offered a simple tip for those wanting to avoid similar circumstances.

“You just want to watch your speed and make sure your seat belt is secured because this is a 55 mph stretch of highway,” he said.