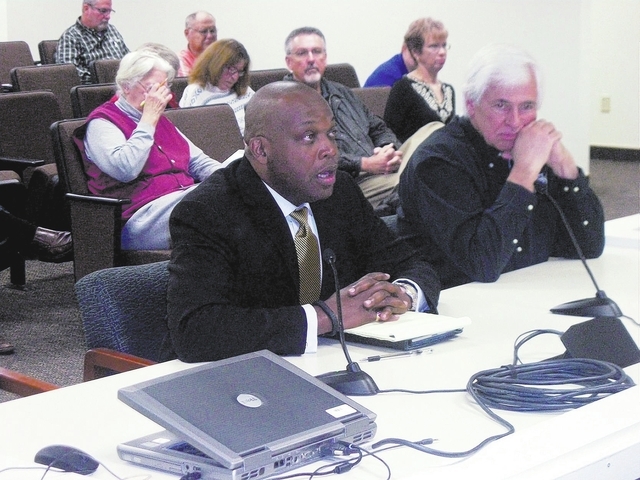 County commissioners didn’t show any opposition Tuesday as they voted to direct staff to draft a medical marijuana bill.

Nye County is allowed one permitted medical marijuana dispensary under Senate Bill 374 passed in the last session of the Nevada Legislature. The law is silent on how many cultivation centers and bakeries would be allowed, according to Assemblyman William Horne, D-Las Vegas. The Nevada Department of Health is still drafting regulations, he said.

Sheriff Tony DeMeo shared his concerns from a law enforcement standpoint about patients “doctor shopping” for the drug.

Nye County Nuclear Waste Project Office Director Darrell Lacy said the county needed to address zoning, perhaps requiring a conditional use permit and whether they wanted county staff to go through the process of drafting an ordinance.

“We need to make this as safe and secure as possible,” Commissioner Dan Schinhofen said in making the motion. “They can’t enter into them without licenses to purchase the product. I think light industrial will be best so it’s not on the main street. I know they have to look like pharmacies.”

Horne said Nevada voters passed a ballot question in 2001 to change the constitution allowing people to obtain medical marijuana for medicinal uses under the care of a physician who would prescribe it. But he said not everyone was able to cultivate a plant for their own use under the law.

“What has transpired over the decade plus are people seeking other ways of getting their medicine and some of them found themselves exposed to criminal prosecution,” Horne said.

A judge found there was an inconsistency in state law and statutes, with a need to find clarity, he said.

Commissioner Lorinda Wichman wanted county staff to check California, Arizona and Colorado laws. But she admitted she hated to commit herself to support the law until she knows the details.

“When you start looking at everything that goes into it, starting with potential intervention from the federal government, which still maintains it’s illegal, what we’re finding from the federal government as we look into this, they’re deferring to local jurisdiction when it comes to regulating illegal drugs until it rises to a level they’ve traditionally gotten involved,” Kunzi said. “Local governments are given a great deal of latitude how they want to regulate it from zoning.”

Kunzi suggested a special use permit to regulate the medical marijuana establishments, which could also open up a new zoning category regulating other things, like fireworks. He said county officials could work with the sheriff to build in whatever protection he wants, to make sure there’s no money laundering, money going to some crime syndicate or other controls that would invite federal intervention.

DeMeo said he was a former drug abuse counselor in New Jersey. He said when the law first addressed medical marijuana it was intended for patients with very serious illnesses, like HIV and severe cancer, to provide some relief.

“Now if you go to your doctor, if you have a pain in your shoulder you can get a prescription for marijuana. The problem we’re going to have with law enforcement is people doctor shopping,” DeMeo said. He added there’s problems with driving while stoned. “We already had deaths on our highways from marijuana use while driving a motor vehicle.”

The sheriff said he doesn’t know about the future of medical marijuana in Nevada, since the federal government still says marijuana is illegal. He questioned how to enforce the law without enough officers on the street.

DeMeo said 95 percent of the people getting prescribed marijuana are not the high risk people the law was intended to serve. The sheriff said Nevada doesn’t have good programs for substance abuse, he predicted medical marijuana would create another problem, like the comeback of heroin in Pahrump and the painkiller Oxycontin.

Schinhofen said the special use permit could fund those type of law enforcement problems. He said there will always be doctors who are in it for the money who will write prescriptions.

But Kunzi said DeMeo raised valid law enforcement issues. “The problem is we’re not going to solve it with this issue,” he said.

“We had a problem not too long ago where a person who had a grow house illegally — which under the current law they’re allowed to have five plants if they’re a provider — well they had a phony prescription from a phony doctor that said they had 96 plants. One person could not physically smoke that much marijuana,” Kunzi said.

Horne said the law is designed for medicinal use, he assured the commission the Legislature didn’t want to set up a bill similar to California.

“I think one of the issues you have in California is this doctor shopping. That environmental allowed to grow and prosper and do that,” Horne said. Nevada could have mechanisms like education, he said, adding the state has a medical board that disciplines physicians who overly prescribe cannabis and other drugs, basically opening up pill shops.

As far as growing the drug, Horne said, “that’s a problem today even without the law.” He added, “nothing in this law and anything you do will make those lawbreakers in this arena be legal.”

He was confident through ordinances, fees, special use permits and other requirements the county will be able to have funds to address law enforcement issues.

Horne said he advised his client, the Obama administration made statements they’re not going to pursue medical marijuana businesses, if they stay within the confines of local laws. He said that could change with a new federal administration, but added it was unlikely federal authorities in the future would be directed to raid all of them.

“Anybody can go to a doctor and get a prescription for medical marijuana,” DeMeo said if the bill is passed. “As far as California, they had more medical marijuana dispensaries than they had Starbucks in L.A. County.”

Under state law, applications for medical marijuana establishments will be accepted during a 10-day window sometime after April 1, 2014. There will be 40 dispensaries allowed in Clark County but only one in Nye County. SB 374 requires medical marijuana establishments to be located in a commercial or industrial zone. A $1,000 non-refundable fee is required to process the request for qualifications, part of a one-time nonrefundable application fee of $5,000. A letter is required from the county stating it supports the applicant. Copies of tax returns, evidence the applicant has no less than $250,000 in liquid assets to cover the initial opening costs, resumes of proposed owners are part of the requirements to obtain a license, which will be issued by the Nevada Division of Health which will evaluate and rank the applicants.