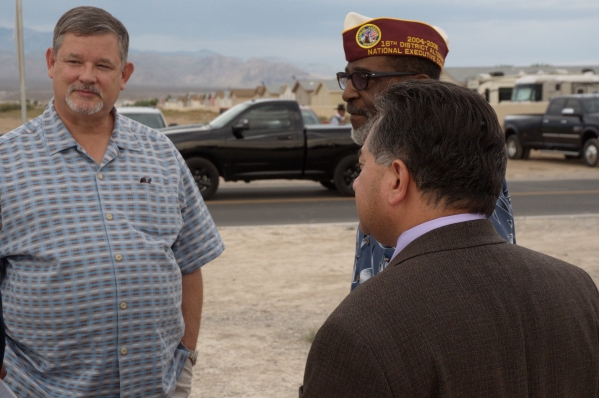 Local veteran Dr. Tom Waters said he is remaining “cautiously optimistic” at the probability of a new VA clinic in Pahrump.

Waters was part of more than a dozen veterans on Friday and Tuesday who officially dedicated a sign declaring the parcel of land along Lola, just north of Desert View Hospital as the site of the new clinic.

Both the land for the clinic and the signage were provided by local land developer Hollis Harris.

“I asked if we could have a sign put up declaring the land as a future home of the Pahrump VA clinic and he said he’ll take care of that,” Waters said.

The Department of Veterans Affairs on Aug. 5 announced the awarding of a $12 million contract to W&J Development LLC for the 9,800 square foot clinic. The contract requires the Pahrump clinic to be completed 18 months after groundbreaking, according to Rep. Cresent Hardy, R-Nev. Although no date has been announced for the groundbreaking, officials expect it to happen by the end of this year.

Waters said he didn’t want to get his hopes raised just to be let down once again, as it has been the case over the years.

“I am still cautiously optimistic,” he said with a laugh. “We have heard promises before but we have never had a sign or the fact that it has been approved by the Veterans Administration. It is already funded and we are moving forward. Once we have the groundbreaking ceremony, then I will believe it.”

“It’s been a long hard-fought uphill effort and everyone here today has had a role in it,” he said.

Hardy’s District Director Sonia Joya said this week that Hardy will continue to monitor progress on the facility until its completion.

“Congressman Hardy continues to work hard with VA officials in bringing a clinic to Nye County and recognizes the committed efforts of the various veteran organizations, delegation and community leaders in this ongoing challenge of bringing this important medical facility to Pahrump,” she said.

Dr. Ramu Komanduri, who serves as chief of staff at the VA clinic in North Las Vegas, said the clinic will better serve Pahrump’s high concentration of veterans, which is estimated at 6,000.

“We will be able to provide all of the detailed primary care expected,” he said at the event. “We will also provide mental health services as well as specialty services, some by telehealth and telemedicine.”

“We are looking to aggressively recruit health professionals to Pahrump,” he said. “Recruiting qualified staff is not the easiest thing to do here because it is a small community. We will be offering additional incentives to bring great staff here. We need more nurses and more doctors and other health care providers, including social workers.”

Waters said that once the clinic is operational, it will take much stress off local veterans who now have to travel outside Pahrump for medical procedures and veteran-related matters.

He noted the new clinic will double the size of the current VA clinic at 2100 E. Calvada Blvd.

“We do have a Veterans Administration clinic in Pahrump but it is so small,” he said. “They already have four clinics for veterans in Las Vegas along with the hospital. There were times local veterans in Pahrump had to go to the VA hospital in San Diego. We are very fortunate to have a hospital in North Las Vegas as As a gesture of goodwill and cooperation, Waters said he bestowed what’s known as a U.S. military “Challenge Coin” to Harris, fellow veteran Reggie Knight and Dr. Komanduri for all the work the men provided for local veterans.

Waters said the coins have a special significance among those who have served in the military, as senior military officers and senior non-commissioned officers.

“They were the only two challenge coins that I’ve given out,” he said. “On one side of the challenge coin, it shows my rank of lieutenant colonel and on the other side it shows United States Air Force, which is the branch I was in. They are expensive coins but they are ones that we think are very worthwhile to encourage people and thank them for the work that they have done.”