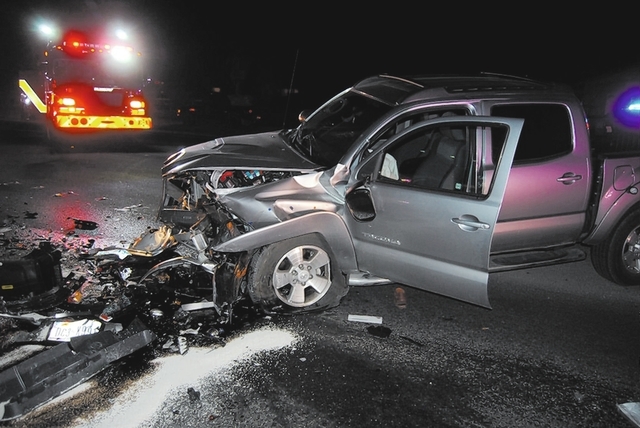 It was the first fatal accident of the year in the agency’s southern command area.

According to a media release, the preliminary investigation revealed Shoup was driving a silver 2014 Toyota Tacoma pickup truck northbound on Highway 160 just before 10 p.m., when Shoup allowed the Tacoma to cross the center median and enter the southbound travel lane where the front of the Tacoma struck the front of a 2007 Saturn sedan.

The driver of the Saturn was traveling southbound on Highway 160 when the Tacoma hit the sedan just north of Calvada Boulevard.

Stuenkel said another car traveling along the roadway was also struck in the aftermath of the initial collision.

Additionally, Nevada Highway Patrol Trooper Loy Hixon said the initial investigation shows that Shoup, who was not wearing a seatbelt, was impaired at the time of the collision.

Occupants of the Saturn and Chevrolet are expected to recover from their injuries.

The Nevada Departments of Public Safety and Transportation reported last week that there were 11 traffic fatalities in Nye County in 2014, the same as in 2013. Eight of those deaths involved vehicles, two motorcycles and one pedestrian. Two of those deaths were in alcohol-related crashes.

Statewide, 284 traffic fatalities occurred on Nevada roads in 2014, an increase of 18 deaths compared to the previous year. Nevada traffic fatalities have slightly risen over recent years after trending down from an all-time high of 432 in 2006.