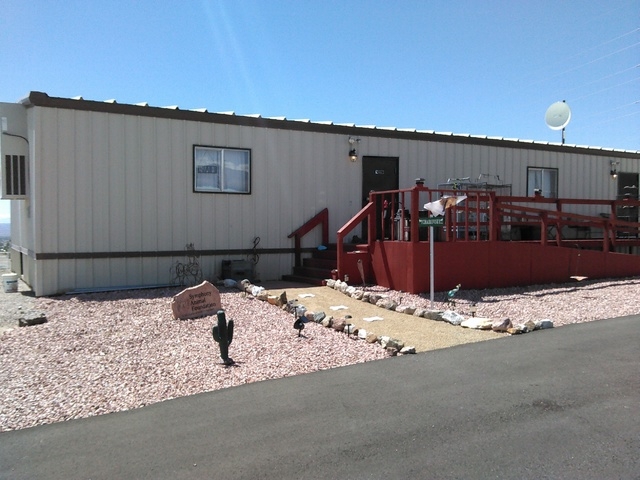 After six years of setbacks, disappointments and funding issues, Symphony Animal Foundation has opened its doors for business.

The facility can accommodate 26 dogs while cats and kittens have a cozy room all to themselves.

Director of Volunteer Services, Colleen Landay, said the foundation is equipped to handle other four-legged creatures as well.

“We also take horses but we’re going to keep our limit at three right now,” she said. “It’s really nice and cozy here for them all. These structures used to be modular classrooms that we acquired from the school district and they’re very nice sized.”

One important message Landay noted, is the fact that the foundation is not a typical animal shelter, where anyone can just drop off a stray animal they found walking the streets and neighborhoods.

She said if someone calls the foundation because they found a lost pet, the individual is urged to call Nye County Animal Control, which performs such services.

“We can only take animals that have been relinquished from their owners,” she said. “If a pet owner is moving and they are unable to keep the animal, they can bring them to us. For dogs, the fee is $60 and for cats it’s $30 because we have to keep this going.”

Since the facility opened its doors last week, the foundation has already taken possession of several pets whose owners were forced to give them up.

Landay said they are now ready for adoption.

“They are two male puppies that are mixed Labrador breeds,” she said. “They are kind of white and they’re very, very cute. Both are 6 months old and they are ready to go. The two are already house trained and they are the best little puppies in the world.”

In order to properly care for the animals, the need for volunteers is essential.

Landay said there are plenty of openings for the right persons to donate their time to the foundation.

“We have openings for a cat room attendant, adoption counselors, dog walkers as well as office and clerical,” she said. “We also have openings for fostering animals and farm animal attendants. We do have a lot of volunteer positions that need to be filled so anyone who wants to be a volunteer please call us.”

Landay also said the foundation welcomes visitors from 10 to 4 p.m. Monday through Saturday.

“It’s beautiful and folks can see where the animals are going to be and see what a nice facility it is,” she said. “I know a lot of people in town who were as anxious as us to see Symphony’s open and we finally got it open. We are behind Pahrump Valley Auto Plaza, just take the gravel road to Wheeler Pass, turn right and just keep going until you see the portable structures out here, you can’t miss us.”

The foundation is also holding what’s known as a “Barking Lot” sale today at Sniffany’s Gifts and Thrifts store at 1230 Loop Road from 5-7 p.m.