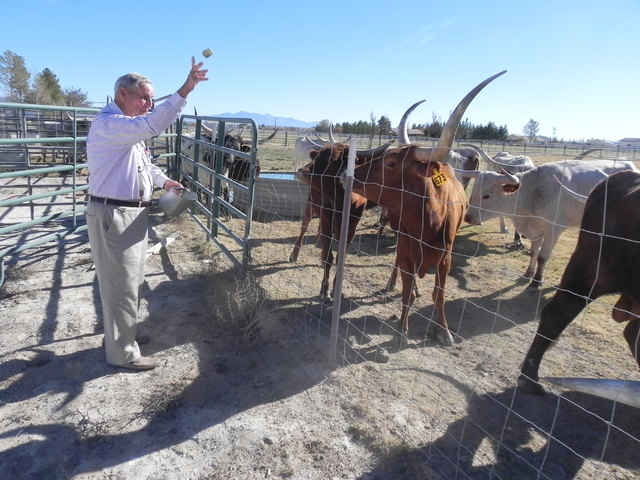 While Americans are digesting their turkey dinners on Thanksgiving, there’s a few locals who prefer beef. Texas longhorns have a home on the range on the south end of Pahrump, where longtime developer Hollis Harris is raising a herd of 20 cattle on Bond Street.

“We had a little 30-acre piece on the end of Homestead. We were farming a little alfalfa on 15, 20 acres,” Harris said. “Dan (his son) and I were farming it to protect our water rights. There was 75 acre feet of water.”

Harris invited Agee Spidel, a retired Texas oilman who brought 22 head of longhorn cattle to Pahrump a few years ago and was having to feed them hay, to lease his property to temporarily feed them.

“When he got his alfalfa all planted he wanted to move the cows back and I said, ‘Agee, I don’t want you to move,’” Harris said. “I said I like them and I tried to buy his whole herd. Then he wouldn’t do it. But he sold me about half of them, plus the bull, which was a good deal.”

The herd increased to 26 head in the past few years, Harris said he sold off a few head during an auction in Bakersfield, Calif., for $500 apiece. Mexican cowboys like to purchase a whole cow for barbecues, he said.

“The price of beef is way up,” Harris said. “Feed has gone out of sight as far as buying hay, but most of the beef cattle are raised on pastures and dry land farming fields and stuff and they go to markets. But there’s a real demand for beef. Farmers are also on the opposite end, corn prices are down, so consequently the feed lots have a lot of incentive to buy these cattle and put them on corn feed.”

Harris said he’s raising longhorns because he likes the look of them and they deal well with the local climate.

“They’re a beautiful cow,” Harris said. “They’re a hearty cow, they’ll eat anything. They’re good foragers, you know they come from Texas where they have lots of droughts and lots of open fields and they’re survivors.”

For Harris, 83, who first moved to Pahrump in 1963 from Five Points, near Fresno, Calif., it marks a re-entry into the cattle business. Harris said he formerly owned 110 head of cattle on his 650-acre farm, black angus and white herefords, but sold them off in the 1970s to help pay off a $450,000 loan from the Production Credit Association.

“We also started subdividing because we were becoming a bedroom community of Las Vegas,” he said of Pahrump at the time. “I got enough money to pay off PCA.”

Harris copied after longtime Pahrump rancher Tim Hafen, a resident since 1951, who was the first to begin subdividing. Harris said he subdivided 320 acres and sold off two and a half-acre lots for $3,000, but Preferred Equities Corporation was getting $7,000 to $8,000 for one and a quarter-acre lots. Harris’ subdivisions are Desert Trails subdivision, Jocelyn Estates and Thousandaire Estates. He donated the 30 acres where Desert View Hospital now sits.

On a trip to see his beloved longhorns, he pointed out a favorite named Tom Jones, after the singer. Tom Jones is a prominent bull Harris estimated weighed about 1,600 pounds and is kept in a separate pen. Harris loaned Tom Jones as a stud to fellow rancher Chuck Price, who raises some longhorn cattle on Gamebird Road, but said the big bull almost tore up Price’s pen.

“He’s not too friendly at times,” Harris said. Tom Jones sported a longhorn rack Harris estimated was about 75 inches from tip to tip and looked menacingly at a reporter taking his picture. Tom Jones fathered a calf named Delilah, after a Tom Jones song.

“He gets along better with me than he does with anybody else for some reason,” Harris said. “I will breed him to some of the unrelated calves that are out there, maybe.”

Besides the beef, the animals are prized for their horns. Harris said the horns on Tom Jones can fetch $400.

“The big push on Texas longhorn people is to grow very long horns,” he said. “They developed a very good pedigree.”

Harris feels at ease walking in the pasture with his longhorns. He was feeding them chunks of alfalfa Wednesday morning. One longhorn already had a healthy head of horns, at only 18 months old.

“Look at their horns … aren’t they beautiful? He’s just 3 years old,” Harris said, feeding Stars and Stripes Command, a longhorn sired from a bull named Star Base Commander. One calf was named Don Juan, after his brother who died a year ago.

“I love it. I really feel good. I haven’t got anything to do. It gives me something to do. I come here every day,” Harris said.

Since buying his original herd of longhorns, Harris said he bought a bull and a heifer a few years ago from the Star Creek Ranch in Texas, recently named the breeder of the year in the Lone Star State.

“Some of these longhorns, the Star Creek Ranch owner had a heifer calf that sold, she was not quite two, but she sold for $36,000,” Harris said.

But don’t ask Harris whether he’s making a profit. It’s all a labor of love for his longhorns.