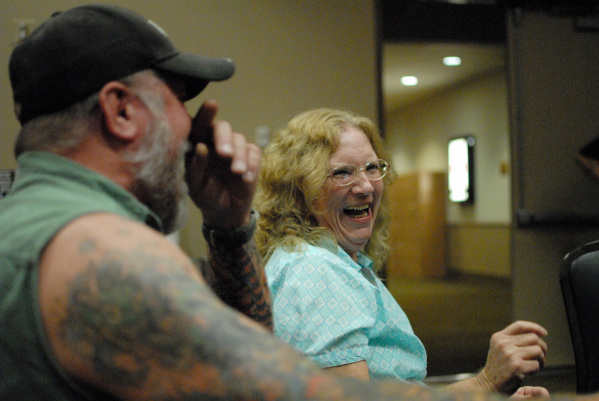 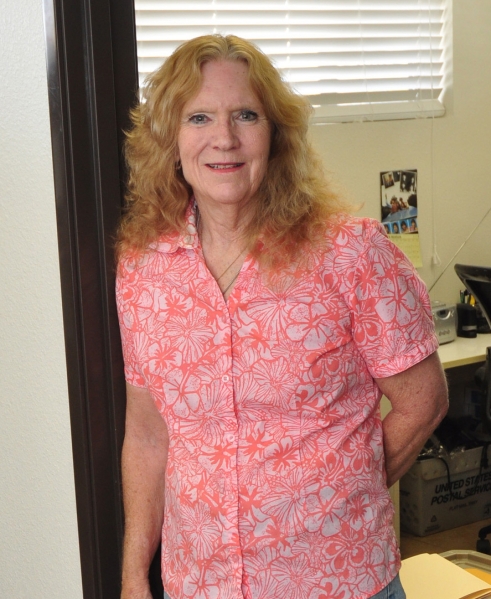 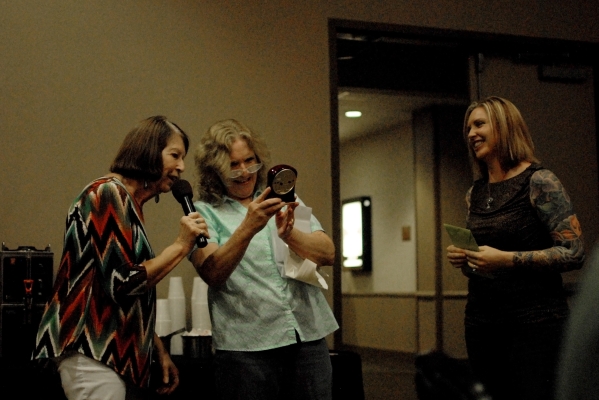 For the past 10 years, if you arrived early at the Pahrump Valley Times office you would have run into a lady dressed in jeans and her favorite T-shirt.

Every work day she could be seen in the old office vacuuming the floor, taking out the trash and cleaning the bathrooms. She even made all the employees coffee. No, this was not the night custodian, or even the “girl Friday”, it was Marie Wujek, the publisher of the Pahrump Valley Times and this was part of her style. Wearing suits to work was definitely not her thing.

As publisher, she did her share to keep the paper afloat to save money and cleaning was just one of her things she did.

“One of the things I had to do was to cut corners to keep the paper going and in the black and doing the cleaning was part of that,” Wujek said.

After a decade as publisher, Wujek will be moving on to greener pastures. Her last day at the office is today.

Wujek arrived at the Pahrump Valley Times during turbulent times. The company was transitioning at the time from a family-run business into the corporate world. When she was first hired in 2000, she was hired to straighten out the books as a general manager.

“When I came on I brought on a whole new accounting program and way of doing things,” she said. “There weren’t even any invoices to look at when I first came here.”

The publisher’s job came later in 2004 when the Thurlow family sold the paper to Stephens Media, who at the time owned the Review-Journal and many other papers.

Once under Stephens Media, the company came to Wujek to head the paper and during her reign as publisher she slowly brought the paper into the corporate world, but did so without sacrificing that small-town feel.

In her time, Wujek has seen five editors come and go and has survived two corporate takeovers, the newest one being New Gate Media’s buyout of Stephens Media.

During that time she has had many accomplishments.

“While I have been here I have added to the products to build the sales,” she said. “There has never been a Nevada newspaper to win the Cornerstone Award from the chamber of commerce and we won two years ago, that was huge. Also, our winnings at the Nevada Press Awards have been really good. The way I look at it is if I have a happy staff that knows that I am going to go to bat for them, then that’s half the battle and I feel good about that.”

Marie is also well remembered by her bosses.

“Marie has done an amazing job of leading the Pahrump Valley Times for more than a decade,” said Geoff Schumacher, Stephens Media’s former director of community publications at the time. “Through good times and difficult times, Marie was a steadfast force and always had the paper’s and the community’s best interests foremost in her mind. Marie was a great fit to helm the Pahrump Valley Times, and her passion and common sense undoubtedly will be missed at the newspaper and among Pahrump’s community leaders.”

Another one of her bosses had this to say, “Marie helped the Pahrump Valley Times grow in stature and influence over the past decade. She has been an excellent steward of the newspaper and we wish her the best,” said Mark Hinueber, vice president of the Las Vegas Review-Journal.

The fact that she has kept the paper going through thick and thin will only be part of her legacy. Wujek brought to the table her caring for people. Her legacy will be while corporate America battled around the Pahrump Valley Times, cutting massive amounts of jobs at the Review-Journal to save costs, Wujek fought to save jobs at the paper and she did so by listening to her employees.

“The one thing I will miss most about this job is the people because the staff was so dedicated to me,” Wujek said. “They knew I would fight for them.”

Henry Brean, the first editor to work for Wujek, talked about what she did for her employees.

“Marie was the glue that kept the newspaper together through more than a decade of changes in ownership, budget cuts, staff shake-ups and technical difficulties,” Brean said. “Through it all, she fought for her people and continued to support them whether they stayed at the paper or not.”

Heather Ruth is one of those employees that Wujek has fought for. She has worked in advertising since Marie arrived and then some. She has been with the paper for 21 years and this is the only job she has known. Ruth said she is sad to see Marie go because she has been there for all her good times and all her bad times.

“I’ve literally grown up here, and we’ve gone through a ton of stuff together. Marie never handled any of it like a boss. She has always been very motherly towards me. She’s helped me so much over the years,” Ruth said. “I will miss the fact that she is very approachable and is a good listener. I know that I would never have found a boss anywhere else that would have given me the freedom to raise my family the way I needed. If I had an emergency it was no big deal. Marie has always trusted that I would get the work done.”

Mary Ann York came from the Review-Journal and has been working in Pahrump for the past 13 years and said Wujek made the paper her family.

“She made working at the PVT a true labor of love, both for the community and her staff,” York said. “She will be deeply missed, but will always be part of the family here in Pahrump wherever she goes.”

Just about every employee had something good to say. Kelly Garcia had only been here a year and was deeply moved by Wujek’s caring.

“In the one year I have worked alongside Marie, I have come to know her as being such a lovely woman of integrity as well as such a caring, thoughtful person,” Garcia said. “I have learned so much from her in a very short period of time, and I truly am so grateful for that time.”

In addition to her employees, the departing publisher has made a big impact on the community from the leaders to the business people.

“I always compared Marie to the man behind the curtain in the Wizard of Oz,” Eastley said. “She never wanted to be the news, but instead was the dedicated overseer of telling the truth through the articles submitted by staff. I will miss her personally, and the town will find her shoes hard to fill.”

Nick Moore, former president of the Pahrump Chamber of Commerce, also had some words to say about her departure.

“I couldn’t say enough about her,” Moore said. “With her, honesty is everything. She also has integrity and is not two-faced. I loved the fact that I could always call her and get an honest opinion. She will be missed and is a valuable asset to the paper.”

Wujek said it was not all turmoil at the paper and that what she remembers most about being in Pahrump is the community and their ability to give.

She recalled Michael Brown and his wife Amanda. Michael Brown was a resident and was a member of the band Sha Na Na. While living here in Pahrump, his wife became ill with terminal cancer. She passed away and Michael Brown decided to raise money for a cancer foundation.

“This was around 2007 and the Pahrump Valley Times and the Pahrump Nugget had this fundraiser, which brought the band Sha Na Na to the Nugget and got the whole community involved. We raised $35,000 for her foundation. The community showed how giving they are.”

Wujek also remembered a man and his family that she helped during Christmas.The event was organized by Pahrump Disability Outreach Program, where people donated Christmas presents to parents who could not afford to buy them. She said she was helping this charity that year collect Christmas presents.

“The family was down on their luck because the man had lost his job,” Wujek said. As she described the situation a big smile came upon Tom Wujek, her husband.

“I remember that Christmas,” he said. “We don’t usually buy each other Christmas presents, but that year I had a chance to make a lot of kids happy by buying kids presents. I had a great time doing that.”

Marie Wujek then said the man who had lost his job started crying because all these churches had provided his kids with new clothes.

“The good thing about this is he was there next year helping that very charity because he had gotten a job,” Marie Wujek said. “People in Pahrump have great hearts and they just love to give. I will miss that.”

Contrary to popular belief, Marie Wujek is not retiring.

“We are not independently wealthy and so Tom and I will still be working,” she said.

The two of them will be living in the small lakeside town of Show Low, Arizona, which has a population of around 12,000 people.

“We also plan to do a lot of fishing,” she concluded.