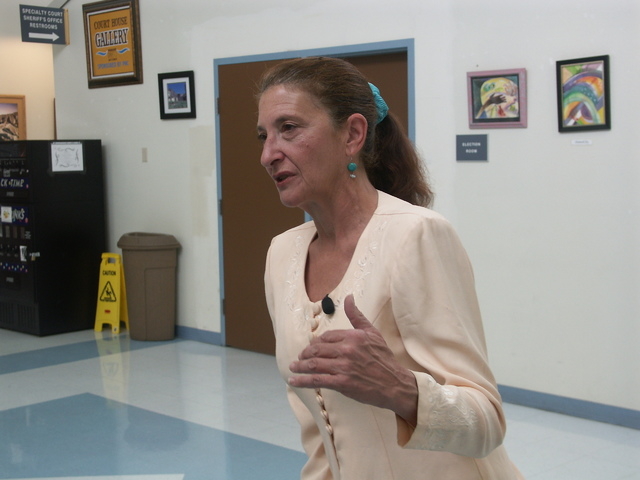 Local attorney Nancy Lord called last week’s removal of at least three dozen dogs from her property as a personal “holocaust” during a press conference Friday.

County officials say Lord was in violation of Nye County Ordinance 430, which requires animal owners with more than five dogs or cats over the age of six months to obtain a residential kennel permit.

Owners with more than 10 dogs or cats over the age of six months must obtain a commercial kennel permit.

Due to some of the stipulations in the permit, including regular yearly visits to the property, Lord declined.

Nye County District Attorney Brian Kunzi said this week that Lord knew she was in violation of the law but did nothing to address the problem.

He also said his office is looking at filing criminal charges against the attorney.

“Ms. Lord admitted during discussions with me and animal control that she had over 40 dogs in her possession. She clearly is in violation of the law. We were attempting to negotiate a way for the County to assist her in becoming compliant without the need to resort to the initiation of other court actions, which could include criminal charges,” Kunzi said via email.

Kunzi said county officials agreed to work with Lord on several occasions to help her comply with the law.

“She abruptly withdrew from the agreement. We had probable cause to believe she was harboring animals on her property and that she was incapable of keeping them from running at large to the terror of residents in her area. The court agreed and issued a search warrant authorizing the seizure of the animals. Those animals will be maintained as evidence in criminal charges that are now being processed,” he said.

As a result of Kunzi’s action, Lord held the press conference last week to discuss an emergency motion she filed for the immediate return of her animals.

Lord claims that her due process rights were violated, as were the rights of Larry Moore, who also lives at the residence.

“The military-style assault was met by the complete cooperation by Mr. Moore, including the heartbreaking decision as to which dogs would be seized — like the children to be killed by the Nazis in the famous movie Sophie’s Choice,” Lord wrote in her motion.

Lord, meanwhile, said while she does not dispute that she was in violation of the law, her dogs have never bitten anyone in the neighborhood.

“The beloved pets of Nancy Lord and Larry Moore were seized using cruel choking neck loops, not to obtain evidence, as there has never been any dispute as to the number of dogs at the property, it has never been denied or has been an issue. Nor has the fact that dogs were getting loose ever been denied, while after three years of incidents of dogs leaving the yard, in packs as large as 15, there has been not a single report of so much as a scratch on a human or pet made to Ms. Lord,” Lord’s court motion read.

Lord’s motion also addressed the concerns of the neighbors who leveled the complaints in her direction.

“Lord and Moore understand that neighbors have the right to walk freely without observing groups of large dogs and the several were frightened of them. But their fear while understandable was of no consequence. Nothing of ever happened. There was not even a rose bush knocked over. Had the dogs really been dangerous, it would have been inexcusable to have let this situation go for three years,” she wrote in the motion.

Lord also described the methods animal control personnel used to capture the animals during the two-plus hour process, where the dogs would successfully evade capture with moves Barry Sanders would approve of.

The methods animal control personnel used did not appear to be any different than other incidents where animal control officers were summoned to retrieve an unruly or distressed animal.

The catch pole allows the officer to snare an animal around the neck without endangering themselves or the animal.

Lord asserts that officers waited until news media cameras were turned off when what she believed were cruel methods to remove the animals were employed.

She also said at least two of her dogs were killed and several more are missing following last week’s action — a claim that Kunzi emphatically disputes.

“I am not aware that any animals were killed or abused during the roundup. I am informed, however, that the animals that she claims are missing are missing only because she opened the gates in an attempt to release the animals before they could be seized. Animal Control continues to comb the area and have obtained some of the dogs she released. Ms. Lord suffers from the delusion that there should be no consequences to one’s actions. I disagree,” he said.