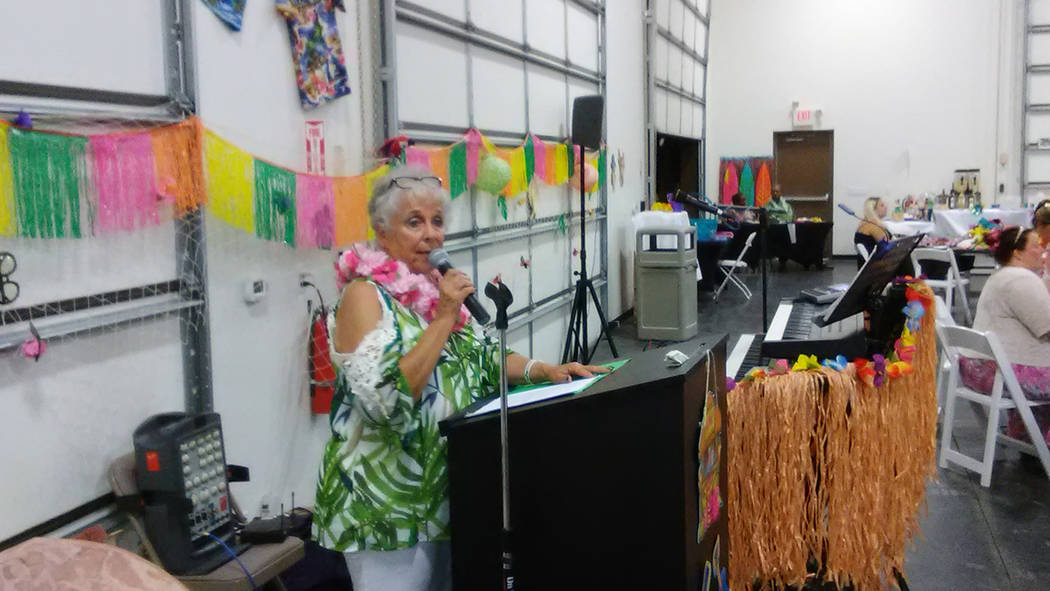 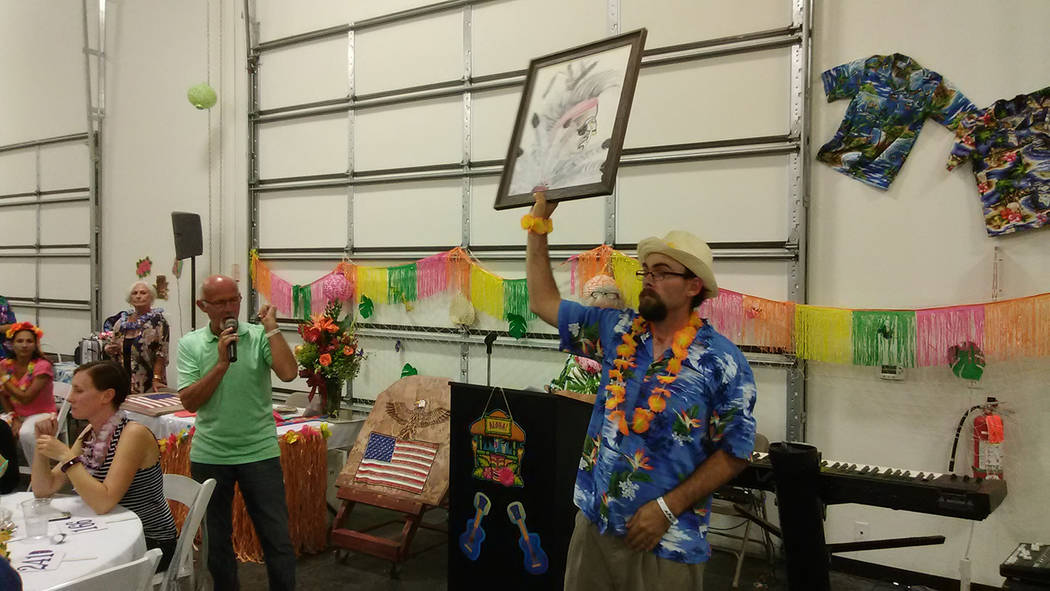 Selwyn Harris/Pahrump Valley Times Auctioneers Ski Censke, left and Ron Gipson take bids during the ever-popular auction at the annual Casa Luau fundraiser. All told, the auction grossed upwards of $17,000 for the program. 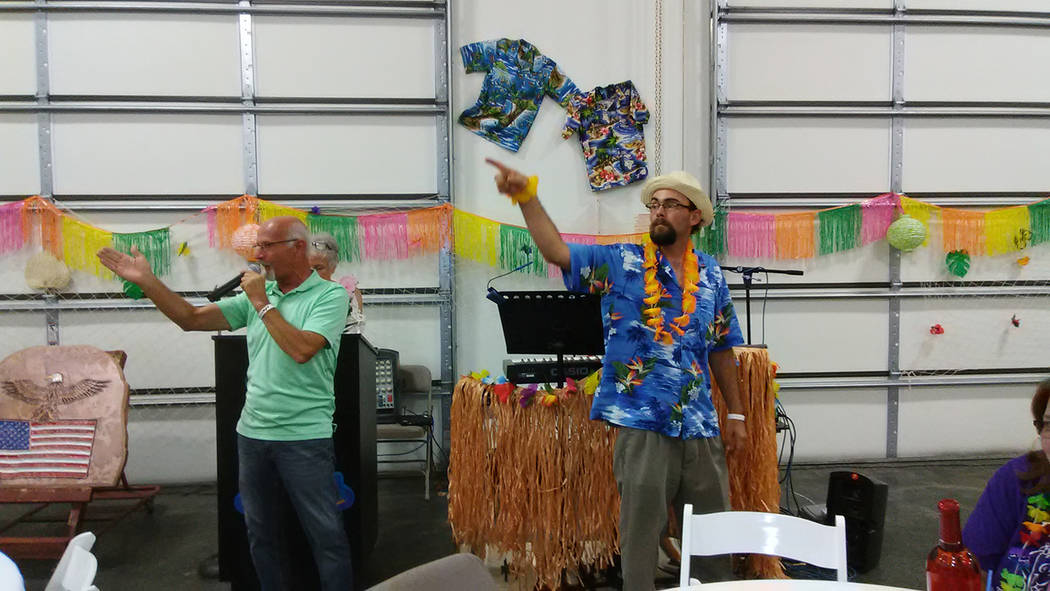 Selwyn Harris/Pahrump Valley Times Auctioneers Ski and Ron solicit bids from audience members. Not only did the duo raise thousands of dollars for the Casa program, they also provided good entertainment and much humor as they engaged the attendees. 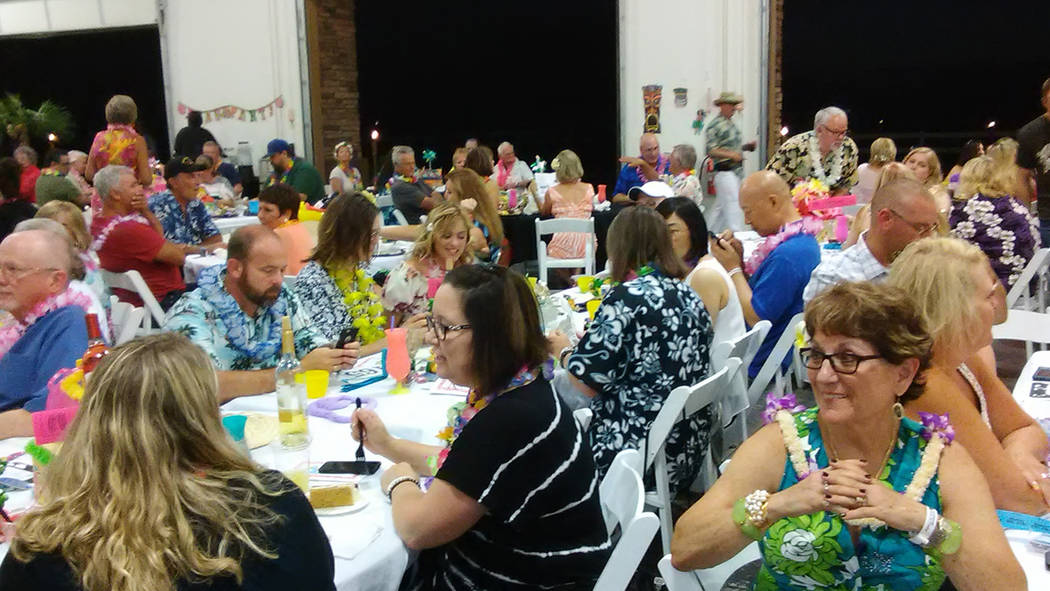 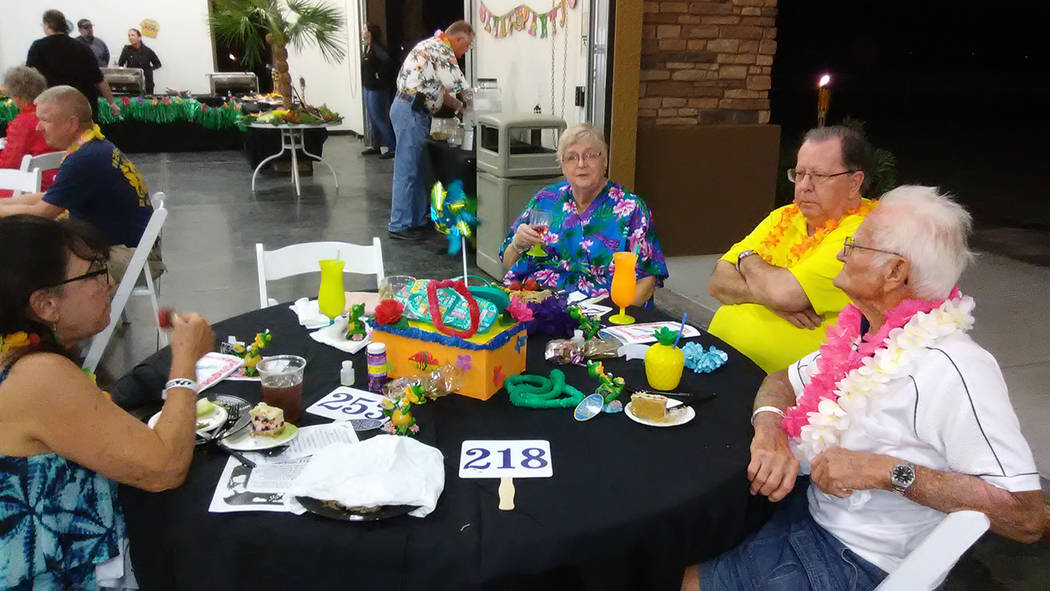 Selwyn Harris/Pahrump Valley Times Casa Luau attendees lounge outdoors prior to the beginning of the auction portion of the program. The spotty weather eventually gave way to sunshine during the event. 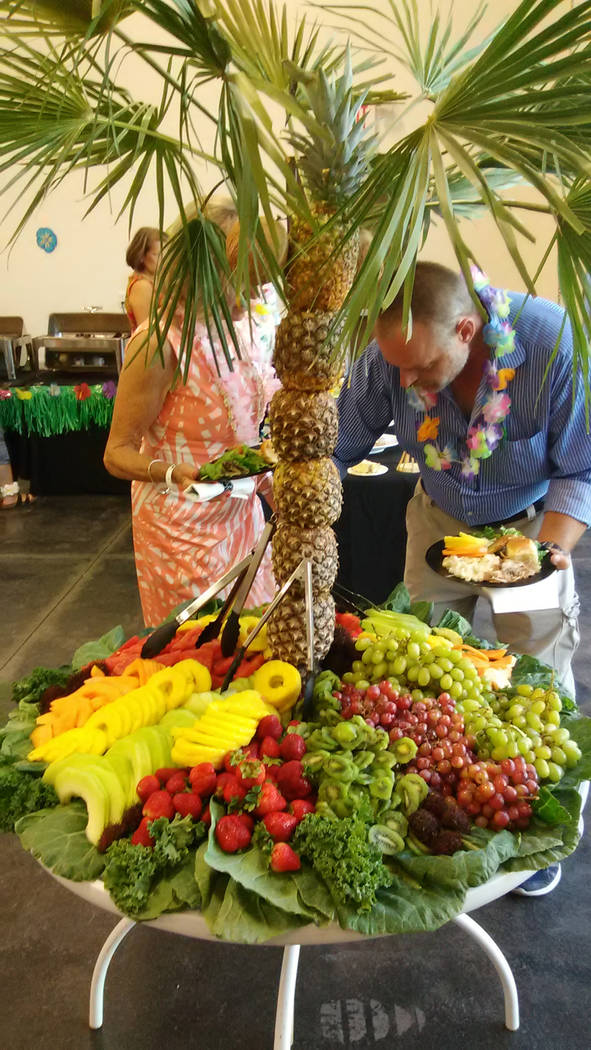 Selwyn Harris/Pahrump Valley Times A tropical creation consisting of assorted fruits was a hit among attendees at the luau.

A program in Pahrump works to fulfill the needs of abused and neglected children throughout the valley.

That program is known as “CASA,” short for Court Appointed Special Advocates.

On Saturday, associates and supporters of the program gathered for the annual CASA Luau fundraiser at Lake Spring Mountain on the far south end of town, where thousands of dollars were raised in support of CASA.

On the menu was a whole roasted pig, with all of the trimmings.

More than 150 attended the event.

Much credit Baer said, goes to Ron Gipson and Ski Censke, who served as the auctioneers during the event.

“The live auction raised about $3,500, while the silent auction raised about $2,500,” Baer noted. “Ski and Ron did a wonderful job. We love them and they are so sincere as well as being so much fun to watch. It really is entertaining, even for those who did not want to bid, but they really enjoyed it.”

Baer also said she hosts just two fundraisers each year for CASA, which are the luau and the popular Crab Fest.

“Those are pretty much the only two fundraisers that we host each year,” she said. “We recently did a local telethon back in May that we have never done before. That raised about $10,000 with that. It was something we planned and put together in about three weeks, so it was a lot less work than putting on a big event.”

Additionally, Baer noted that Saturday’s luau did not go exactly how she originally planned, as Mother Nature had other ideas about how the event would proceed.

The luau was originally to be hosted outdoors.

“I think the luau still went very well, considering we had to be indoors,” she said. “The weather on Saturday was very spotty. The grass area where the tables would normally have gone were still kind of soggy. One of the staff members there said that there was a little bit of mud in the area as well.

“We did have a large room, so there was plenty of space. I figured we’d better be safe than sorry, so I made the call to reorganize the event on Saturday morning. Even though it was sunny on Saturday morning, I spoke to my friend Sherry Swensk, who is a meteorologist on Channel 8 in Las Vegas. Sherry told me that the weather would be very spotty in Pahrump on Saturday. She told me that she wouldn’t take the chance, but obviously, it was up to me.”

Standing up for children

Though CASA has been in existence since the early 1970s, it was just recently implemented in Nye County.

“In beautiful downtown Pahrump, Nevada, we have only been around since 2011, so we are going onto our 7th year come 2018,” Baer said. “During that time, we have recruited, trained, and monitored more than 60 volunteers both here and in Tonopah, because we cover the Fifth Judicial District, which is Nye and Esmeralda counties.

“The CASA volunteers stand up for children in court. They are basically the eyes and ears for the judge. In the courtroom, when a case is being heard, the judge will hear from the defense and prosecuting attorneys as well as CASA. Those three entities will testify in court for the safety of the child.”

Baer also said upward of 99 percent of the children have been abused and neglected, in some form.

“Unfortunately, this is a town with a lot of drug abusers, and many of these parents get into that,” she said. “If a parent is a true addict, they would rather have their drugs than their child, which is very sad. The children end up going into foster care, and we do our best to take care of them. I would say that since 2011, we probably had close to 150 children in the CASA program.”

Baer also spoke about the CASA program during the holiday season each year.

“Another event that we do is every year, which is not a fundraiser, is a special Christmas party for the foster children,” she said. “We have the foster parents and the children as well as their siblings come out and visit with Santa Claus. We give out presents during a nice for evening for the children.”