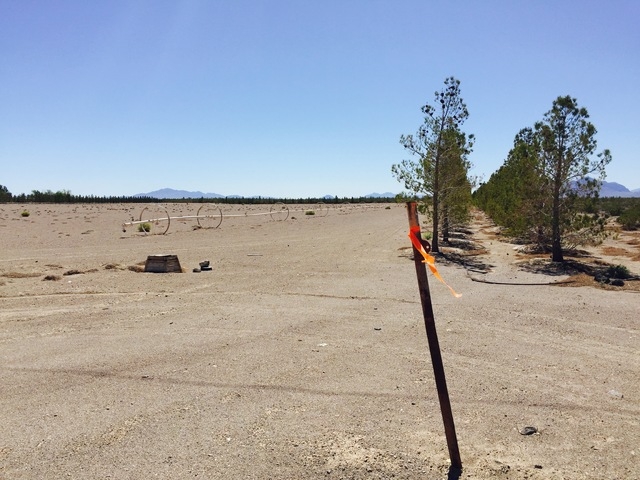 Nye County officials are crying foul over the discovery that Amargosa water was planned to be used to grow marijuana in a Las Vegas cultivation facility.

Nye County Commissioner Lorinda Wichman balked at the news and said that Nye County was misled to believe that the growing would take place on the Amargosa Valley property, which would in turn create numerous jobs and tax revenue for the county.

On March 18, a managing partner of Acres Medical told the Las Vegas City Council that water for their medical marijuana cultivation facility in the city would come from Amargosa in neighboring Nye County, in support of an application for a Clark County cultivation facility.

“We have a large property, 37-and-a-half acres plus or minus up in Nye County with 74 acre feet of water,” Acres Medical managing partner John Mueller told the Las Vegas City Council. Mueller told the council that the plan had been presented in Amargosa Valley and “they’re excited about us being involved with them up there.”

The Amargosa Valley Town Board gave an initial nod of approval to Acres Cultivation, which has the same partners as the Las Vegas company, before a special use permit was granted by the Nye County Board of County Commissioners on July 16, 2014. The commission granted the permit based on an approved water management plan by the Nye County Water District. The water management plan stated that a maximum total of 9,000 to 18,000 gallons per day, or between 3.4 and 6.7 million gallons annually from Basin 230, would be used to grow marijuana.

Amargosa Town Manager Mike Cottingim said there was no discussion at that time of water being used in Clark County. The use of Nye County water to develop a Clark County business is not a “done deal.” According to Cottingim, Acres Cultivation must apply for a point of diversion and change of use permit from the state water engineer. Also, the town would like assurances the planned cultivation facility will be built in Amargosa, not just using the land for its water rights.

Represenatives for Acres Cultivation have called Cottingim asking to come out to the town board’s next meeting April 23 to give another presentation on their plans. The town manager said the medical pot company assured him that they plan to build a cultivation facility in Amargosa as planned.

Jo Ann Kittrell, spokesperson for the Nevada Division of Natural Resources, enforcer of state water law, confirmed that a “place of use” permit is required to transport the water from one basin to another. As of March 31, she said, no such permit request for Basin 230 had been filed with her office.

Though Wichman was not speaking on behalf of the County Commission, she said had the board known the intent was to take the water out of the county to grow marijuana, it is likely the application would not have been approved.

“Someone else would have had the opportunity to pursue one of those licenses,” she said.

Wichman said that Nye County anticipated that there would be “bumps in the road” with the legalities, process and development of the newly approved medical marijuana industry, but this, she said, was not something that the board anticipated.

Amargosa Valley Town Board member John Bosta deemed Acres Cultivation’s original application here as “fraudulent.” Though, he conceded, the property owner has the right to pump a specified amount of water, notwithstanding the cultivation application. Bosta said that neither the town nor the county could tell the property owner how to consume the water.

Nye County has been besieged with water issues in recent months being subjected to scrutiny by the Nevada Department of Natural Resources for over-allocated water rights and fears of a dwindling water supply in the Pahrump Basin.

The Amargosa property located on Anvil Road previously housed a tree farm. In anticipation of using the water to grow marijuana, the trees have been left unwatered and left to die. That is cause for an even greater concern, according to Wichman, that of a fire hazard.

“There are a lot of ramifications if this is not handled properly,” Wichman said.

Acres Cultivation has not yet received approval of a medical marijuana license from Nye County. Approvals must yet be obtained from county planning and the county Sheriff’s Office prior to license application.

A call to Medical Acres and Medical Cultivation partner Paris Balaouras was not returned by press time.