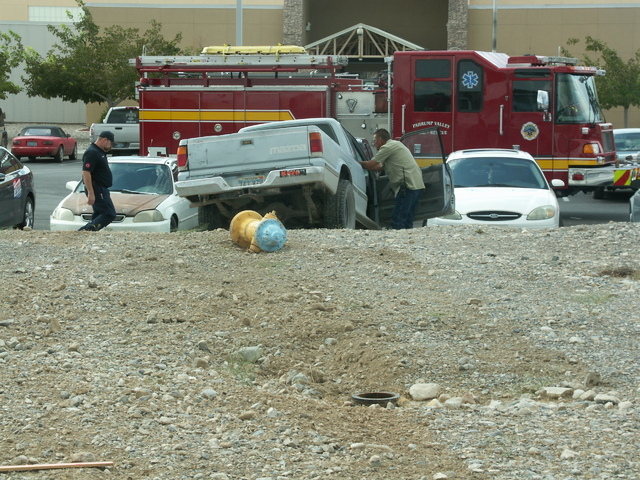 Though it’s always better for law enforcement to chase down suspected criminals, one local resident said she just reacted when her pickup truck was stolen from her yard Monday afternoon.

The woman, who chose to remain anonymous, hopped into her second vehicle and followed the suspect until he lost control of the truck and crashed it.

Fortunately, police did not have to go far to investigate: The suspect wrecked the truck at the Nye County Sheriff’s Office.

Nye County District Attorney Brian Kunzi was the first to contact police after hearing the crash from his office. The suspect driver struck a curb, bowled over a fire hydrant and ended up a few inches from several vehicles parked in the courthouse parking lot.

The resident, who lives less than a mile from the sheriff’s office, said she told the suspect not to leave the scene in the wake of the accident just after 4 p.m.

“He actually stopped and that’s when I told him to turn himself in. I said ‘you’d be doing yourself a favor because the police station is right here, let’s just go check in.’ He didn’t say anything and he just ran off,” she said.

The woman said she’s not sure how the man gained access to her property because it’s entirely fenced in.

“He drove the truck right over the fence to get out, so he already did more damage right there. He had very short strawberry blond hair and very nervous. He’s probably almost six feet with a thin build. He also had a dark jacket that he was trying to put on when he ran,” she said.

The family had a dog until just recently.

The woman said had their pet not died, they would have been alerted to anyone prowling around their property.

“Our German Shepherd passed away from cancer. Had he been home, the guy would never have gotten into our yard. We’ve been talking about getting another one but we haven’t done it yet. I go to the animal shelter quite frequently because it’s close to home,” she said.

Once Lewis determined no injuries were sustained, he inspected the fire hydrant that was knocked over by the truck.

The fire chief explained that most fire hydrants have a “breakaway” feature where if hit by a car, a geyser of water will not shoot up like in the past.

“This hydrant did exactly what it was supposed to do. It sheared off, the hydrant is laying over there and the plunger is still in place. It’s not like what we normally see in movies when a car takes out a hydrant and water comes shooting up. Sometimes it can happen if it’s hit the wrong way. This hydrant is also known as a ‘dry barrel,’ so it’s also designed to prevent the water from freezing during the winter,” Lewis said.

Authorities are still looking for the suspect who fled into the desert south of Basin Avenue.