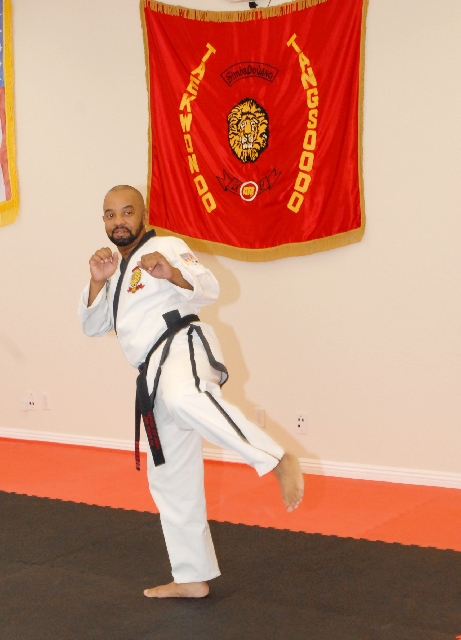 People invest themselves in martial arts. Some participate to gain physical strength and balance. Some take classes for the self-defense aspect of it and some adopt the art as a way of life.

Such is the case of Cali Stegall, Mr. Stegall to you, who has opened Simba Dojang at 1440 E. Calvada Blvd., Suite 1200. Stegall teaches Korean Tae Kwon Do.

“I started learning Tae Kwon Do when I was 3 years old,” Stegall said. “It teaches self-discipline. It is a lifetime quest for knowledge.”

Stegall said his parents enrolled him in classes and he took them off and on until he was 14. “All of my siblings had to take turns taking classes,” he said.

Stegall said discipline is the most important facet of Tae Kwon Do. “It helps with self-control and anger management. It also helps with focus when it comes to school.

“Students learn how to listen in class and they can sit and complete homework. In sports the classes help with strength and endurance.”

Stegall has taught the martial arts in Wichita, Kan., where he had his own school from 1990 to 2006. He has also taught in several facilities in Las Vegas, but said he didn’t like the political focus of the management and jumped at the opportunity to open his own studio here.

“My concern is to teach the art — not how many members I can attract to someone else’s gym.”

Having opened his studio Simba Dojang here in February of this year, Stegall is offering classes to age groups 6-12, 13 to adult.

The two-hour classes begin at 6 p.m. The schedule is as follows:

• Tuesdays and Thursdays, ages 13 to adult.

Stegall is currently taking registration for what he calls “Summer Boot Camp.”

“It will give the kids some structure,” Stegall said. “We will have an exercise program and presentations, but we’ll also have some fun, too.”

He said daytime outings to the park or to go bowling are on the agenda. Simba Dojang will also provide breakfast, lunch and a snack to the children enrolled in the summer boot camp, which runs from July 8 through the end of August.

The cost for the boot camp is $50 per week for students already enrolled in classes and $75 per week for those who are not.

Stegall is married to an Army Sergeant Major and has five grown children, one of whom is currently competing in the CBS television program, “So You Think You Can Dance.”

Stegall’s son goes by “Fik-shun” on the show and is in the top 20, headed to the finals.

Stegall said he rushes home on Monday evenings after classes to see his son compete when the program airs at 8 p.m.