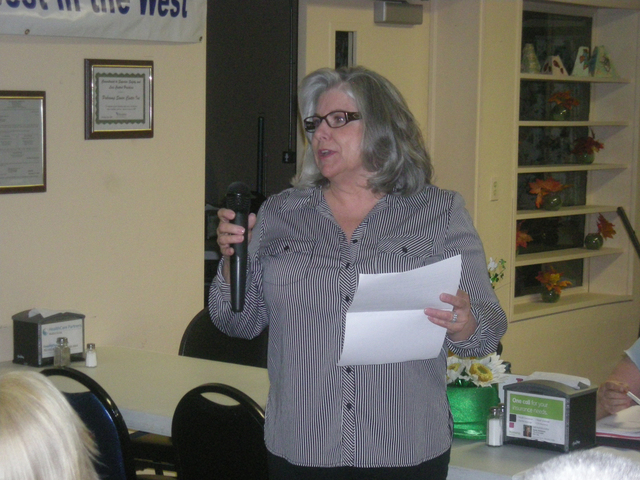 Nye County Assessor Shirley Matson stressed the technological improvements she made to her office and constraints working with a small staff during a campaign speech before a Pahrump Valley Republican Women’s Club monthly meeting at the Pahrump Senior Center Monday night.

But overtones of her first term were just below the surface in some of the comments by her opponents. Matson was found guilty of two ethics violations for failing to avoid conflicts with her personal interests and using government property to benefit herself after a recall was mounted against her in 2012 following a series of e-mails with disparaging remarks about the ethnic background of construction workers at the new county jail.

Matson was prevented from firing two employees by District Attorney Brian Kunzi; Matson accused one employee of taking pay to notarize documents, she wanted a drug test on the other. Last October, FBI agents confiscated two of her computers after allegations of tampering with the county mail.

Matson was unopposed in the 2010 Republican primary. She defeated incumbent Sandra Musselman in the general election 7,984 votes to 6,028 votes, even though Musselman, a Democrat, took the county early retirement buyout after her name was already on the ballot and wanted to withdraw from the race.

At the time of her election, Matson had been a Nevada resident for just three years, with an associate degree equivalency in real estate, a California real estate brokers license and real estate sales person license in Nevada. She was co-owner of a small mortgage brokerage and escrow company in Southern California. She worked on the campaign for San Diego area congressman U.S. Rep. Duncan Hunter in his 2008 presidential bid.

“I am your current Republican assessor. I did not register as a Republican in Nye County because Nye County is a red county. I am one of the rare breed that have been conservative my entire adult life,” Matson said.

“With my technology fund over the last three years I’ve made changes to the assessor’s office as well as worked with officials to assist them with new technology, such as purchasing a new printer and scanner with the treasurer, I have purchased new servers, computers and other upgrades for the county GIS department. I have brought state-of-the-art everything to the county. These were things I did not have to do but I know the county needed these upgrades to be more efficient, productive and over time, save more money,” she said.

During her term, the assessor’s office augmented the system of tax exemptions at the Nevada Division of Motor Vehicles that will allow veterans, the blind, widows and widowers to avoid having to stop at her office first for a voucher, Matson said.

“There are still some bugs to be worked out but eventually they should be able to use the kiosk and on-line service as well,” she said.

“I replaced nearly every piece of electronic equipment in our offices, some 30 and 40 years old. I have upgraded to the new line printer for mailing notices, if any of you remember what you got my first two years of my term as compared to what got sent out last year,” Matson said. “I have been able to accomplish these things even with a smaller staff than Iwould like because of budget constraints.”

With the technology upgrades, Matson said it’s time to turn her attention to verify all property appraisals in Nye County and ensure every citizen gets a fair shake.

“If everyone is made to pay their fair share of taxes, we will have enough revenues for the county to operate on without having a higher tax rate. I strongly support keeping our tax rates as low as possible. I am proud of what I have accomplished and I am looking forward to continuing my goal to having the assessor’s office working more efficiently,” she said.

Matson fielded a few questions about why it takes so long to change deeds at the assessor’s office. Matson said her office was behind when she took office, adding there are only one or two people who can do the deeds at this time. She referred to her promotion of employees to deputy assessor positions allowing them to do more duties, which was approved by county commissioners by a 3-2 vote in November 2011. Three employees in her office took the early retirement buyout in 2010, followed by the resignation of Deputy Assessor Robin Rivero.

“You’ve probably seen me at some of the commission meetings asking for staff. I don’t get the staff and I had several people gone for extended periods of time,” Matson said.

Assessor candidate Leonardo Blundo said he stresses three things in his campaign: bringing integrity to the assessor’s office, efficiency — he wants to streamline staff to save taxpayer dollars — and transparency, with an open door policy.

An assessor’s office employee in Virginia Beach, Va. for 31 years, candidate Richard Marshall said, “I’ve noticed a little bit of controversies in the last couple years in the office, I’d like to try to alleviate that. I think the citizens of Nye County deserve a better operation.”

Personal property appraiser/collections clerk Sheree Stringer, a Pahrump resident for 38 years with 10 years in the assessor’s office, confidently predicted, “I am going to be your next Nye County assessor.”

“What I want to see happen in the assessor’s office is we need a change in leadership. The leadership has not been there. I want to make the assessor’s office accessible to everyone. I want you to feel like you can come in and find out what your assessment is. There isn’t any reason for you to be scared, it doesn’t matter what your race is, what your creed is, what your sex is. It doesn’t make a difference to us. The door is always open,” she said.