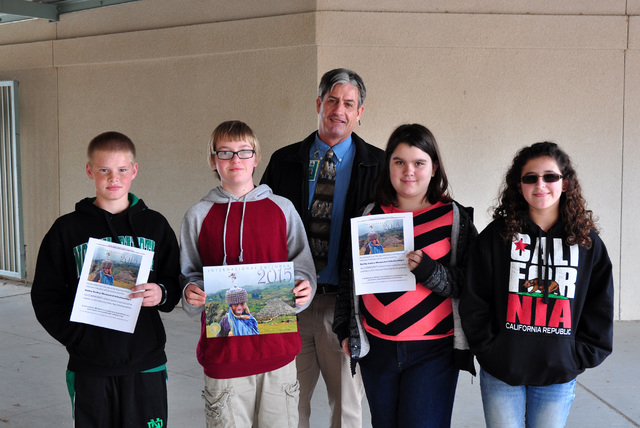 A new scholarship for $500 will be made available in the spring for Pahrump Valley High School students to honor Kathy Hofer Galey.

Galey was a dedicated counselor at the middle school, who passed away in November from cancer. She had worked in Nye County School District for 25 years.

Galey was known in the community for having a huge heart as one anonymous staff member of the middle school remembered her on a comment wall for her memorial.

“She helped my family with Christmas last year. She purchased presents for my children and told them the presents were from Santa. The joy and excitement in the faces of my children brightened Kathy’s day. She will be missed, but never forgotten.”

Rob Nielson, a Rosemary Clarke Middle School seventh grade geography teacher, said he was inspired by Galey’s life to establish the scholarship for the kids.

“I did it because she worked here for over 20 years and touched so many lives,” he said. “She did a lot for the students behind the scenes for the community and for the kids. I just wanted to see if we could get a scholarship in her name.”

The scholarship will be offered to students who excel in community service. According to Nielson, the students will be asked to write an essay on their community service project and a board will decide who gets the money, which will be given out at the end of the school year.

Nielson believes that Galey would approve of the community service aspect because she was so involved in the community trying to make it a better place for all of us to live in. At the moment, everything is at the ground level and the group is just getting started selling the calendars. Nielson hopes the scholarship will be up and running by the end of this year.

To raise money for the scholarship Neilson and a group of his students will be selling International Peace Corps 2015 calendars. The calendars were donated by a group in Madison, Wisconsin. Nielson said all the proceeds will be donated to the scholarship fund.

At the moment, the teacher said he has just a small group of student volunteers from his geography class selling the calendars.

The group consists of all seventh graders: McKayla Bartley, Christina Boot, Grant Odegard and Koby Lindberg. The four students all want to help Nielson sell the calendars and believe that Galey was a great counselor.

Boot said she is doing this because she remembers Galey fondly.

“I am doing this because it’s for a good cause and she had counseled me a couple times last year,” Boot said.

Odegard said, “Our teacher had asked the class for help and I wanted to help out. I know I can sell the calendars.”

Those wishing to donate money to the fund can contact Nielson at rnielson@nye.k12.nv.us the school or buy a calendar from one of his students.