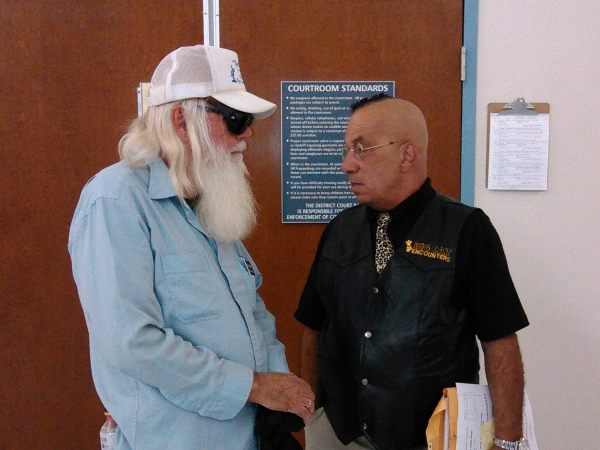 Karl Mitchell has been given a 60-day extension last week to remove 10 tigers from his Big Cat Encounter facility.

If the tigers are not removed by the time both men return to court in November, they face contempt of court charges, punishable by up to 25 days in jail and a fine.

“I tried to find locations where I’d be able to move the animals one or two at a time,” said Mitchell, owner of Big Cat Encounters. “I’ve made contact with individuals out of state to try and do the same thing that I am dreading doing, which is to destroy the animals or have to euthanize them in order to move them somehow.”

Remaining optimistic, Mielzynski said he believes all is not lost in the case, which has gone on for five year, as he spoke about alternatives – one of which is to get the property rezoned.

“I have spoken to two county commissioners who said they were going to get together and put it on the October 6th commissioner agenda to either do away with the Regional Planning Commission, or remove this one property from the planning commission, due to the consequences if they did not.”

He was a combat veteran during the Vietnam conflict and said he suffers from Post-Traumatic Stress Disorder.

The tigers, he said, provide emotional support for his condition.

“These tigers represent a side of spirituality to me which was masked during my time in service to my country,” he said. “There are many such individuals diagnosed with PTSD and the mental health professionals have discovered that in my case, the tigers are my family members and should not be removed for any reason at this time. Lastly, your honor, there has been no criminal activity or acts of negligence nor escapes causing any damage to the community in this matter.”

Additionally, Mitchell, who is black, also said he’s being targeted solely because of his race. “People need to understand that there are four other facilities in town that are not required to have conditional use permits,” he said. “There’s one facility a mile from where I am and they have big cats, but they are not required to have a conditional use permit.”

One glimmer of hope for Mitchell was quickly dashed during the hearing.

Earlier this month, Mitchell filed a request for an emergency injunction which if granted, would allow the animals to remain on the property.

United States District Judge Andrew P. Gordon denied the motion on the grounds that Mitchell did not comply with local rules for filing emergency motions, which include the filing be accompanied by an affidavit setting forth, among other things, the office address and telephone numbers of all affected parties, and a statement certifying that after personal consultation and sincere effort to do so, the moving party has been unable to resolve the matter without court intervention.

“That would be grounds to deny requested relief, however, given that Mitchell is acting pro se I would consider his motion for emergency relief despite his failure to comply with the local rules,” Gordon’s denial order stated. “Federal courts may not intervene in ongoing state proceedings under the abstention doctrine.”

Mielzynski, meanwhile, shared his concerns on the potential fallout from having the tigers forcibly removed from his property.

“If the county commissioners do not do away with the RPC, the judge said the tigers have to be off the property,” he said. “I don’t know what’s going to happen. It’s probably going to be a total mess because it’s probably going to go nationwide. The filmmaker, Morgan Spurlock, said if something happens they’re going to come and profile it, so you might see a whole catastrophe in town as far as cameras and film crews. I don’t need any of that on my property.”

Mielzynski also said it was a single anonymous complaint that stirred up the entire issue.

“When the commissioners approved this back in 2007, they made it complaint-driven, which means you can have the cats and other large animals as long as nobody complains, so you won’t need a conditional use permit,” he said. “There are four other big cat places here that do not have this conditional use permit because nobody complained about them.”