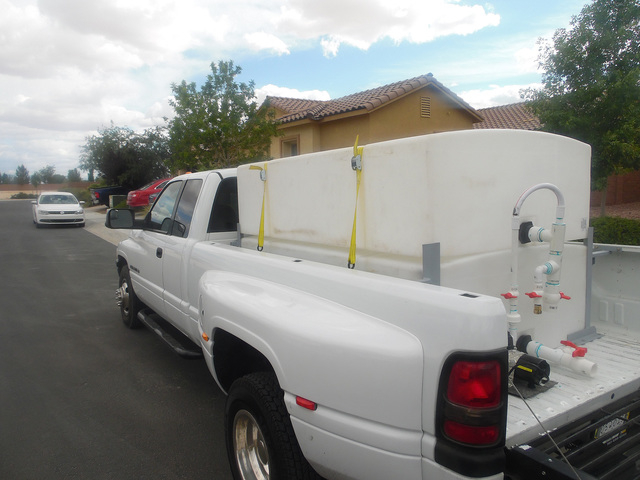 A local a disabled vet has a plan to help area homeless veterans who have nowhere to keep up their personal hygiene.

John Walker was at the Nye County Board of County Commissioners meeting earlier this month in search of a letter of recommendation from the group for his proposed showers on wheels idea. Walker got that recommendation, with four commissioners giving him their endorsement to attempt to obtain funding for his cause.

Walker has noticed that homeless vets in the area have access to food and clothing, and noted that ways to clean themselves are few and far between.

“I am a firm believer that having a fresh shower can change a person’s outlook on life and encourage them to have a positive attitude and also bring up their day a bit,” Walker said in his mission statement. “I feel like a fresh shower gives you a chance to ‘wash away’ problems you’re experiencing and provide you with a new start.”

Walker’s dream is about to turn into a reality, as he said he will be operational in a week or two with his current setup that can shower one person at a time, via two, 300-gallon tanks on the back of a Dodge Ram 3500. A tent-like tarp will be on the back of the truck to give the user some privacy during their shower.

His long-term plan is to obtain a Jayco Seneca 37-foot Bunkhouse and Alpha Mobile Solutions mobile shower unit. The Bunkhouse could hold up to nine people and the shower unit can be utilized by eight people at a time.

He would visit locations once a week, offering the homeless vets in the area a chance to utilize his services on a regular basis.

In addition, Walker hopes that major corporations will donate trial size toiletries to him, to make sure the vets who will utilize his service have the proper supplies.

Listening to the man upstairs, Walker said the idea came to him one day and felt that if that’s what the Lord wants, then it should be a possibility.

“It was something that God put in my spirit,” he said. “I really believe that if he told me to do something, that the funding is going to be there.”

Walker wants to start out at the local level, and eventually travel around with his shower unit starting with Las Vegas, then at a national level aiming to lend his services with the Federal Emergency Management Agency when natural disasters occur.

Networking with Grandpa’s BBQ, Joy Divine Ministries, and Saved by Grace church, Walker has a few people ready to help him pursue his goal.

Although he will be donating this service Walker was clear he hopes to use this mobile shower project to better the lives of the homeless vets, not just give them a shower for a day. “I want to use this to give them a hand up, not a hand out,” he said.