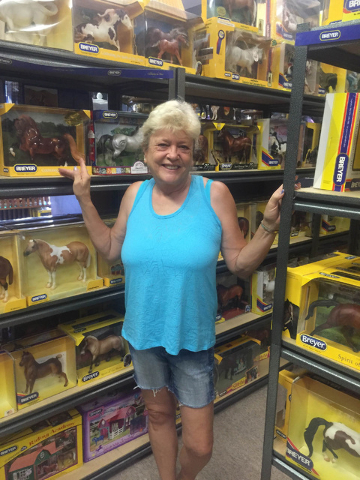 After selling miniature model horses for the last 17 years online, a local business woman got the urge to open her first actual store when she moved to the valley.

Laurie Zielinski, who moved to Pahrump a year ago from Fallon after experiencing health issues, wanted to display her expansive miniature model horse collection in person, so she opened up Nevada Sundown Stables.

“I’ve had this business going since 1998 and I got tired of working for other people and this was a hobby,” Zielinski said. “I found out I could make money off this by opening up an eBay store, so I have been open a long time but never had an actual storefront.

“My garage was full, so I thought this is what I wanted to do for some time was make an actual store where I could have traffic come in and knew the amount of horses that I actually have.”

Running an actual store as opposed to an online store has its differences, and Zielinski found one to be the biggest issue over the others.

There are several hundreds of items in stock at the store, with miniature horses being the main seller, but other merchandise is available too.

“Mostly model horses. That is the biggest theme of my store,” Zielinski said. “Bryer (brand), those are mostly plastic model horses; very collectible. They come in sizes or four inches high to nine inches high.”

Nevada Sundown Stables has a number of rare and porcelain horses, in addition to southwest and Native American items as well.

The prices vary depending on type and how collectible the item is, as some horses go for far more than others.

The most money Zielinski has sold a piece for was $1,500, and she thought she may have sold that for less than it was worth.

To obtain some of those rare, more sought after horses, Zielinski makes an annual trek to Kentucky to a popular convention.

“I go to Breyer Fest every year in the middle of July, which is a huge convention of Breyer collectors, “50,000 to 60,000 people converge on there, ” she said. “It takes place where the Kentucky Derby is ran.

“They make special items every year specifically for Breyer Fest that are highly collectible.”

The special edition items go on sale as soon as buyers leave the fest and fetch upwards of $5,000 online.

One thing Zielinski was not used to while running the online business, which she still operates, was piecing together her items for sale.

“I have an incredible amount of inventory and trying to get that loaded and online I don’t have to worry about that,” she said. “Online it’s all priced in the ad and I just take it off the shelf when it sells, in the store they need to be priced.”

The main clientele for Nevada Sundown Stables are women, with ages between 12 years old and 20 years old being the most frequent buyers.

Although the business is in its infancy, Zielinski has plans for the store if sales take off as she hopes.

“In the back of my head, if this takes off and does well I plan to expand it,” she said. “To include more collectibles, more arts and even more kinds of animals.”