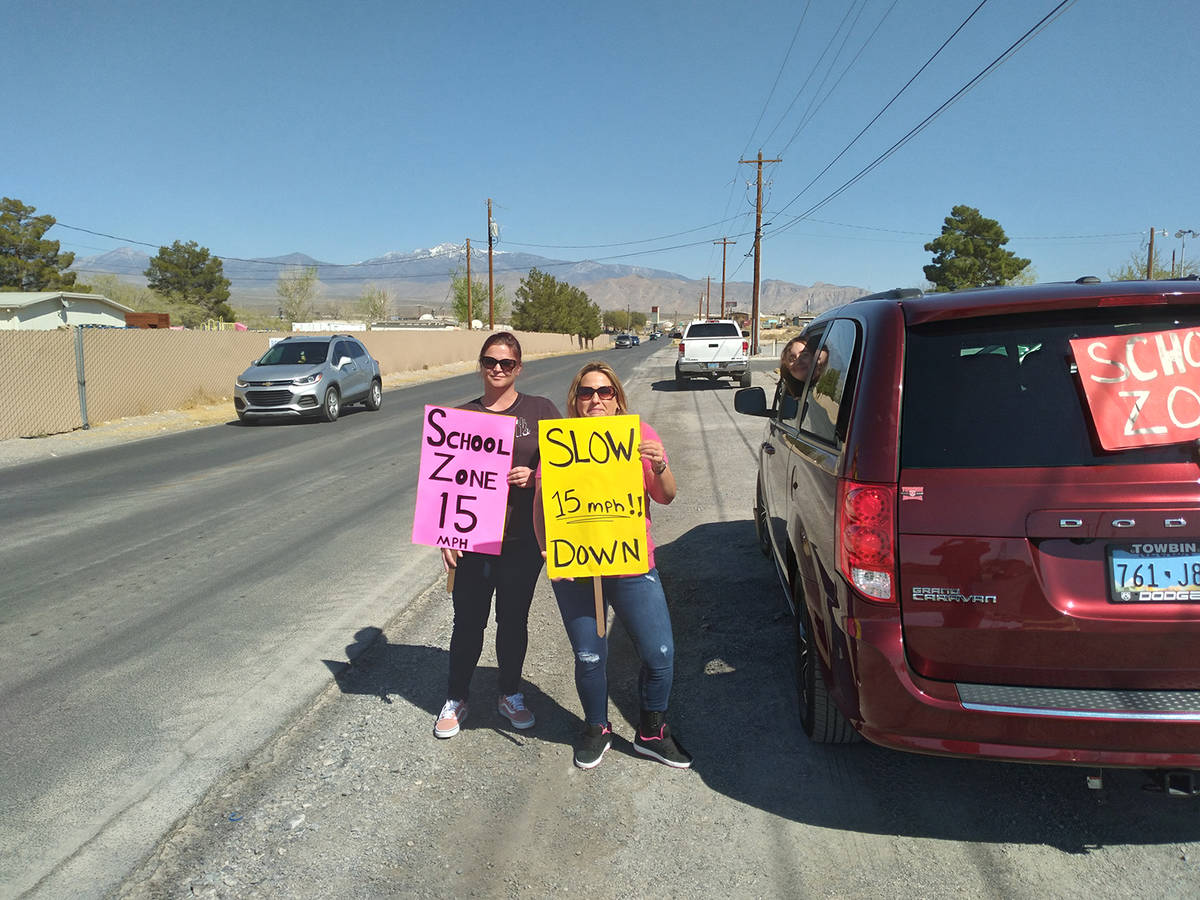 Last week, Sarah Barentine and Lynn Olds were posted directly in front of the school with handmade signs reminding motorists to slow down as they drive past the school, where the speed limit is 15 miles per hour.

At present, Barentine has two youngsters who attend the school, with one more coming up in the fall.

In for the long haul

Both said they want to continue their efforts throughout the school year.

“I’m out here because we’ve got a school here and even though we have posted speed limit signs at either end of Wilson Road, people still fly through here,” the six-year Pahrump resident said. “I’ve had people stop and say they didn’t realize that it was still a school zone, so I made up some signs and stood out here and it seems to be working out well. I’m not able to do this in the morning, so I’m here in the afternoon when I pick up my kids. I come a little early and just stand out here. We have been doing this for about three weeks.”

When speaking about the reaction she gets from drivers, Barentine said it varies.

“I’ve gotten some honks and I’ve gotten some waves and I even got a few birds,” she said with a laugh. “But for the most part, people say thank you, and I know that some of the parents here have been appreciative of what we’re doing.”

Barentine’s companion in front of the school was Lynn Olds, who also has a daughter attending the academy.

Olds herself graduated from Community Christian Academy back in the day, as her preschool picture still adorns a wall inside the building.

“She has been here for seven years,” Olds said of her daughter. “Drivers speeding by here have always been a problem and we do see the sheriff’s deputies do what they can, when they can, but they can’t be here all of the time. The drivers for the most part, do respect us when they see our signs.”

Seems to be working

Olds also said that her and Barentine’s efforts appear to be making a difference.

“When we weren’t doing this and the sheriff’s department would be patrolling through, we have seen many, many traffic stops,” she said. “If we knew that sheriff’s deputies were going to have a day patrolling here as they do at other school zones, we would probably take the day off and let them give out lots of tickets.”

Barentine meanwhile, said she would like to see more sheriff’s office deputies patrolling not just school zones, but all over town if possible.

“I think the issue is that we’ve expanded so quickly in such a short amount of time, that we don’t have all the officers that we need to support our community,” she said. “Probably getting more officers would be very beneficial. I also think it would be nice to have one of those radar trailers, as well as having more speed limit signs closer to our schools.”

It should also be noted that the Nye County Sheriff’s Office Auxiliary units routinely set up the radar trailers which display a vehicle’s rate of speed, daily throughout all parts of town and near school zones.