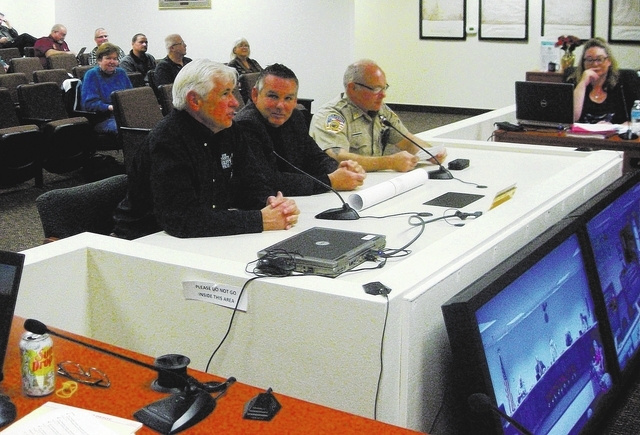 Nye County Sheriff Tony DeMeo didn’t get an early Christmas present with the approval of a $401,600 simulated training facility, as county commissioners Tuesday poked more holes in the proposed contract than a well-worn target.

But they liked the concept anyway.

Commissioner Lorinda Wichman thought sheriff’s deputies would use actual live ammunition, but DeMeo said it would use paint balls to simulate real-world situations, such as a school shooting in a 4,200 square-foot building that had removable panels. Wichman wanted more liability protection for the county adding, “when I learned how to shoot, my bullets didn’t go where they should always.”

“This building is not for live fire. This building uses simunitions, (simulated ammunition)” the sheriff said. “Paintball is paintball. The worse thing that may happen is you’ll get a bruise.”

Assistant Sheriff Rick Marshall said the building will be constructed using impact fee money. The sheriff’s department collects $93 from the building of each residence. The sheriff’s department has an estimated $465,000 from the impact fees since passage of the impact fee ordinance in 2005. Marshall said they have to spend it within five years of collection, which Nye County Principal Planner Steve Osborne said expires next year.

Impact fee money can only be spent on construction, Comptroller Susan Paprocki said.

“We’re looking at what we can do with this money that would be of benefit to the Nye County Sheriff’s Department and emergency response as well. We’re not going to be able to build a police facility with $400,000,” DeMeo said.

He said the facility would keep his officers current in training for environments they might face.

Marshall said the facility could also be used for firefighters and emergency service personnel, too.

“We can actually set up three separate scenarios at one time. We can make it into a bank, convenience store, several residences,” DeMeo said.

The building would be set up at the 40-acre multi-purpose training facility at 2871 E. Mesquite Rd.

“We’ve all had concerns about active shooters in school situations. This will give police departments the ability to prepare for that,” said Alan Schrimpf, business consultant for Action Target.

Schrimpf said he has a contractor’s license with the Las Vegas firm Kittrell Jensen Contractors and is also a Nye County reserve deputy sheriff.

Wichman said the county would be on the hook for other costs in the contract, like site preparation, installing power, providing structural engineering, obtaining permits and supervising job site safety. She feared there would be change orders later, adding costs.

Commissioner Donna Cox concurred. ”I don’t want to get into something finding you’re having big overruns then we have to allocate $1 million.”

Schrimpf pledged: ”This project is not going to go over $1 from what I bid it.”

When the multi-purpose training facility on county land was first proposed by former Commissioner Gary Hollis, it came completely out of the blue with no advance discussion; commissioners approved $290,000 for it without any comment.

Ironically, while the sheriff’s department is using existing impact fee money to construct it, DeMeo wanted approval of the project before Jan. 1, when the county will have to pay impact fees to construct it.

Commissioner Dan Schinhofen was unable to get a second on his motion to approve the contract. A corrected contract is expected to better spell out fees. The final price tag for the project will be $450,000.