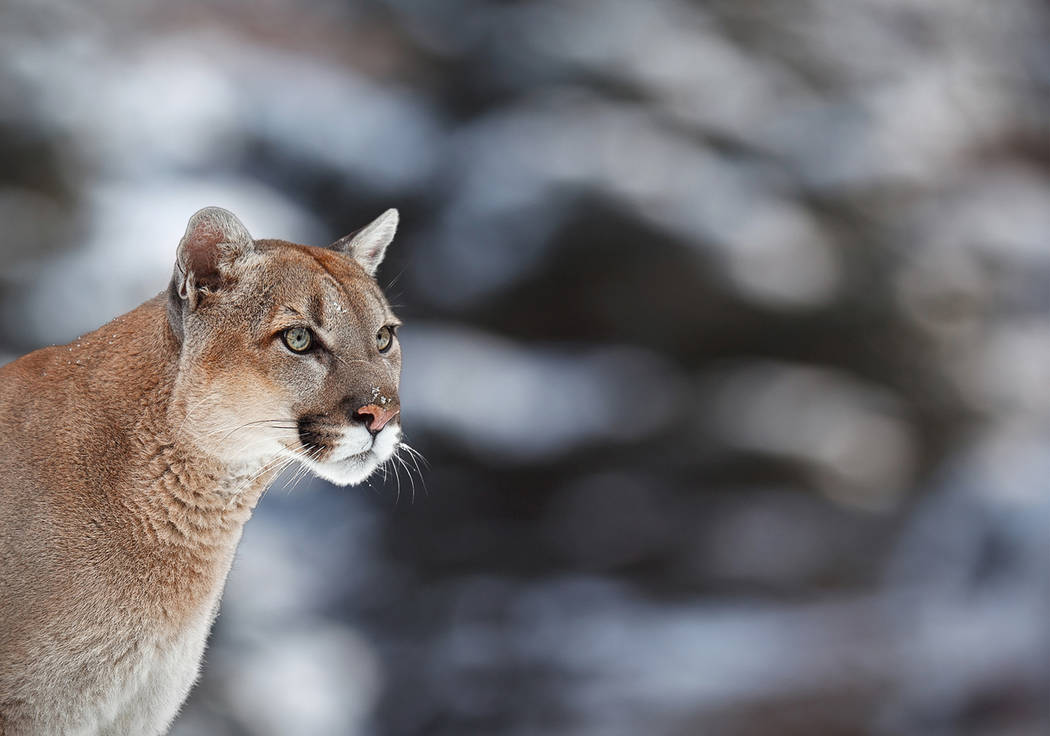 Thinkstock This file photo shows a mountain lion pose on a fallen tree. Nye County Animal Control Officer Levi Gregory said mountain lion sightings have been fairly common in the Pahrump Valley for the better part of a decade.

Nye County Animal Control Officer Levi Gregory said mountain lion sightings have been fairly common in the Pahrump Valley for the better part of a decade.

“Our area is a pretty common habitat for mountain lions, and we have a big male that lives on this side of the fan that routinely comes into the valley,” he said. “We also have two females that we know of who live on the southwest end of the valley.

“They are solitary animals and they only get together for mating season, which is every couple of years when those two females go into heat,” Gregory said. “The big male will come down and try to mate with the females. They have a 150-mile range that they roam. Though they are very solitary animals, they are constantly on the move.”

Gregory also said the two females spotted in the area have not yet displayed aggressive behavior.

“They are pretty mellow, but they have been known to go to horse corrals to drink. Since one of them got kicked in the face by a horse a while back, she tries to stay away from the horses, so it seems that she has learned.”

Additionally, Gregory noted there have not been any reports of the mountain lions attacking humans.

“I have not heard of that, but it is always assumed that livestock and pets are common victims of the mountain lions,” he said. “We do know that one of the mountain lions who had a cub jumped a fence property, grabbed a chicken and jumped right back out. That sort of thing has happened around here for years.”

As many local residents enjoy spending time outdoors, Gregory had a bit of advice for anyone who encounters a mountain lion while out on a walk in the desert.

“The best thing you want to do is to keep an eye on it and walk backwards from it,” he said. “A few years ago we had a mountain lion around the old Manse Elementary School by Walmart. We stood just a few yards from it and it did nothing but stand there and stare back at us. It did not budge one inch.”

Gregory said it was eventually determined that the mountain lion was a cub that was left alone by its mother.

“We don’t know how it ended up there but we do know that someone was feeding feral cats and the mountain lion decided it wanted in on the deal,” he said. “Bottom line, if you’re out on a walk and you encounter a mountain lion the best thing to do is just walk away from it.

“You do not want to turn and run,” Gregory said. “At the very least, you can call animal control to send a vehicle by to see if it’s still in that area. More than likely, the second you lose track of that cat, it is gone. They don’t normally stick around for second looks on most occasions.”

In January 2016, officials from the Nevada Department of Wildlife gave the directive to dispatch a rogue mountain lion who was feeding on pet cats in the area.

At the time, Nye County Animal Control Officer Susan Ryhall, who was at the scene, said a state game warden was summoned to the location at West and Long streets.

She noted that after evaluating the animal’s behavior, the game warden said the cat could not be tranquilized and re-released to a remote location.

“The warden made the decision that the animal would not, under any circumstances, be a candidate for relocation because it had lost its fear of humans.”

Additionally, Ryhall said there was plenty of evidence to determine someone in the neighborhood was feeding the mountain lion.

“There were food bowls located inside of her den after she was dispatched,” Ryhall said. “There is no question somebody was feeding the cat, which is probably why she lost her fear of human beings.”

Aside from getting fed by humans, the cat, according to Ryhall was adept at getting its own food at the location.

It’s unknown how long the mountain lion took up residence in the heart of the community.

“There was a fresh kill at the site,” she said. “She had a house cat that she had just killed and buried under some twigs. The cat was still wet with saliva and that’s how fresh the kill was. She still had blood on her mouth from killing the cat. All of the officials onsite deliberated for quite some time on how they could safely remove the cat. It seems that we get calls on them every year. We like to keep track of where they go and how they move.”