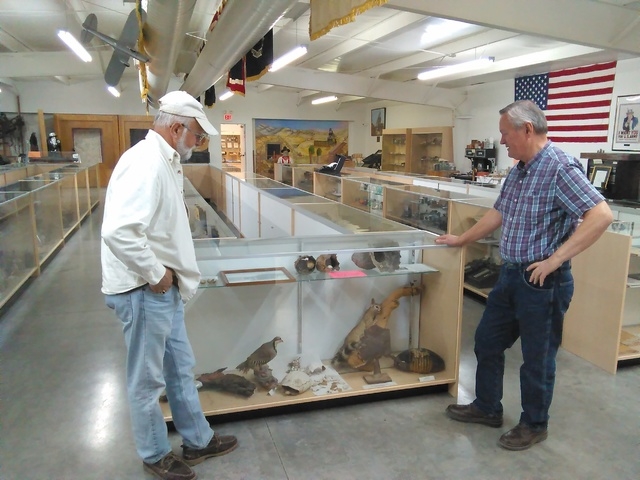 New Pahrump Valley Museum and Historical Society board President Michael Voegele is reminding community residents and visitors that the museum is not closing down anytime time soon.

Voegele was named board president early this year after previous president Gary Hollis stepped down.

For the past eight years, Voegele, who has been associated with the museum in various capacities, said he’s working to draw more interest in the facility, which essentially tells the history of Pahrump and other areas of southern Nevada.

He noted the museum regularly fields questions from those who believe the facility is shutting its doors due to pending cuts by Nye County.

“We are not only not closing, we are doing everything we can to expand the museum,” he said. “We have some initiatives that we think are going to be successful to help us. The problem stems from the county’s financial issues.”

Late last year the county was facing a $3 million budget shortfall. While many services were cut, the subsidy to the museum was spared. However, the new budget season brings renewed discussion of cuts, including the museum funding, as the county faces a new $2.4 million shortfall.

Voegele said he was concerned about the county possibly eliminating funds for the Pahrump and Tonopah museums to help shore up their budget.

“My understanding is that county management was looking at the funds that fund the museums as being a source of additional money that they could use,” he said. “I suppose the commissioners have every bit of authority to take that away. That money could be used to offset some of the county’s financial issues. But that’s way above my pay grade to determine that.”

As a senior scientist on the Yucca Mountain project, Voegele was part of a team of scientists and engineers who wrote the license application demonstrating the proposed radioactive waste storage facility could be done safely.

He noted that Yucca Mountain could play a key role in the museum’s future as a funding source.

“Nye County has always been upfront with Congress that if this can be done safely, and all that we ask is that they complete the licensing application review,” he said. “If it can be done safely, we are willing to work with it. We are interested in the benefits to the museum. The benefits to the county could be new roads or land. There is almost no limit to what the benefits are out there for the county if the program goes forward.”

Additionally, Voegele played a large role in establishing a Yucca Mountain exhibit and information center at the museum, which has been a popular feature to visitors.

Yucca Mountain aside, Voegele also said both the communities of Pahrump and Tonopah need their museums for the preservation of their respective histories.

“From my perspective, this is your museum,” he said. “This is the opportunity for Pahrump and Nye County to show the world what was here and the same thing is true up in Tonopah. There is so much history in Nye County that needs to be told and there are dedicated groups here and in Tonopah who are trying to keep that information alive.”

Voegele’s assertion was not lost on Max Shipler.

The six-year Pahrump resident, along with his cousin from out of state, stopped by the museum last week.

“I love museums anyway, and this museum is wonderful,” he said. “My cousin and his wife are here from Missouri and they love history and antiques so we wanted to show them around, plus I wanted to show him the Yucca Mountain exhibit. Any way we can preserve history, it is to our advantage and that includes all of us. It’s incredible what we can learn today by looking at the past. I’ve been here before but it’s been a few years. I also like the museums in Tonopah and Beatty.”

Museum Director Marilyn Davis said she’s noticed an increase in visitors at the site, especially those from out of state.

“Right now we are running at about 25 visitors a day,” she said. “Last year we had over 7,000 people from every state but Mississippi. We regularly have visitors from around the world including Canada, Asia and Europe.”

“She’s planning to move here and she told me she’s definitely going to be a volunteer,” she said. “She bought some items and she’s a member of the museum but she’s a Yerington resident.”

Voegele meanwhile said the board is working on modernizing the museum to help make the facility a ‘showpiece’ for Nye County.

He also noted that he believes a Nye County resident should represent the museum as board president, as he is a Las Vegas resident.

“Having Marilyn in place as the director and employee has been a big plus for the museum,” he said. “She’s also on the board of directors and that’s a big deal. I am willing to drive from Las Vegas to Pahrump every once in awhile. It would also be nice for more people to step up and work on the board. We can use all the help we can get, especially volunteers.”

The Pahrump Valley Museum and Historical Society is located at 401 E. Basin Ave. Business hours are 9 a.m. to 5 p.m. Tuesday through Friday. For additional information, call 775-751-1970.