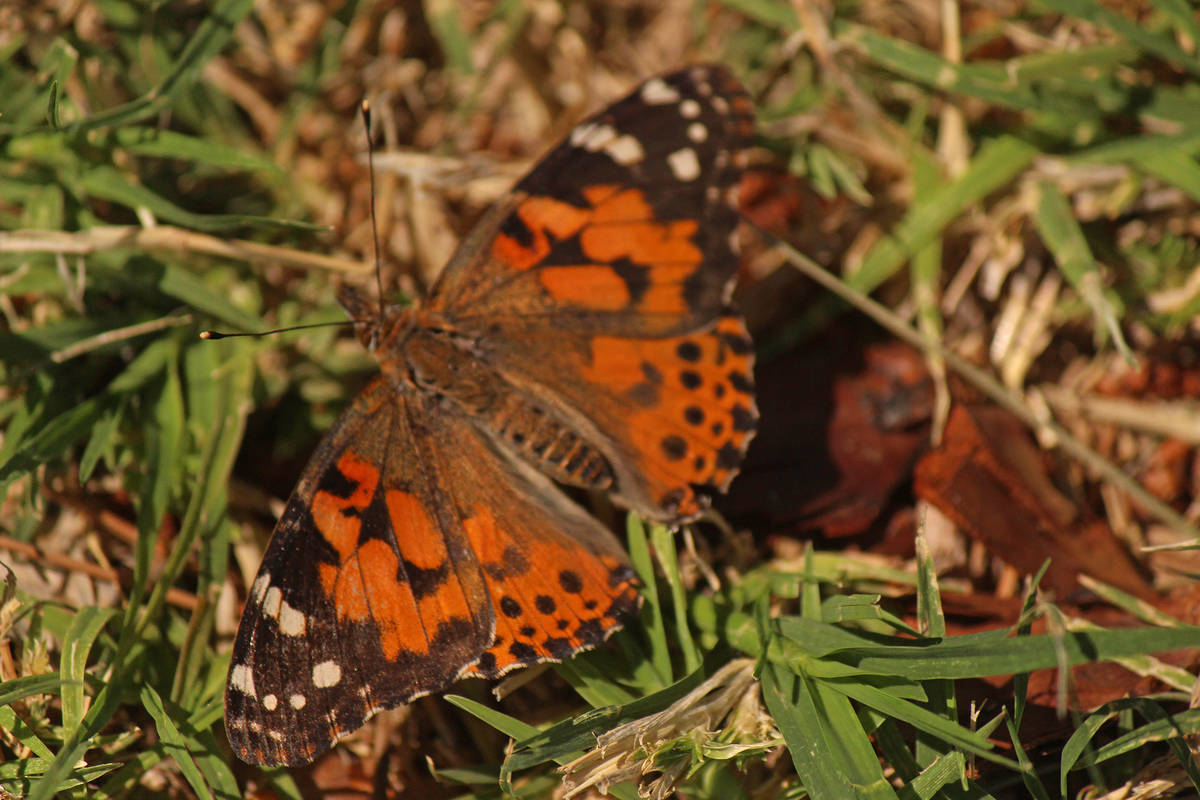 Jeffrey Meehan/Pahrump Valley Times Dozens of butterflies were released in remembrance of lost loved ones for the 16th annual butterfly release at the Calvada Eye in 2019 in Pahrump. 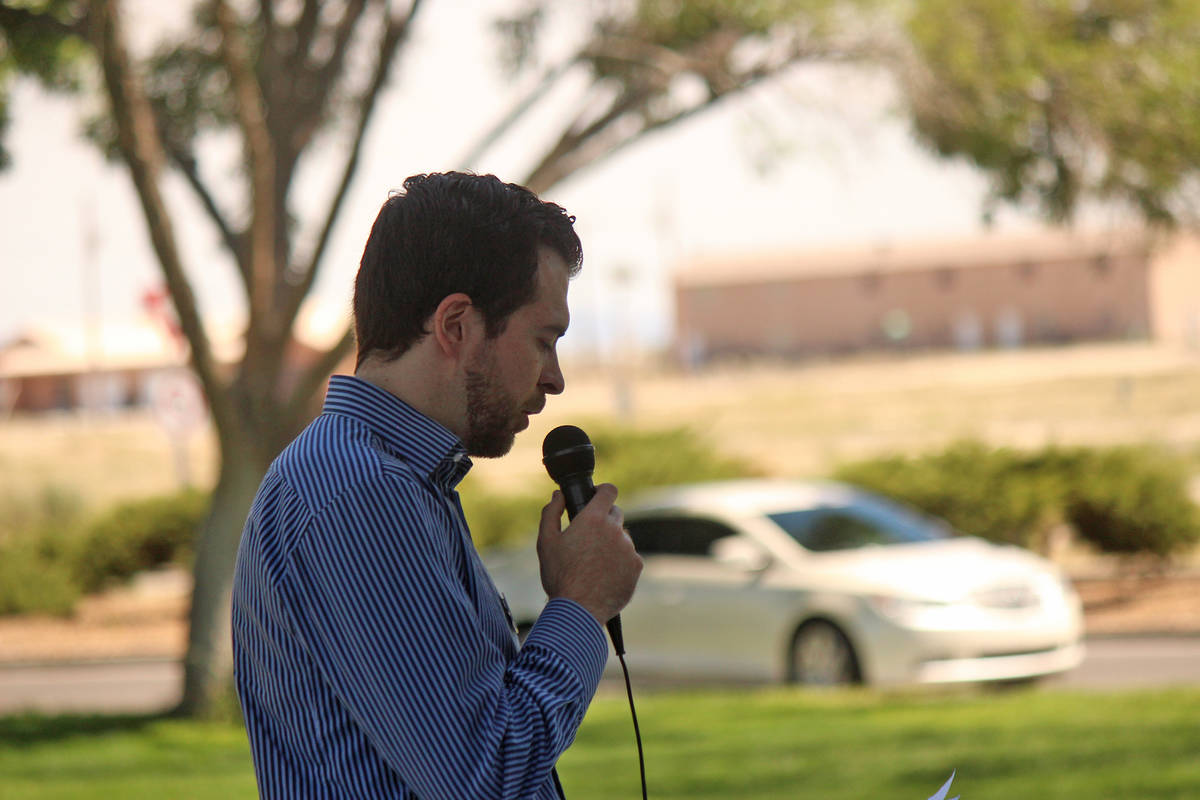 Jeffrey Meehan/Pahrump Valley Times Richard Martin, Nathan Adelson Hospice chaplain in Pahrump, speaks during the 16th annual Celebration of Life Butterfly Release at the Calvada Eye at the end of April 2019. Martin delivered an inspirational message during the event. 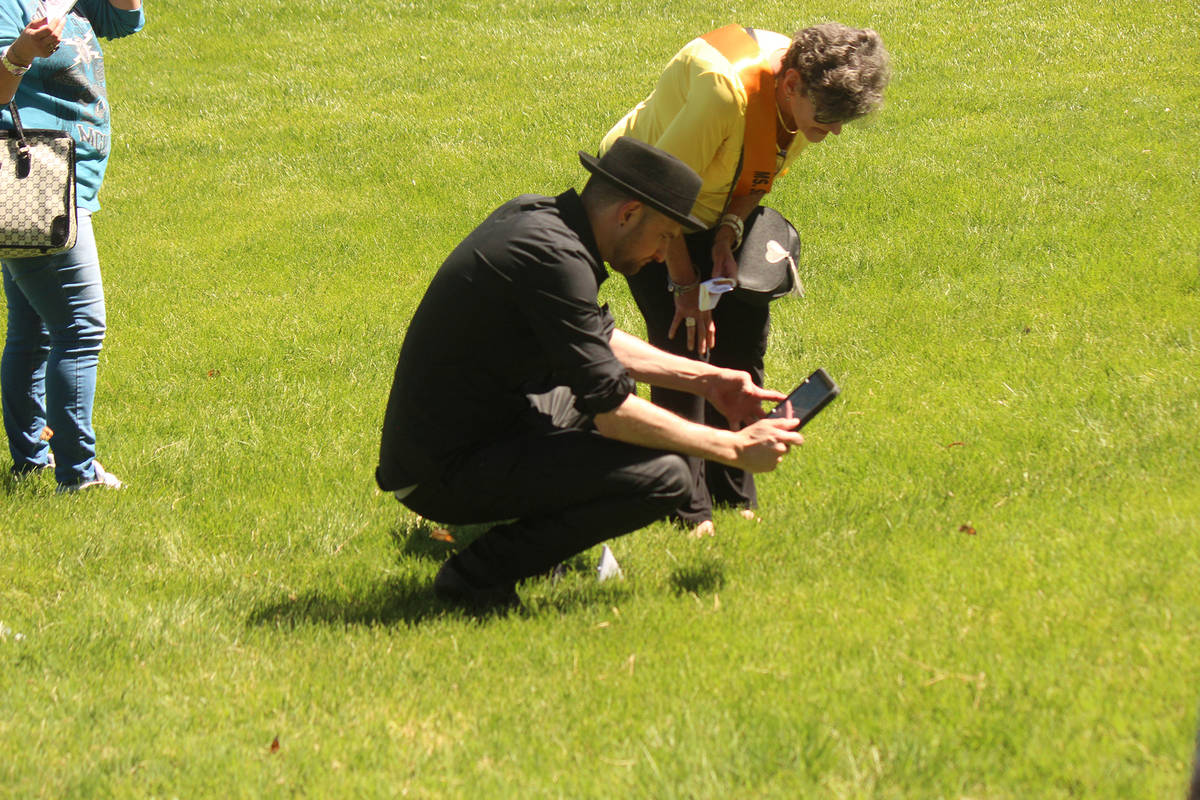 Jeffrey Meehan/Pahrump Valley Times Roughly two dozen gathered at the Calvada Eye at the end of April 2019 for Nathan Adelson Hospice’s 16th annual Celebration of Life Butterfly Release. The release has been held virtually since the start of the COVID-19 pandemic.

Grieving openly can be important in coping with the loss of a loved one.

Richard Martin, chaplain at Nathan Adelson Hospice in Pahrump, says, “A lot of people feel very uncomfortable about loss, but the reality is that one of the best things we can do is to grieve openly, share openly about the impact that losing a loved one has had on us.”

Martin is working on reaching out to the community about the available bereavement services at Nathan Adelson, which has a program that includes several local gatherings and bereavement groups to help people cope with the loss of a loved one.

“One of the most important things that we’ve been trying to do is to make sure people are aware of the resources that are still out there,” Martin said.

The primary part of Nathan Adelson’s bereavement program is its bereavement groups. With the COVID-19 pandemic, however, those groups have moved completely online.

“We’ve had to kind of adapt to figure out how to best serve people in the midst of a pandemic,” Martin said. Martin said that the last 18 months has been a bit of an adaptation for them.

One important factor was moving online in order to keep consistent in providing services, “Because we would have had to be canceling every other month and all those things. We just wanted to be able to provide consistent support during this time.”

Martin noted that the bereavement services are open to the entire community regardless of whether they are connected to a Nathan Adelson Hospice patient. Nathan Adelson is the only nonprofit hospice in Southern Nevada.

These bereavement groups take place several times a week and at various times.

“The goal is to create a comfortable and confidential environment so that the participants will be able to share their grief experiences with others and feel the support and strength from those who are also coping with loss,” Martin said.

Martin said the rollout of virtual bereavement services has worked out well for many.

“I”ve been really blown away,” he said. “People have been so receptive to the virtual groups on average. We can’t meet everybody’s needs with the virtual options, but we’ve had so many people who have shared how the virtual groups have changed their lives because they’re either homebound or have moved out of state to an area with not too many resources, and they’ve still been able to participate in things like that.”

Martin said, “We’ve been very encouraged with the response that the virtual events have received.”

Martin said that the groups are very open and welcoming, and the virtual service is also easy to participate in.

“They’re done via Zoom, and they really just require the clicking of an invitation in the email,” he said. “It’s not very complicated at all, and you don’t actually have to download Zoom to participate.”

People can connect on their mobile devices and by PC.

People can get information on being connected to a group by heading to nah.org or calling the main bereavement number at 702-796-3167. Martin said there are several groups available, and the bereavement line can connect people with the one that best fits each participant.

Each group will have about seven to 15 members. With moving online, Nathan Adelson in Pahrump is considering keeping the virtual options open even after the groups move back to in-person at some point.

Martin pointed to Bereavement Manager Petra Eastwood, who he said has become a big believer that the nonprofit hospice has been missing a lot of people who are now receiving services through the virtual groups.

“After we’re able to do in-person groups, we’ll most likely keep some virtual options open as well,” he said.

Another part of the bereavement program is the annual events Nathan Adelson puts on in Pahrump and Las Vegas. These have also gone virtual and been modified due to COVID-19 concerns.

One of those events is the annual butterfly release, which typically occurs in April or May at the Calvada Eye in Pahrump. “It’s very well-received, and it’s a beautiful event,” Martin said.

This event has gone virtual for the last two years due to the pandemic.

Nathan Adelson’s Light Up a Life, a holiday candle lighting service, is held annually during the holiday season to memorialize loved ones lost over the last year, according to Martin. This event has been held in various locations in Pahrump.

“Whether that will be virtual or in-person will be dependent on where things are at in a couple of months,” Martin said.

Another offering by Nathan Adelson is for youth ages six to 17. Camp Erin, a three-day camp for these ages, is for those youth who have experienced the loss of someone close to them.

“It’s specifically to help children to cope with their losses,” Martin said.

This event did occur this year but was modified due to COVID-19.

“We have great volunteers who have lost loved ones, and great staff people who help lead that every year,” Martin said. “It just creates an opportunity for children to have a safe place to open up and share. A lot of times, kids are not in the position in school where they feel comfortable sharing the emotional parts of a loss like that. This creates a place where they can effectively communicate what they’re going through.”

For questions specific to Pahrump bereavement services, people can also call Martin at 775-315-1073 for more information.

“There’s no right way to experience grief and loss,” Martin said. “People should never feel like there’s a specific timetable or structure that they have to adhere to. The people we love are very unique, and the grief we experience is very unique.”