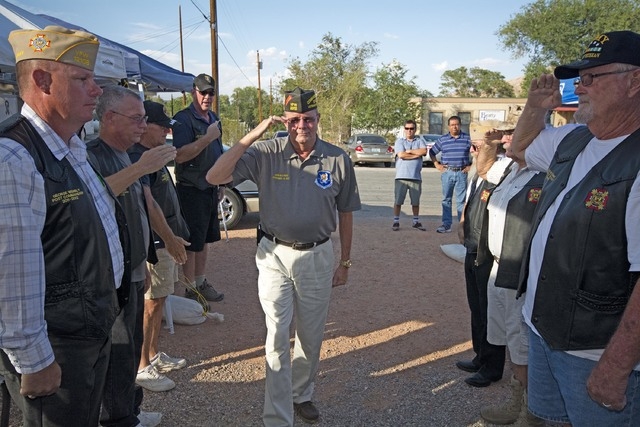 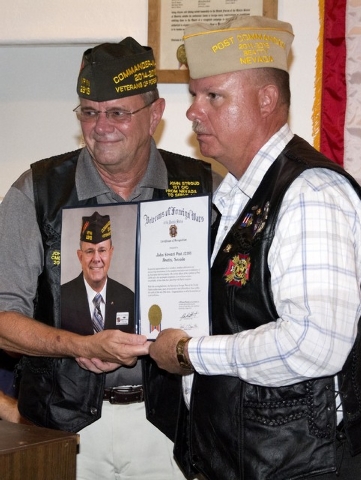 Stroud said he came “To dedicate this beautiful post home.”

“I’ve been so impressed with the members of this post and their ladies’ auxiliary. They have, in just three short years of having the VFW here, acquired a post home and done the beautiful things they’ve done to have a place to meet.”

Since acquiring the former Episcopal church building last year, which was being used as a private residence, members of the post have completely gutted and renovated the building, and are still making improvements. Stroud’s wife said they did it in the right order, finishing the ladies’ restroom first.

The commander-in-chief lives in Hawthorne, which he referred to as “America’s patriotic home.”

“Those five Congressmen who voted no, and those three Senators that voted no, the VFW has them in their crosshairs. The days of playing patty-cake with Washington are over for the VFW.”

There was an exchange of gifts, with the commander-in-chief giving the post a number of personal items to be added to the memorabilia on display in the post canteen.

The post presented him with a plaque made from a gold pan, and the ladies’ auxiliary presented his wife with flowers.

About 15 members of the Strozzi family were on hand for the ceremony, including his sister, Enes Wells, and cousin, Ted “Bombo” Cottonwood.