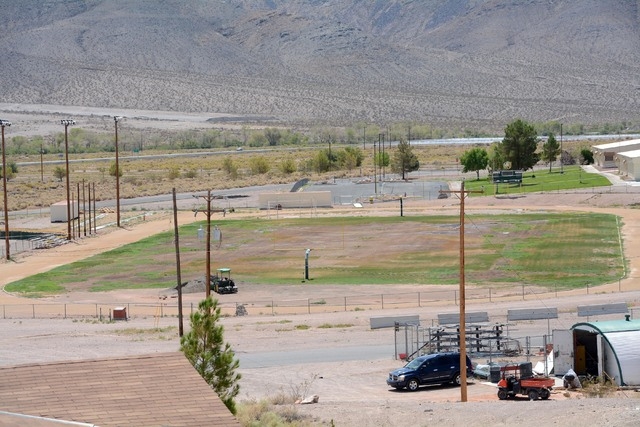 Soil-Tech of Las Vegas submitted the only bid, which was approved at $75,573.

Soil-Tech has worked on various nature construction projects including Coyote Springs north of Las Vegas, and restoring the canyon walls near Hoover Dam after construction of the Mike O’Callaghan-Pat Tillman Bridge in 2010.

District Transportation and Maintenance Supervisor Cameron McRae said results from soil samples taken at the Beatty site revealed the conditions on the school’s football field are less than favorable for growing turf.

“The soil samplings at the Beatty High School football field showed a very high alkaline salty base grass, which is not conducive to growing Bermuda or Fescue grass,” he said. “We took soil samples a year apart and came to the same conclusion.”

McRae also noted the frustration regarding the maintenance of football fields throughout the district is not unique to Beatty.

He said Nye County’s fields as a whole, are just as good as other fields elsewhere.

“All schools experience some level of frustration of football fields and baseball fields,” he said. “It’s because we don’t have the funding or staffing to maintain the fields the way some people would like to see them maintained. Some are not the best and some are not the worst.”

The situation at the school forced the football team to play their home games on the baseball field last year.

“The field has historically been an issue on and off,” he said. “When I took over maintenance operations, Beatty along with Tonopah’s football field were in need of some significant maintenance. We went in and did some patch sodding where there was no grass. It took in Tonopah and did fine, but it didn’t take and do well in Beatty.”

About three years ago, the district removed several inches of soil from Beatty’s field and brought in new soil and sod but that effort failed.

“We thought that it took, but it ended up not surviving for a whole host of reasons,” he recalled. “We got help from vendors and soil experts and we also did some modifications with irrigation. At the end of the season we seeded and top-cressed. Then we had the rains, which washed all that work away and it didn’t take.

McRae said the latest effort will include a process known as hydroseeding as opposed to traditional seeding methods.

“They are going to do a tilling and product remediation of the soil as defined in the specs,” he said. “They will do another soil test before they go to hydroseeding to determine if they believe their work had been successful. If it’s successful they will hydroseed with either a Fescue or Bermuda grass.”

Additionally, McRae said if hydroseeding is unsuccessful, the district has another plan.

“If there still is a significant amount of salinity on the soil, we will have to replace the hydroseed with a sod-laid grass which is salt resistant,” he said.

Artificial turf, McRae said, is not an option for the district to presently consider, as the costs exceeds what the district wants to spend for the project.

“You are looking at about $500,000,” he said. “But once you decide to do that, there are other things that portions of the field are used for like track and field. Tracks have an inner circle and we’d have to have new concrete edging and new drainage. We’d have to do artificial turf for not just the playing field but the sidelines, backfields and other areas.”

Last November’s bond question, according to McRae, would have given the district more flexibility to address capital improvement projects in Beatty and other district facilities.

Though the question had nothing to do with raising area taxes, Nye County voters rejected the question that would have allowed the district to continue issuing the bonds, providing much needed capital for ongoing construction projects district-wide.

At present, the district is looking at more than $17 million dollars to address those projects.