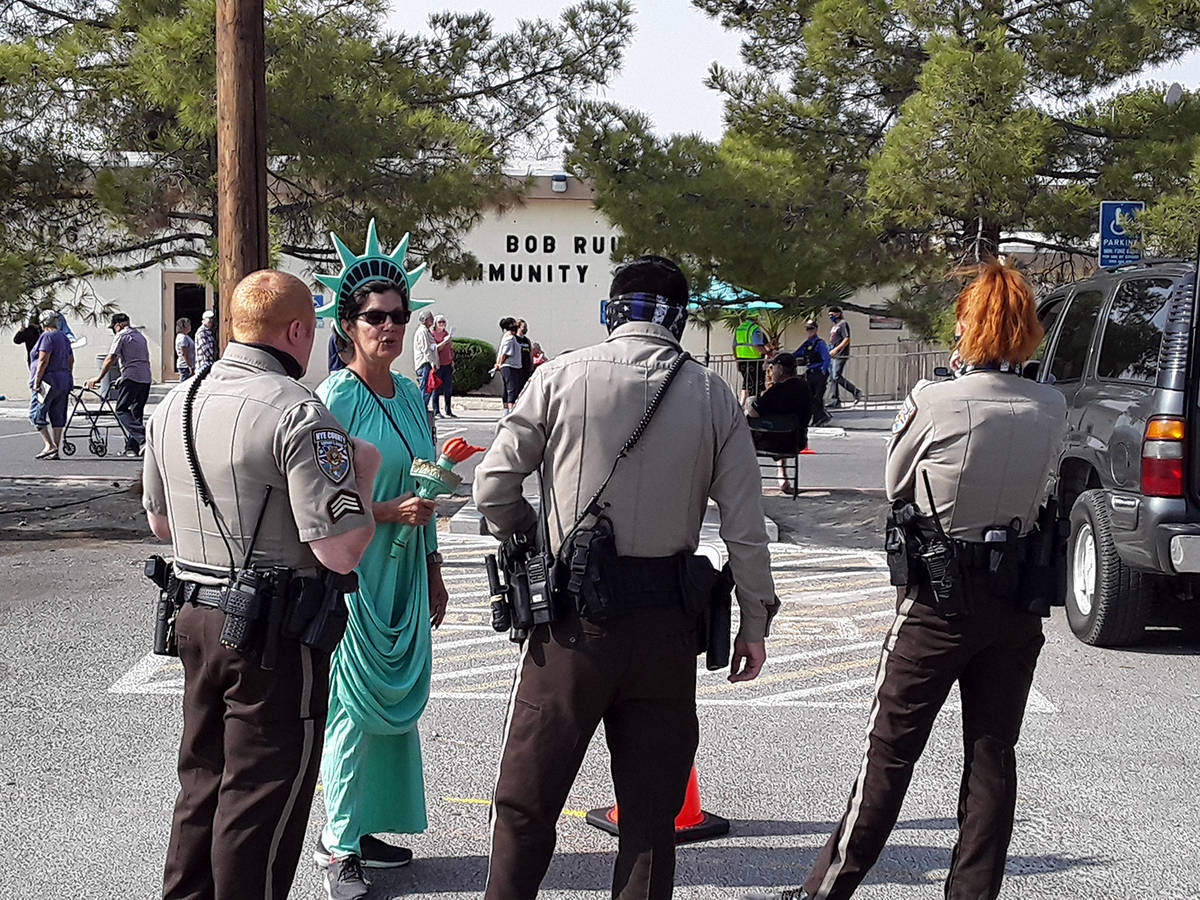 Selwyn Harris/Pahrump Valley Times Dressed as Lady Liberty, local resident Pamela Morgan speaks to sheriff's office deputies after poll observers claimed she violated early voting election rules by crossing over a ‘no campaigning’ boundary that separates voters from groups of supporters camped out in the parking lot of the Bob Ruud Community Center. The situation was eventually resolved with no further incident.

A minor dispute during early voting at the Bob Ruud Community Center just after 11 a.m., on Wednesday, required the response of Nye County Sheriff’s Office deputies.

The incident began when a woman, identified as Pamela Morgan, crossed over a “no campaigning” boundary that separates voters from groups of supporters camped out in the parking lot of the community center, displaying signs and banners of their preferred candidate.

It should be noted that Morgan was wearing a costume resembling the Statue of Liberty, complete with a torch.

The distance of separation from the parking lot is roughly 100 feet from the entrance of the polling station.

Legal interpretation of the issue

According to Nevada Revised Statute (NRS), 293.361, during the time a polling place for early voting is open for voting, a person may not electioneer for or against any candidate, measure or political party within 100 feet of the entrance of the voting area.

Electioneering is defined as the act of wearing campaign paraphernalia or carrying signs to a polling place with the intent of influencing voters.

“I came here dressed as the Statue of Liberty because I want to represent freedom for everybody,” Morgan said. “They have a line on the ground that says no campaigning beyond this point. I was not campaigning, I was actually just going over to the voters, walking by in my costume, and saying thank you for coming out and voting because we greatly appreciate it, because every vote counts. I was not saying which side or the other, and they actually have Democratic and Republican party observers that monitor certain things here.”

Morgan went on to say that one observer on site told her that she needed approval in order to cross the line while wearing the costume.

Morgan, meanwhile spoke about her interaction with sheriff’s deputies at the site.

“The cops told me that they got a call about a disturbance and they wanted to talk to me,” she said. “I told them the story about what happened and then they told me that I either needed to get it approved or just not cross the line. I’m going to find out who I need to speak to because I want to get it approved. It seems un-American and unconstitutional to ban the Statue of Liberty just for being there. I will keep at it because I’m going to be here every day in my freedom costume, or I should just call it my Halloween costume, but they will probably still say that I’m wearing a costume of representation.”

Additionally, Morgan, who moved to Pahrump roughly two years ago from Newport Beach, California, expressed her thoughts on the political leanings of the first observer she encountered.

“I’m not sure which political party he’s affiliated with but I’m guessing it’s the Democrats, because he wasn’t very kind about anything,” she said. “Before I left I said, god bless America, and he just turned his back to me, so I thought he’s a Democrat. We live in the greatest country on this planet, and we have freedom, which is awesome. He told me that I needed to get it approved, and I just walked away. I plan on supporting Trump, because he’s the best president we’ve ever had, absolutely.”