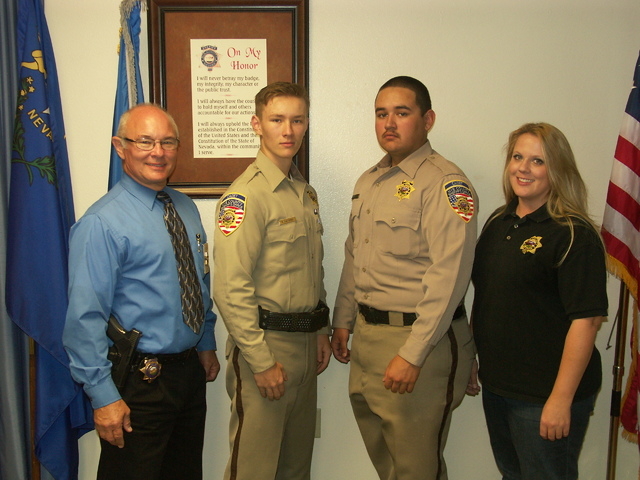 The career-oriented program, a subsidiary of the Boy Scouts of America, gives young adults the opportunity to check out a career in law enforcement simply by working alongside sheriff’s deputies.

Danneker said the program is open to qualified young adults ages 14 through 21.

“If they are still in high school, we ask that they maintain a “C” average. We do check their report cards and talk to their counselors to make sure they are meeting at least a “C” average. We also do a background check because they need to have a pretty clean background to participate. It’s very important that they have an interest to learn about law enforcement,” she said.

Explorers can remain in the program until they are 21.

Danneker said there’s a minimum eight hours of community service-related activities required if they plan to remain in the program.

At present, there are just five individuals who are now cadets.

“We set a low minimum because we don’t have that many youths involved just yet. From there, they can do community service or volunteer work at the sheriff’s office or in the jail. They will have a minimum of two training classes each month in some type of law enforcement-related topic, whether it be domestic violence situations to simple handcuffing. They will get real training in law enforcement to help prepare them if they want to become police officers. It really gives them very good insight,” she said.

What’s known as ride-alongs are another activity in the program, where cadets are paired with a sheriff’s deputy and respond to calls as they come in from dispatch.

Elijah Daharsh is a five-year Pahrump resident who is taking college classes. When asked why he decided to join the program, his response was immediate.

“My father is a cop and it’s always been a dream of mine to become a cop.” he said. “When I saw that the sheriff had a cadet program, I jumped on it. It’s a lot of fun and it’s great experience. I want to pursue a law enforcement career like my father. Some of my friends were very judgmental, and they looked at me a little differently when I joined. As far as I’m concerned, it’s my decision to do what I choose with my life. They can look at the badge or who is behind it,” Deharsh said.

Deharsh’s friend James did not question why his buddy joined the explorer’s program, but instead decided to become an explorer as well.

James said he moved to Pahrump from Texas more than 14 years ago. He is now a senior in high school.

“I thought this would be a great learning experience to gain more discipline and other life skills,” he said.

He took a pragmatic stance over what his peers think of his decision.

“I had to push some people away, but the friends I hang out with now say I made a smart decision and it was a good choice, which will take me a long way in life,” he said.

Danneker said even if the cadet decides not to become a law enforcement officer, the experience gained from the program can effectively serve them in ways they probably never even thought of.

“The program goes well beyond the fact that they get to wear the uniform and ride along with the officers, sometimes with lights and sirens going. It gives them a really good idea on whether this is a career they want to pursue when they turn the right age. It really opens the eyes to what the career is all about and the life of a police officer,” she said.

The deputy also noted that the program will benefit the sheriff’s office as well as the entire community.

“They are not paid, but they will be a great additional resource. The program is not funded through the department or the county because we work with fundraisers and donations. People may have already gotten a knock on their door, and we do have a fundraiser in October along with a few other fundraisers. Anyone in the community who is interested in donating — we can definitely accept those,” she said.

As an explorer herself years ago in Washington State, Danneker said she still applies the skills she learned even today.

“It was a great benefit for me. I became more confident in communicating with people in various situations. Average people are not used to seeing child abuse or sexual assaults or deceased bodies and having to work around them. It really gives you that foundation early on to where you kind of get used to it,” she said.

“This program is going to be re-tooled and we’ll be going to job fairs. It is going to be countywide to include Tonopah and Beatty. There will be stringent guidelines for both riding along and training. We are all really happy with the direction it’s going,” he said.

As the NCSO’s chief grant czar, Marshall said he’s looking at whatever grants may be available to bolster the program.

“There are explorer grants that are available and we are looking into those. Right now we are accepting donations. Myself and Assemblyman James Oscarson have donated funds to get the program up and running because there is a cost for it. There are uniforms costs and membership fee costs as well as travel costs when they have to go on trips,” he said.

Danneker would like to see more females in the program. The five cadets already newly enrolled are all males.

She said the maximum number of cadets is 12.

“We have been doing our recruiting and I would love to see more females involved. I have two right now that are pending and I’m eagerly awaiting to receive their applications back,” she said.

The program will officially be recognized as bona fide “Explorer Post” by the State of Nevada in weeks to come.