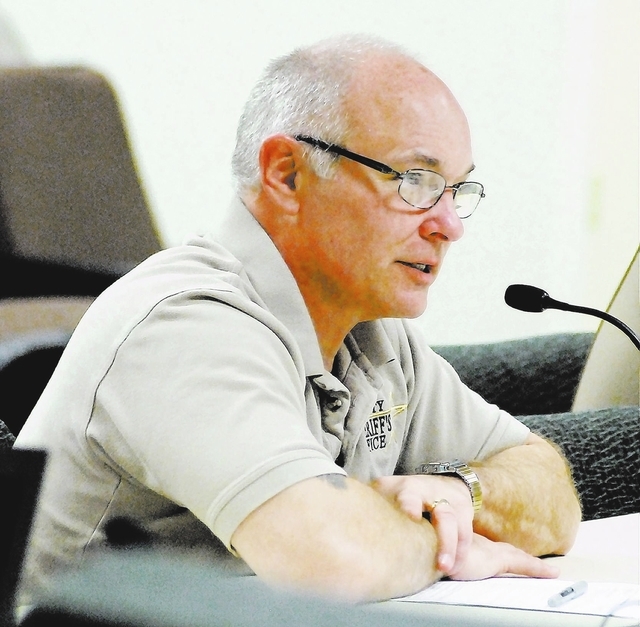 The Nye County Sheriff’s Office is looking to take traffic tickets digital following the approval of a more than $20,000 grant from the state to purchase several electronic citation writers.

At the Sept. 3 Nye County Board of County Commissioners meeting, the sheriff’s office came before the commission seeking approval for a $24,957.92 grant for the purchase of eight electronic citation writers/traffic collision report writers for the department.

The funds, which were granted to the county through the State of Nevada Office of Criminal Justice Assistance, will give the sheriff’s office $22,730.80 for the project, meaning the county will have to match the grant with an additional $2,227.12 in order to receive the full amount needed to purchase the new equipment.

According to materials included in the backup for the request, the additional funds needed to pay for the project will come from the county’s Special Capital Projects fund.

There are reportedly three parts to each of the eight electronic ticket writers, the actual hand-held device, the printer and the chargers for each device, costing a total of $2,989.99 per set.

All together the eight new electronic citation writers will cost a total of $23,919.92.

In addition to the eight citation writers, the department also will buy two ethernet power supply cradles for the devices, costing $519 each for an additional total of $1,038.

Asst. Sheriff Rick Marshall said the benefit of the new electronic devices is they cut down on the amount of time staff for both the sheriff’s office and the courts have to spend inputting information from the handwritten tickets they receive into their systems.

“The two most important things are it cuts down on filing time for our agency and for the courts as well,” he said.

“What happens is the citations, if they are handwritten, come into our office and our girls have to take the information and input it into our system, then send it over to the courts and then the courts take it and hand input it into their system. With electronic citation writers, from the very beginning, our officers can scan the driver’s license information, which then auto- populates into the computer and they can scan the vehicle information and it auto-populates in as well. From there it is electronically sent to our records management system and electronically sent to the court so you don’t have to have the clerks inputting anything,” the assistant sheriff added.

Marshall said the department has been searching for a way to begin implementing the electronic technology for some time now, but the funds weren’t available until recently.

When the opportunity to apply for a grant to help offset the cost of the equipment became available to the sheriff’s office, Marshall said the agency quickly took action.

“We’ve wanted to for years because that’s the trend around the nation and around the state, but there just has not been this type of grant available. We’ve been on the lookout for it and then the opportunity came up so we jumped on it,” he said.

Before the new electronic ticket writers can be implemented across the county, however, the northern courts in Tonopah and Beatty will have to be equipped to accept the digital tickets.

Marshall said after speaking with the courts in Pahrump, they have the necessary technology already in place to accept the new tickets, and are working to be ready to take them once deputies begin using the new devices.

Following the approval of the grant funds by the county commissioners last week, the sheriff’s office purchased the new equipment and hopes to take possession of it within the next two weeks.

Once the department is in possession of the electronic citation devices, Marshall said they will send two master trainers to Las Vegas to be trained on the technology. Those two trainers will then come back and teach the rest of the department how to use them, the assistant sheriff said.

“We’ve already purchased them, we’re just waiting for shipment and Paula Cooper will be the project manager, she’ll contact the state, who’s giving us the Brazos Technology, they’re giving us that for the system. Once that is input we will send two master trainers to Vegas to be trained by Nevada Highway Patrol and then they will come back and train all of our guys and then we’ll be able to start using them,” Marshall said. “We’re hoping to have them up and running by the middle of October maybe the end of October.”

After the initial eight electronic citation writers are put to work, Marshall said the department will visit the idea of purchasing more of the devices in the future as the courts allow for more and more electronic tickets to be accepted throughout the county.