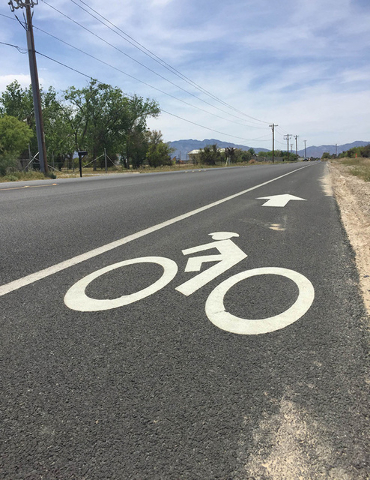 A proposed bicycle plan set forth by the Nevada Department of Transportation drew a mixed reaction at the Regional Planning Commission last week.

The Nye County Bicycle Plan, which is part of a statewide bicycle plan, was brought up to gain approval by the planning commission, so it could then be reviewed at a county commission meeting in May for recommendation, but the vote drew a mixed reaction, as it passed 4-2 in favor of moving on.

The plan’s introduction states that the initial strategy for the state bike plan is for NDOT to assist local jurisdictions with adopting local bicycle plans that are endorsed by the Nevada Bicycle and Pedestrian Advisory Board.

The Nye County Bike Plan was created with that strategy in mind, according to NDOT. The plan notes the major factors of the state plan that are appropriate to Nye County with a concentration on documenting the existing and proposed infrastructure improvements wanted within Nye County.

The biggest question on the project that was presented in a 65-page informational packet, is where the money was coming from.

Since a representative from NDOT was not present, those questions could not be answered.

“I don’t know where we could get funding for something like this,” Koenig said. “We can’t even fix the roads and the potholes we have, so I’m not sure why we’d want to give it to the board of county commissioners and further burden their meetings with something like this.”

Koenig said he’d rather see the effort being put into the bicycle plan be focused elsewhere.

“I’d rather see 65 pages on the pros and cons of stoplights versus traffic circles,” Koenig said.

In those 60-plus pages of information on the project, the first few pages lists several areas of focus for the bicycle plan, including largest needs, biggest issues and greatest assets.

The largest needs were defined as increasing information on cycle tourism opportunities in the county and to create a bicycle tourism map with all the historical and scenic destinations locally that can be visited by bicycle.

The greatest assets listed in the county for the bike plan were the dirt roads from Mountain Pass to Pahrump, which were noted as “a great opportunity for mountain bike trails” and the parallel roads to the state highway, as it can get you from one side of Tonopah to the other without using the highway.

One board member in favor of the bicycle plan, Gregory Hafen, said he is an avid cyclist and showed the plan to fellow riders. They explained that Pahrump lacks paths now and that ones in place are used often. Paths running to the schools in town are needed, and even though they are mentioned in the plan, the map of the proposed paths did not include those, which he said are important.

“More is better than what we have now,” Hafen said.

Planning member Robert Adams saw the use of the bicycle lanes differently, as he explained that he doesn’t see much action on one of the main existing bike paths in town.

“I go down Homestead often and I look at that bicycle path, it’s got weeds growing all over it, and I don’t see a great deal of usage on it,” Adams said.

Hafen explained that the reason why there isn’t much use on the pathways is because of the prevalence of deterrents on the path.

“The reasons you don’t see many people cycle on the pathway on Homestead is because it’s covered in rocks,” Hafen said. “If you go down Manse Road where it is maintained with street sweepers… that is used quite frequently.

“If you go there on a Saturday morning you will see quite a few cyclists using it. With our little skinny tires, we don’t play around with gravel.”

Koenig agreed with Hafen that adding bike lanes is needed in town, but he added that adding them as they fix roads around town is the best option in his opinion.

Not all areas are getting those upgrades, but it was recommended in public comment by Michael Lach, a cyclist who rides 6,000 miles a year, that any road with a speed limit of 45 miles per hour or higher should have bike lanes, three feet in width installed on each side of the roadways.

“Those are the roads that you run into the issues because drivers always go 10 miles an hour over, so now you’re looking at 45 to 55 mph,” Lach said. “Riding a bike and there’s no shoulder, and cars are passing you at 55, it’s not a fun experience.”

Planning member Vincent Clark explained that he would rather see the funds that would be used on the bike project put toward roadways.

“We desperately need paved roads in this county that are rapidly turning into unpaved roads,” Clark said. “I think we need to spend the money fixing the roads before we start building bicycle paths.”

Koenig explained that once NDOT installed the proposed bike lanes on the two major highways in town that they maintain, that then the county should look at the plan realistically.

“I would suggest to NDOT for the bicycle paths of 160 and 372, that then we’ll reconsider the rest of the plan,” Koenig said. “That’s where I run into them all the time.”

With the planning commission voting in favor of passing the bike project to the county commission, the issue will be brought up next month and the hope is that NDOT is present to deem whether or not to go on with the plan as is, to make any changes to the existing plan or even to scrap the plan for the time being altogether.