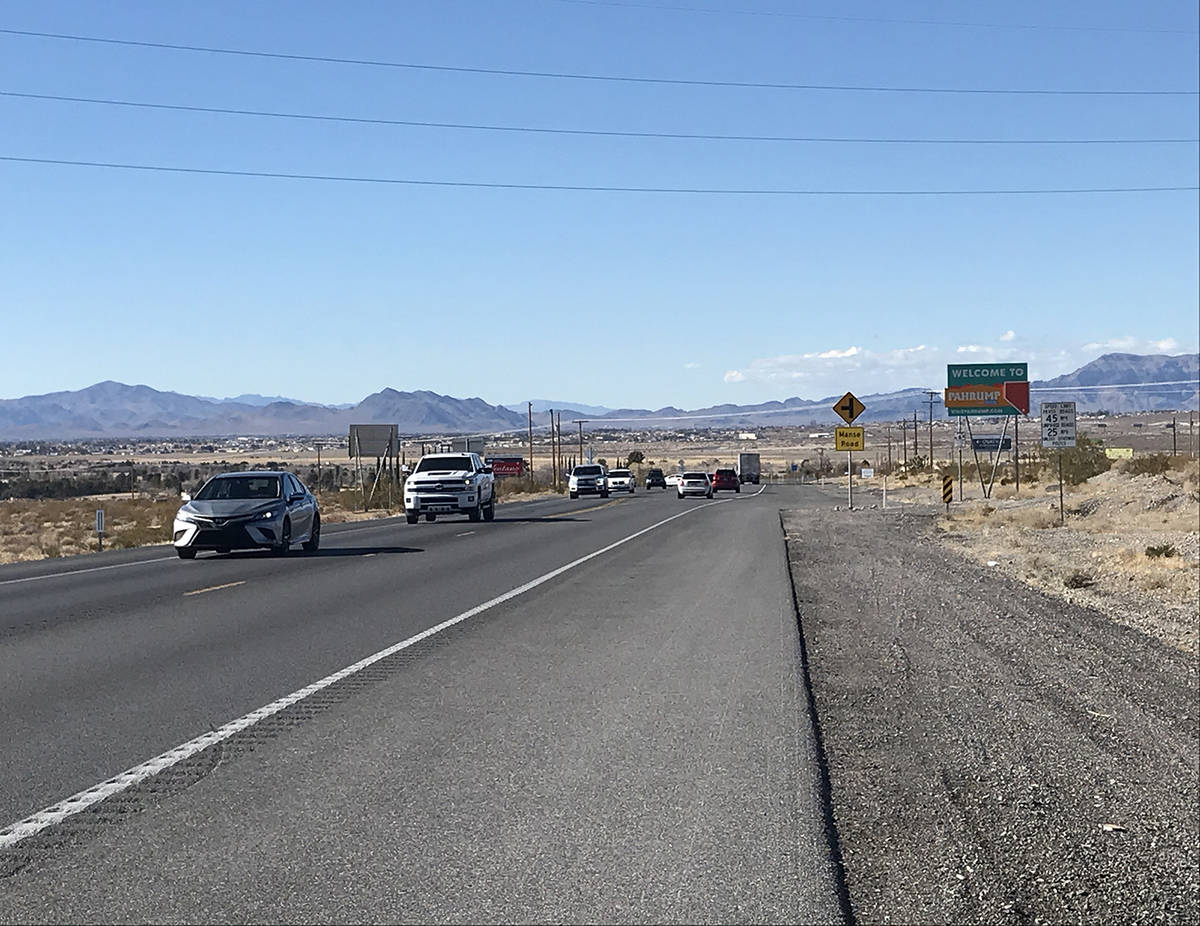 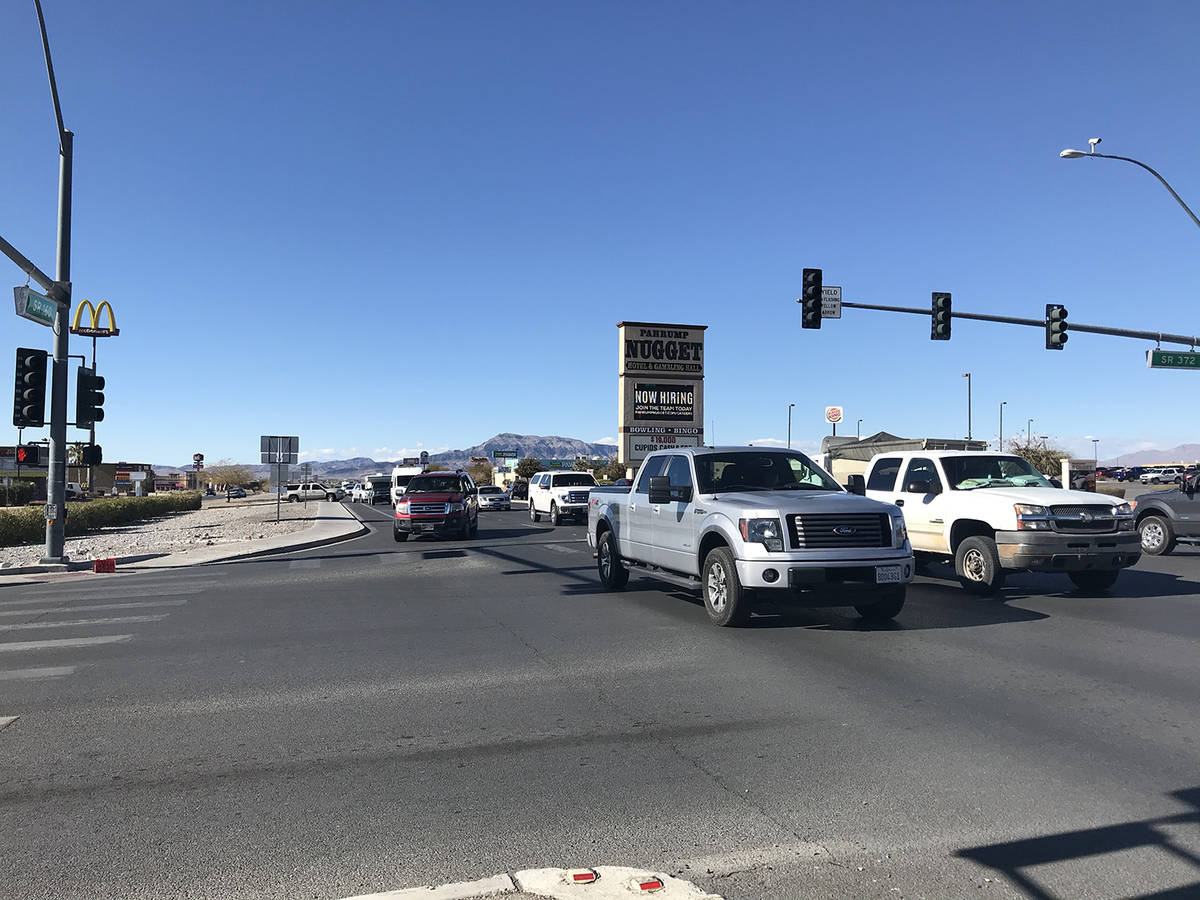 Robin Hebrock/Pahrump Valley Times Selected as the county's number two top priority was the addition of a dedicated right-hand turn lane off of Highway 160 and onto Highway 372.

Officials with the Nevada Department of Transportation provided Nye County with an annual presentation on Tuesday, Feb. 2 and while the work slated for the coming year was a topic of focus in the presentation, the conversation that morning revolved much more around what the county’s priorities and concerns for the future are.

NDOT Director Kristina Swallow opened the presentation with an outline of the priorities and concerns that had been collated based on previous discussions between the department and Nye County, touching on each to provide an update as to where NDOT was with those particular items.

Listed first was the proposal to extend the turn lane at Manse Road and Highway 160 or consider other intersection control possibilities.

“Turn lane extension at State Route 160 at Manse Road, currently the traffic volumes aren’t high enough for us to extend that turn lane,” Swallow told commissioners. “However, we do understand that there is a new developer project that is starting to advance and it may be possible that, in the NDOT approval process, we will need to require a longer turn island at that point, so we will be keeping this concern at front of mind as volumes on the road continue to grow, as well as, as new development that requires permitting continues to occur in the vicinity,” Swallow explained.

As to the second priority listed, the proposal for a dedicated right-hand turn lane on Highway 160 southbound at Highway 372, Swallow said NDOT already has the right-of-way at that intersection, which would be needed in order to facilitate that alteration.

“And we are looking at scheduling this work. Just last month, actually, our scoping group provided an update and they are looking at the intersection, developing concepts for what we may be able to do at this intersection. We’re hoping to continue to advance this project and figure out the funding and the timing of it,” Swallow detailed, adding that more information on that particular project would be available later in the spring.

As to the remaining items listed on the county’s priorities and concerns, Swallow said some were not warranted at this time, as traffic volumes in the subject areas are simply too low. This included two items focusing on the addition of more left-hand turn lanes at Homestead Road and Highway 160; and the request for the installation of a traffic signal at U.S. 95 and Highway 374.

Others, however, have already been addressed, including the installation of flashing wildlife warning signs on Highway 160 around both Simkins Road and Linda Street and the construction of a new crosswalk on Highway 160 at Postal Drive.

Still others remain on NDOT’s radar. Swallow said NDOT was currently evaluating whether or not “Daytime Driving Lights Required” signs should be installed on Highway 160 at the Johnnie Curve and was also reviewing the item regarding possible restriping of Highway 373.

As to the item regarding widening of the shoulders on Highway 160 from Basin Avenue to U.S. 95, Swallow said that because of the size and scope of such a project, it would need to go through the One Nevada Prioritization Process before it could move forward. “Any sort of project like this would need to go through that process,” Swallow said. “It’s just a larger investment and we want to make sure it meets the criteria needed for statewide prioritization process.”

Widening of the shoulder on U.S. 95 would require the One Nevada Prioritization Process as well. Swallow said for the item on creating an alternate route around Pahrump, that would, if taken up by NDOT, need to go through that same statewide prioritization process. However, the alternative route project would more likely fall to the responsibility of the local government rather than NDOT, she noted.

The final item listed on the county’s priorities and concerns related to a speed study in Amargosa Valley and the possibility of installing deceleration lanes at U.S. 95 and Valley View Road.

“Unfortunately, right now, there isn’t enough right-of-way to advance it easily but we can and will look to see if we are able to advance it through the (statewide) prioritization process. One of the challenges we have here is, the volumes on Valley View Road are actually very low, it’s only 110 vehicles per day and so it may be difficult to meet those thresholds but we will take a look at it,” Swallow stated.

When it came time for commissioners to hash through these items and decide which they would like to make their top two priorities, Nye County Commissioner Leo Blundo kicked off the discussion by turning to Nye County Manager Tim Sutton and requesting Sutton recount the conversation that had occurred recently regarding the developments on Highway 160 in connection with Spring Mountain Motor Resort, to which Swallow had alluded when highlighting the county’s concerns about the intersection of Manse and Highway 160.

Blundo said the reason he wanted to have that detail brought to the forefront was so NDOT would be aware of what the developer was intending, remarking, “The last thing I think we should be doing is spending money and then having to go back, rip things up and spend more money.” Rather than have a roundabout built in that area, Blundo said he felt a lane expansion would be more suitable, remarking, “Now I can address the Manse Road issue… the Mountain Falls issue, we can just address all those issues on Highway 160 from where it bottlenecks down, with contributions from multiple sources.”

Blundo proposed that the county make its top priority the widening of Highway 160 to four lanes all the way through, from just east of Mabes Street where the highway narrows to one lane in each direction to just east of Homestead Road where the highway opens back up to two lanes in each direction. The second top priority that Blundo picked was the installation of a right-hand turn lane at Highway 160 and Highway 372.

There was also much discussion about the intersection of Highway 160 and Mesquite Avenue, where continual car crashes, some of which have resulted in fatalities, prompted commissioners to toss around the idea of having a traffic light installed. However, though that item will be added to the county’s list of concerns, commissioners ultimately settled on the two projects proposed by Blundo as the county’s highest priorities, with Blundo’s motion to select those projects passing with all in favor.

As for NDOT’s Annual Work Program as approved by the department’s board of directors, this document calls for a variety of projects in 2021.

Slated to take place in the next year are an Intelligent Transportation System project on Highway 160, an Americans with Disabilities project in Pahrump, several projects along U.S. 6 such as culvert box extensions and replacements for improved flood drainage and 22 miles of chip sealing. Chip sealing is also set for highways 376, 318 and 44. The 2021 work plan provides funding for support for local transit programs, including the Pahrump Senior Center, Nye County Senior Nutrition Program and the NyE Communities Coalition, as well as “various projects” that include small items such as signage replacements.

The total estimated investment in Nye County highways over the course of the 2021 work program comes to $19.5 million.