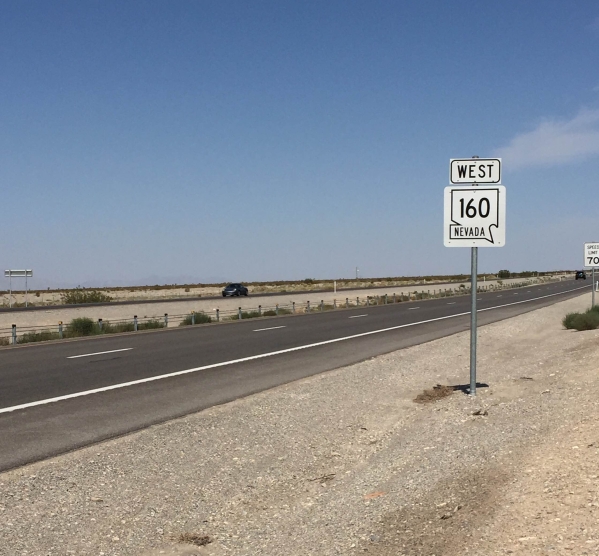 The Nevada Department of Transportation will be busy in the coming year with $41.5 million in various road projects that will affect how Nye County residents travel.

The projects, mainly dealing with road widening, are set to begin by year’s end and all will be complete by early 2017.

NDOT and Assemblyman James Oscarson, of District 36, which includes Nye County, worked closely to ensure needed infrastructure and safety improvements to roads in greater Nye County are delivered in a timely manner.

“We are constantly exploring new and innovative methods for enhancing and delivering a safe, reliable and accessible transportation network for the residents and businesses of Pahrump and greater Nye County,” Oscarson said. “I’m confident that we can achieve these goals with NDOT’s assistance.”

The majority of the projects involve portions of Highway 160, with the biggest one, the widening of a deadly portion of the highway. Although the work lies in Clark County, it will have a major impact on Pahrump and the rest of Nye County.

The $25 million, 5-mile widening project between mile markers 11 and 16 is scheduled to break ground by year’s end and will expand the highway from two travel lanes to four travel lanes, while flattening the side slopes for safety measures.

This will produce a partially-divided asphalt highway that will be significantly smoother, and safely allow passing around slower vehicles. The project is scheduled for completion in early 2017.

The speed limit will be lowered to 55 mph, from 65 mph during construction, with one lane remaining open at all times.

Another project planned for Highway 160 is aimed at aiding law enforcement and emergency vehicles in while en route to incidents.

Additionally, a $890,000, 21-mile-long project will remove portions of existing cable rail median along Highway 160 between mile marker 22 and mile marker 43 in order to create highway crossovers for emergency response vehicles. Construction on this project is scheduled to be complete by year’s end.

A $1.5 million project will improve safety to a section of northern Highway 160 near mile marker 26.5, known as “Johnnie Curve.” Improvements will include extending the guardrail, adding a high friction surface, and installing vehicle-actuated illuminated arrow signs.

Lastly, plans call for widening the left and right hand turns at the U.S. 95 / Highway 160 intersection. Construction is scheduled to begin in early 2016.

Another major project, one that has stirred controversy among Pahrump residents is the $3.09 million Highway 372 roundabouts project.

Roundabouts allow for slower traveling speeds which make for smaller gaps between circulating vehicles for increased traffic volume and fewer delays, in addition to better fuel consumption and improved air quality. Roundabouts, as a result, see fewer crashes than four-way traffic signals. The pair of projects are scheduled for completion in late 2016.

NDOT is pleased with the results of collaborating with Oscarson, stating the work might not have come to fruition if the two hadn’t linked up.

“Assemblyman Oscarson’s support, insight and leadership has enabled the department to fast-track these critical road projects for Pahrump and greater Nye County,” said NDOT spokesman Tony Illia. “These highway improvements would not have been possible without the assemblyman’s initiative, advocacy and persistent hard work.

NDOT advises motorists to use caution while traveling through project work zones, heed construction signage, and take alternate routes, if possible. For the latest traffic updates you can visit www.nvroads.com.