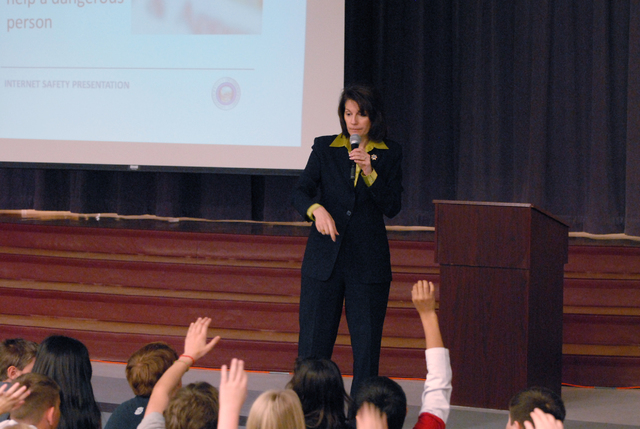 Nevada’s “Top Cop” made a stop in Pahrump this week.

Online stalking and cyberbullying are fairly new issues for parents, schools and law enforcement around the country.

The AG noted that today’s youth by and large appear to know more about social media than their parents.

“I find particularly the younger kids are so adept at this new technology with smart phones and the Internet. What I see coming into my office unfortunately on the criminal side, I want to make sure our kids are protected. What they are doing on the Internet, the information that they are sharing about themselves and who they are talking to is very important for parents to know. The kids need to understand the bigger picture and the larger ramifications because not everybody out there is somebody you want to talk to,” she said.

Deputies say they believe the man lured the girl to a local church for the purpose of a sexual encounter.

Masto said parents should be extra aware of the time their child spends on social media each day and pay close attention to the Internet sites children are logging onto.

She also stressed communication at an early age.

Masto’s work has resulted in new laws strengthening the registration and notification requirements of convicted sex offenders and preventing a person from luring someone believed to be a child.

During her presentation the attorney general told the students how her office works to get the “bad guys” each day.

“It’s happening here and every community in our state. In my office, we actually are the investigators and prosecutors. We are the ones who lure the predators so they are not preying on our kids. We have laws that allow us to pretend we are the 12-year-old so that we can lure those predators. We have seen horrific cases here in Nevada and we want to make sure our kids are protected and they don’t become that next statistic,” she said.

On average there are more instances of bullying taking place at the middle school level.

As such, Rosemary Clarke Middle School implemented a system that allows bullies to be reported anonymously.

The Nye County School District has a strict anti-bullying policy for both students and faculty members alike.

Failure to report bullying witnessed by district employees, for instance, could lead to disciplinary action.

When speech or acts of harassment, intimidation, bullying or cyber-bullying occur off campus, officials only have authority to respond if the impact of the speech or action will substantially disrupt school or will interfere with the rights of others at school.