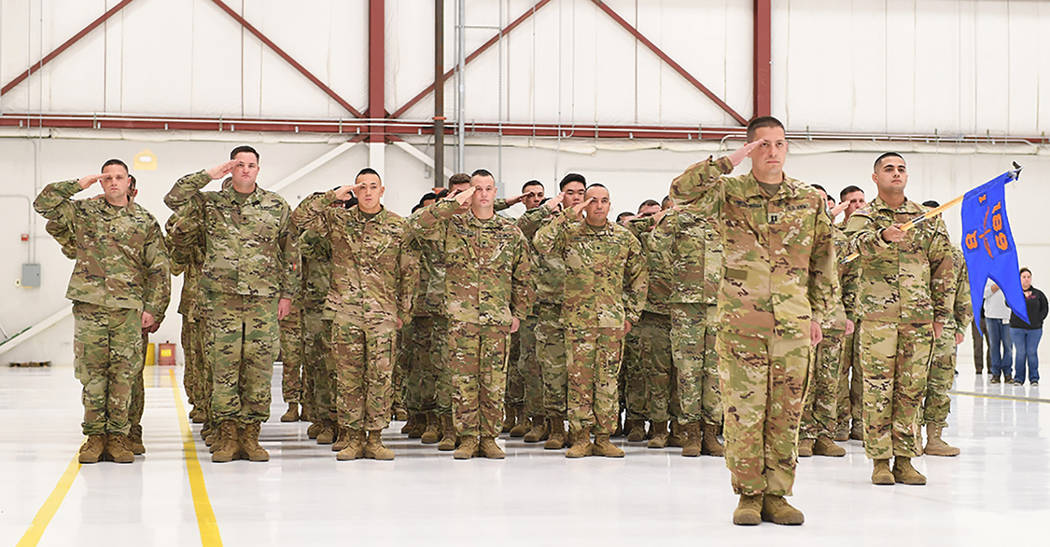 Sgt. Zandra Duran/Nevada Army Guard Soldiers in the Nevada Army Guard's Bravo Company, 1/189th Aviation salute during the National Anthem at the start of the unit's mobilization ceremony in Reno. The unit is set for fly and maintain CH-47 Chinook helicopters in southwest Asia for the next nine months

Fourteen years after the unit first deployed to southwest Asia, the soldiers in the Nevada Army Guard’s Bravo Company, 1/189th Aviation once again began a foreign mission to the same general location.

Their deployment began Oct. 27 with a mobilization ceremony at the Army Aviation Support Facility near the Reno-Stead Airport.

About 60 soldiers participated in the ceremony that marked the start of the unit’s nine-month mission that will begin in Kuwait within a few weeks. Some soldiers will stay in Kuwait while others are likely to be based in Iraq and Afghanistan. The unit operates and maintains the Nevada Army Guard’s fleet of Ch-47 Chinook helicopters.

The unit’s soldiers were set to fly to Fort Hood, Texas, following the mobilization ceremony, but weather and a coordination issue with the fort caused the departure to be postponed. After reaching Fort Hood, the soldiers will conclude their pre-deployment training for a few weeks before heading for Kuwait.

The unit’s 2005 deployment is the most renowned in Nevada Army Guard post-9/11 history. The unit, then known as Company D, 113th Aviation, experienced the ‘Mustang 22’ helicopter attack in Afghanistan in Sept. 2005; five soldiers perished in the attack, including Nevada Guard Soldiers Chief Warrant Officer 3 John Flynn and Sgt. Patrick Stewart.

In the interim since the 2012-2013 deployment, the Nevada Army Guard upgraded its fleet from the D to F model Chinooks. Although Nevada’s Chinook aircraft will accompany the unit to Fort Hood, those aircraft will remain stateside and the unit’s soldiers will fly Chinooks already in place in the region.

B. Co., 1/189th Aviation is an element of the 189th Aviation Regiment, which is headquartered in Montana and managed by the Montana Army Guard. Nearly 1,300 of the regiment’s soldiers from across several western states are set to deploy along with B Company’s Nevada soldiers.