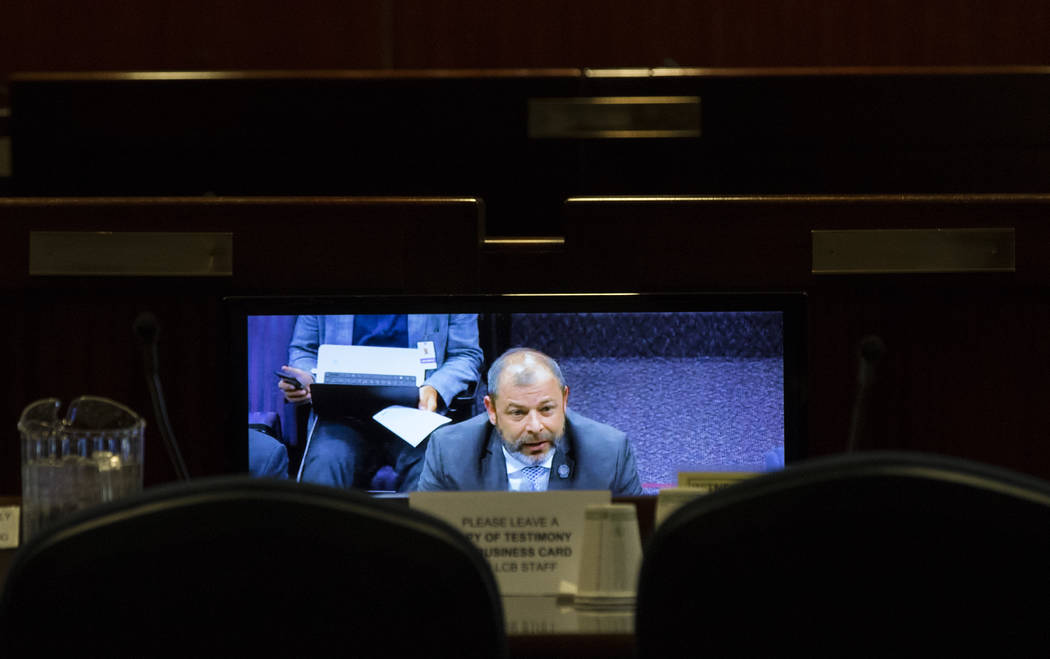 Miranda Alam/Las Vegas Review-Journal Assemblyman Paul Anderson speaks during a video conference earlier this year. During a separate appearance in Reno, Anderson said that Nevada businesses that pay the state’s Modified Business Tax (payroll tax) are in for a tax break.

Nevada’s Economic Forum — the state’s five fiscal forecasters — recently projected the state will have $96 million in added tax revenue for the next biennium state budget, $140 million when you also consider savings from the current state budget.

“Every business that has an employee, they will see a deduction in their Modified Business Tax,” Anderson said at a recent Battle Born Politics gathering sponsored by the Reno Gazette-Journal.

In 2015, when lawmakers passed the largest tax hike ($1.4 billion) in state history, they included a provision to lower the tax rates if tax collections got too hot, Anderson told the crowd at Midtown Reno’s Craft Wine and Beer Bar on Martin Street.

“We set (tax-cut triggers) into place the last time (2015 session), with the Commerce Tax, the Modified Business Tax, the Insurance Premium Tax and a couple of others mixed into that,” Anderson said.

Anderson said lawmakers included the trigger to lower the tax into the 2015 tax plan so there would not be a repeat of what happened in 2003.

“We did that because back in ‘03, we saw a big tax increase,” Anderson said. “There was this huge windfall and the government ended up rebating that in DMV fees.

“So we didn’t want that,” he continued. “We want to make sure we have a rainy-day fund and a healthy ending-fund balance. But we didn’t want a windfall for the government to just spend frivolously. And so we put a cap in there to make sure it would buy down and keep that at a managed level.”

How much businesses will save on the MBT cuts remains to be seen, Anderson said: “Good question. That will be one for the Economic (Forum) forecast to figure out.”

State revenues from the modified business tax and other taxes may not go down, based on the tax cut, Anderson said.

“They’ve got to figure out how much new business is still moving into the market and what the modified business tax will be,” Anderson said. “I think even then, we will see more revenue because the businesses are growing, although the rate of the payroll tax will be a bit less as we ratchet that down.”

Nevada economy on the rise

The significance of the $96 million surplus should not be underestimated, said Cheryl Blomstrom, interim president, Nevada Taxpayer’s Association.

Nevada hasn’t had a surplus like this for awhile. Blomstrom said the Economic Forum’s projections were uplifting.

“It’s good to seen economic recovery actually happening and have it bear out in our numbers,” Blomstrom said Thursday on Nevada Newsmakers. “There has been some talk about a recovery but this is absolute proof that this is the case.

“In addition to the money they allocated and projected and will be allocating, there were other signs of recovery that were talked about by the various economists,” she said. “And I think we are still on an upward trend. And that is the thing I took away from that Economic Forum meeting, is that we are improving.”

The Economic Forum projected $44 million more in tax revenue this year due to the strong economy, the last year of the current budget, and $96 million more in the new proposed two-year budget that will start July 1. That’s $140 million in all. Some of that is already earmarked to help Northern Nevada flooding due to the record-setting wet winter.

“While we all prayed for rain, apparently we prayed a little too much,” Anderson joked. “Now, we’ve we’ve got to spend some money on flood control. So there is about $12 million allocated. It’s a one-shot allocation, to go back and fix some of things that have happened because of the floods. It’s a great blessing to have, a great burden to have, at the same time. But we’ve got to spend some money on it.”