By Keith Rogers and Steve Tetreault Special to the Pahrump Valley Times
November 26, 2014 - 8:00 am 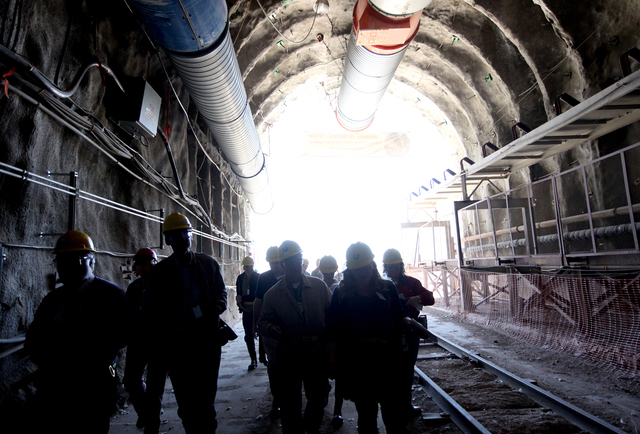 With a change in U.S. Senate leadership after the midterm election, Nevada Nuclear Projects Agency chief Robert Halstead says he has been assured by the staffs of Nevada’s senators that both Senate Majority Leader Harry Reid, D-Nev., and Sen. Dean Heller, R-Nev., a member of the Committee on Energy and Natural Resources, remain strongly opposed to the Yucca Mountain nuclear waste project and are “well-positioned and working together to protect Nevada’s interests.”

Halstead made the observation before last week’s state Commission on Nuclear Projects meeting in Las Vegas. The commission, with its chairman, former U.S. Sen. Richard Bryan, leading cheers, approved a 44-page report that was sent to Gov. Brian Sandoval and state lawmakers.

The annual assessment alerts them that the funding-starved Yucca Mountain project, which Reid had stymied during his eight-year reign as Senate majority leader, is not dead yet and they should press on with their opposition.

Otherwise the mountain 40 miles northeast of Tonopah could be put back on track by the Republican-controlled Congress to entomb tens of thousands of tons of highly radioactive used fuel that is decaying while it continues to be stored temporarily at commercial power reactor sites in other states.

The federal government has spent roughly $14 billion of nuclear power ratepayers’ money studying Yucca Mountain for nearly a quarter of a century to determine whether it can contain spent fuel and highly radioactive defense wastes safely. Some of the money was used to dig a 5-mile exploratory tunnel.

If a license is granted by the Nuclear Regulatory Commission for the Department of Energy’s repository after surviving court battles and at least 219 technical challenges by Nevada over perceived flaws with the site and design of engineered barriers, work to build it would be just beginning. Almost $100 billion would have to be spent on drilling 55 miles of drifts off the main emplacement tunnel. The cost probably would include building a new rail line to haul waste to the remote site.

But as Nevada leaders say they remain vigilant on Yucca Mountain, there are small signs the landscape might be shifting in Washington on the nuclear waste site.

Sen. Patty Murray, D-Wash., last week urged the Nuclear Regulatory Commission to move forward on considering a license for the Nevada site. Murray, who is up for re-election in 2016, represents the Hanford Nuclear Reservation, where the government has struggled for years to clean up Cold War-era nuclear bomb waste. The waste once was destined for Yucca Mountain.

With the work the NRC has put in already on a Yucca Mountain application and with billions of dollars spent at Hanford and other nuclear waste sites, “it is imperative that the Yucca Mountain licensing application is thoroughly considered by the NRC,” Murray said in a letter to NRC Chairman Allison Macfarlane.

The letter from a senior Democrat serves as a reminder that the push to store nuclear waste in Nevada is not necessarily a partisan matter but rather pits the state against others that are holding radioactive material and want to get rid of it.

Murray also is in the Senate leadership. Her step away from Reid, who has worked to kill the Nevada site, garnered some notice in the nuclear industry and on Capitol Hill.

Observers are looking to see whether Reid, who lost some luster in the midterm elections and who will be in the minority in the next Congress, has lost a step on Yucca.

But it wasn’t the first time Murray has spoken out. In 2010, the last time she was up for re-election, she criticized the Obama administration’s shutdown of the Yucca site and sponsored an amendment that would have given the project $200 million to stay open. At the urging of Reid, Democrats killed it in the Appropriations Committee.

Reid’s office did not comment on the latest Murray letter.